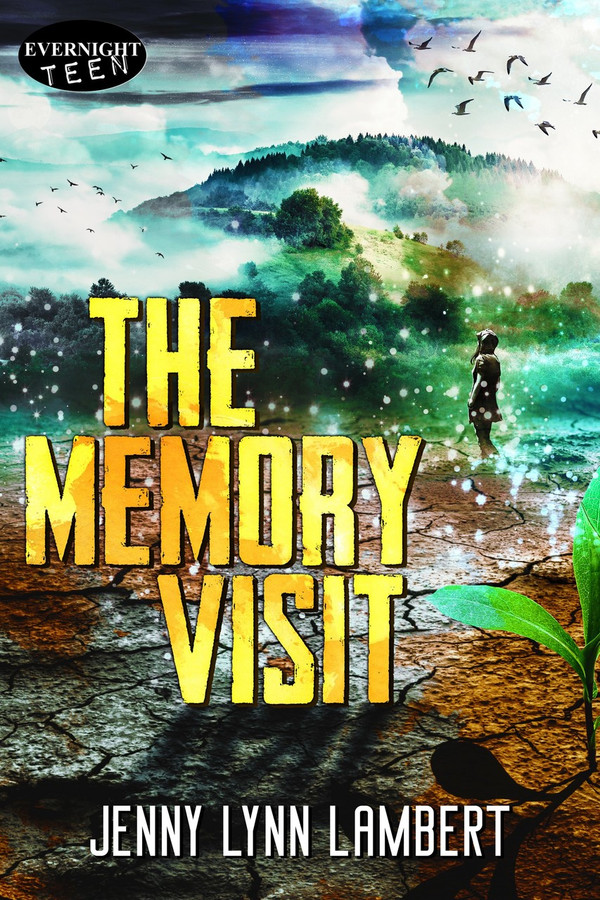 All a person needs to escape the bombed-out cities and tormenting thirst of NorCoast is a fifteen-minute Memory Visit. Seventeen-year-old Rain, however, is not looking for an escape—she needs answers. When flashbacks of her twin brother’s drowning start to overtake her life, she relives that horrible day via a laser probe straight to her brain’s hippocampus.

What she discovers in the Memory Visit is even worse than she thought. Her twin brother, Dal, was murdered, and she is a mark, one of the remarkable people who can alter the past through her memories. Using her newfound ability, Rain attempts to save her brother only to become a target of the assassins who killed him. Soon, she must decide whether rescuing a brother she barely knows in the past is worth risking her life and the lives of people she loves in the present.

I knocked twice on the door before stepping inside. “I want answers.”

His focus darted around the room like he was trying to find an escape route. “Look, I don’t know what to tell you. Dr. Strauss is the man with the answers.”

“You saw the scan. You were alarmed by what you saw. Tell me what it was.”

“I can’t…” He looked back at the computer screen and bit his lip.

“Imagine being in my place. I have a right to know what’s going on.”

He glanced from me to the computer screen and back again. I tried laying on a little guilt. “Come on, Rio, don’t send me out there wondering if I’m ripe for a stroke or something.”

“What’s on that screen?” I quietly closed the door and stepped behind Rio who made no move to stop me.

It looked like medical records. Classified. I leaned in close to better see the picture of the patient at the top and gasped. Even though the few memories I had of this man’s face were fleeting and blurry, and even though this picture was taken when he was about my age, there was no denying the fact that this was my father. The name under the picture confirmed it, Hudson Shattuck.

“Do you know him?” Rio asked. He must have realized that Hudson Shattuck was related to me. First, we had the same last name. But even if that weren’t true, my father and I looked more like twins than Dal and I did, with the same olive complexion, high cheekbones, deep-set eyes, and frizzy, dark-brown hair. The only difference, which might have thrown Rio off, was that my eyes were pale blue while my father’s eyes were practically as dark as his pupils.

“I think I’ll do the questioning right now, thanks. Why are you looking at his file? Does it have something to do with me?”

He looked at the door like he was expecting someone to barge in at any moment. “I wanted to see if we had any records of what I just saw on your scan. This is the only one.”

“And what exactly did you see?”

“You’ve got to be more specific if you want me to leave here peacefully.”

He gazed at me like a child discovering the stars. “Your brain activity was unlike anything I’ve ever witnessed. It was off the charts in amount, in intensity, in duration. Simply amazing.”

“Is that a bad thing? Am I going to die of cerebral hemorrhage or something?”

“No, no, it’s perfectly fine. If not, Dr. Strauss would have told you.”

“Then why did he ban me from Memory Visits?”

“I don’t know. And what’s more puzzling, is that this man did Visits. He did quite a few, actually.”

I scanned the document. Five Memory Visits were listed. By the dates, my father was young when he took them, not much older than I was. “So I can take a Memory Visit.”

Rio frowned. “No, you heard what Dr. Strauss said. You’re on the blacklist for all the clinics.”

“I know of other places that don’t have blacklists.” I tilted my head and grinned at him.

His eyes widened. “You’d go to a back alley brain probe?”

“Thanks for your help.” I turned to leave and felt a hand on my arm.

“Why not? What’s the worst that could happen besides losing my job and having to clean compost toilets for a living?” Rio’s smile was still as charming but not quite as persuasive as it was when I first arrived.

“I need a better answer than that.”

“All right. Seriously, I’ve been a tech here for five years, and I’ve never seen anything like what I saw today on the imaging screen. I have to see for myself what a Memory Visit would look like with your brain doing it.”

“Really? You just want to see what would happen? I’m not your science experiment.”

“Well, think of it this way, it wouldn’t be a bad thing to have me there. I can check the equipment and keep you safe.”

Good point. It wouldn’t hurt to have an expert along for the ride. If he wanted to risk his career to satisfy some intellectual curiosity, then who was I to stop him? “All right, let’s go.”

“Right now?” Rio glanced nervously at the clock on his computer.

I would have loved to go right then, but I was scheduled to work in a couple of hours. “Tomorrow night. I’ll meet you at the Cadero Station around sunset. Eight o’clock.”

“The place I’m taking you to doesn’t operate during normal business hours.” I turned to leave. “And by the way, dress down for this. You don’t want to make yourself a target.”

This last comment was overly dramatic, but I really needed to see if this guy knew what he was getting himself into. Cadero was not for the faint of heart.

This story is a genius work that is written with a style of narration that allows the reader to live through the eyes of the main character, Rain, as she goes on thrilling adventures with her companions. Neither pain, danger, nor death can keep Rain from protecting the people she cares about, even if it means losing everything she loves in her current life. While reading this book, I felt as if I was in the story, which kept me on the edge of my seat the whole time!

Was captivated from the beginning to the end! This action-packed story takes you on a unique adventure that captivates the mind and transports you into a wild dimension of wonder. A great escape with appeal for all ages. If you’re looking for something different to free your mind and be entertained – this is it! Thank you, Jenny, for an amazing book! (While this says Kindle edition, I actually bought the book and it was worth it!)

Exciting dystopian novel! The kind of book you think about when you’re not with it. I love that! Suspenseful, exciting, smart. I loved this book!

Ms. Lambert takes us through the dystopian world that Rain inhabits and helps all of us who have wished we could change the past to realize what that may entail. This story is a page-turner as the reader becomes familiar with well-developed characters, life with limited water supplies, and a world where companies invade their employees' lives in life-changing ways. It gives the reader much to mull over when finished. A great read!

The novel centers around Rain, a seventeen-year-old girl looking for answers about a memory of her brother dying. In NorCoast, our seemingly post-apocalyptic future which is low on water, one can venture to the past to relive memories as a way to escape the troubles of the present. Only when Rain tries to find answers about her brother, she picks up a thread of the past involving conspiracy, her brother's murder, and more sinister plots. Through her trips to the past, Rain learns she's a Mark, a person who can actually change a memory and therefore alter the past up to the moment she went back (her present). In multiple attempts to save her brother, and multiple threads of possible lives, Rain comes to learn that the people behind it all won't stop until she's dead and that she and Evin, no matter what thread they appear in, are linked by more than just destiny. Rain must put her heart and future on the line to save who she loves most, even though that doesn't seem clear-cut anymore. The dystopian world was well-built from the dry barren lands where the outcasts live to the the Utopian lush greens of Oasis. The corporate-run country is not too far off the mark for the US's possible future. The characters are well-developed. Rain is strong, defiant, and quick thinking--not your damsel in distress. Rio and Evin are both adorable in very different ways and the tension between Evin and Rain is palpable, letting readers see without dialogue how deeply they feel for each other. Rio played a smaller part than expected through the second half of the book, but I was glad not to see a typical love triangle. The complex and changing timelines and pasts might be difficult for some readers if they don't pay attention to detail, but I had no issues. That being said, I have always loved time travel novels. They blow my mind with how changes in the past echo into the present and Lambert does an excellent job of showing us what can truly happen if we alter the past--both the good and terrible things that could result. The open ending of this book shows it will be part of a series, and I'm eager to see more of the same timeline jumping, past changing, and corruption fighting plot until Rain can have a happily-ever-after future.

I finished reading "The Memory Visit" yesterday. The pages flew by. Jenny Lynn Lambert created a story that is complex and the characters well developed. This is a story of changing the future by going to the past while being chased in the present. The heroine is a young woman that juggles saving her brother while risking her closest friends' lives. It becomes a dilemma that the reader is compelled to journey with her. I loved this book and I can see the set up for a sequel. I hope Ms Lamber will serve us part two of Rain's story. Buy this book and share with friends. It's definitely worth the read.

A great new dystopian world—a world where water is scarce and one teen can change it all. Amazing imagery, with the contrast between Oasis and NorCoast. I couldn’t put it down. I was so caught up in Rain’s difficult journey to save her brother and possibly lose those she loves—It was a good thing I was reading on my Kindle.