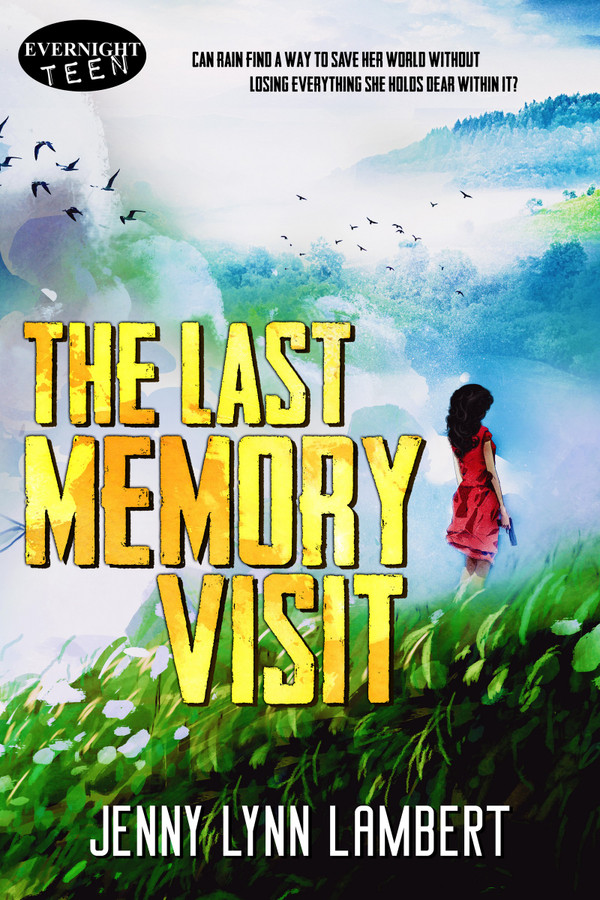 In a battle for a better existence, Rain Shattuck once again uses her special ability of changing the events of history through her memories. The stakes are higher now. Not only must she use Memory Visits to rescue her boyfriend and her twin brother in the past, but she must also join forces with a band of outcasts in a war to end corporate corruption in the present.

Unfortunately, combat on all timelines comes at a cost. Whether in the past or the present, each attempt Rain makes at securing justice pushes her further away from the people she cares about. Can Rain find a way to save her world without losing everything she holds dear within it?

A stream of morning light from the bay window illuminates dust particles floating in the air. A cool breeze lifts the sheer curtains, sending goosebumps along my arms. On the couch next to my recliner, Dal’s and Evin’s voices rise in an intense conversation about their latest virtual reality simulation, some sort of modern spin on the classic Dungeons and Dragons game. Evin glances over at me just as I check my watch.

Evin’s voice resonates in my ears, filling my body with his energy. It’s all I can do to keep myself from gazing into his deep, gray eyes. I want to run to him. I want to press hard against him, nuzzle into his neck, and breathe him in.

I have to control myself. “Almost,” I say, avoiding eye contact by busily folding the thin blanket that I had draped over my bare legs. If Evin notices the blank stare of my Visited self, he could react, changing the course of events.

“I’ll get us some waters,” Dal says. “It’s going to be hot today.” He jumps up and heads to the fridge. I wish I had started the Visit later in the memory. I don’t want to be left alone with Evin. It’s too tempting to join him on the couch and wrap myself around him. But, then again, why not? What can it possibly hurt to forget the stupid door trick and convince the boys to just stay inside today to watch a movie or something? Maybe this new plan will work better. Evin and I can snuggle together safely until the Memory Visit is over. I just can’t let him notice my lifeless eyes.

Dal returns with the waters and hands one to me and one to Evin. My brother’s eyes are brightly expressive, which proves my suspicion. While the Dal in the beige dentist chair is somewhere inside this Dal, observing from a deep recess of memory, he is not a Mark.

“It’s going to be too hot walking back home from Rosie’s. How about we have breakfast here instead?” I suggest.

“No way,” Evin says, rising from the couch. “Dal owes me a stack of Rosie’s pancakes, and I’m cashing in.”

Evin crosses to me and reaches out for my hands. “Come on, Lazy Bones. Let’s go. Don’t you want that strawberry waffle you’ve been talking about?”

It’s too hard to change the plan. I’ll have to go with it. I grab his hands and let him pull me up to my feet. Instead of embracing Evin like my body wants, I brush past him to beat Dal to the door. Even that brief contact with Evin makes me catch my breath.

The brass doorknob feels cold to the touch. Through the small opaque window centered in the golden oak, bright blurred colors glow in the mid-morning sun. Evin is so close behind me I can feel the warmth of his body. For a second, my right hand, following messages from my heart instead of my head, loosens its grip on the doorknob. I take a deep breath, remembering what I’m here to do. I unlock the deadbolt with my left hand and turn the handle with my right.

As I yank open the door, it bounces off my strategically placed foot and slams shut again. I grab my left thumb and yelp in feigned pain. My yell stops short when the front door opens again, this time to Mrs. Munroe’s round puffy face. Her pin-cushion eyes emit a blank stare. I know that stare. Mrs. Munroe is not in control of her actions. At least, this Mrs. Munroe isn’t. Sometime in the future, WaterPure agents get ahold of Mrs. Munroe, bribe her or blackmail her, maybe even torture her like they are known to do, and make her a killer. I don’t have time to think about how WaterPure knows our plan because the gun is already firing.

I slam my shoulder into the door and pin half her body against the door jam. Her right arm is still free, firing at odd angles like her elbow is on some sort of swivel. Bullets pierce couch cushions, puncture walls, and shatter the living room window. With my right shoulder braced against the door, I bring my left arm up over my head and slam it down on her elbow. The gun clatters to the floor and slides into a pool of blood that is growing around Evin’s motionless body.

I can’t move. I can’t believe what I’m seeing, and I can’t move. Next to Evin, Dal struggles to his feet, holding his side. He’s been shot, too, but I don’t know how badly. He’s looking at me with fear in his eyes. No, he’s not looking at me. He’s looking past me. A formless shadow creeps alongside my own on the hardwood floor, stretching toward Evin. I fall to my knees in front of Evin’s prone body. I am reaching for the gun when I hear Dal’s scream.

Or is it my own? Mrs. Monroe’s foot on my spine flattens me onto the floor. The shadow of her hand holding a knife, the perfect size for cutting cake, takes shape on the hardwood beside me. I reach for the gun again, but it’s gone. As the shadow knife drops to its target, me, a single gunshot rings out. I look up just as the smoking revolver slips from Dal’s hand.

A very well written young adult novel. Lambert describes the dynamics of a dystopian society with climatic and technological concerns that will feel very current and relevant to any reader. Great ending that leaves you wanting for more.

This is a tremendous debut novel. The story shows a lot of imagination and weaves in some very important issues that resonate with some of the challenges we are facing in the real word. The author has a great feel for building the story's characters and dialogue. A great read for teens who are making their way from kids to becoming socially conscious young adults.

A great new dystopian world—a world where water is scarce and one teen can change it all. Amazing imagery, with the contrast between Oasis and NorCoast. I couldn’t put it down. I was so caught up in Rain’s difficult journey to save her brother and possibly lose those she loves—It was a good thing I was reading on my Kindle.

I really enjoyed this book! It's a very exciting and suspenseful story. Once I started this, I couldn't put it down and grabbed every opportunity to pick up the book to keep reading it. The main character, Rain, is such a strong, smart and likable character. I was sad when the story came to an end. I'm really hoping for a sequel!

Ms. Lambert takes us through the dystopian world that Rain inhabits and helps all of us who have wished we could change the past to realize what that may entail. This story is a page-turner as the reader becomes familiar with well-developed characters, life with limited water supplies, and a world where companies invade their employees' lives in life-changing ways. It gives the reader much to mull over when finished. A great read!

The novel centers around Rain, a seventeen-year-old girl looking for answers about a memory of her brother dying. In NorCoast, our seemingly post-apocalyptic future which is low on water, one can venture to the past to relive memories as a way to escape the troubles of the present. Only when Rain tries to find answers about her brother, she picks up a thread of the past involving conspiracy, her brother's murder, and more sinister plots. Through her trips to the past, Rain learns she's a Mark, a person who can actually change a memory and therefore alter the past up to the moment she went back (her present). In multiple attempts to save her brother, and multiple threads of possible lives, Rain comes to learn that the people behind it all won't stop until she's dead and that she and Evin, no matter what thread they appear in, are linked by more than just destiny. Rain must put her heart and future on the line to save who she loves most, even though that doesn't seem clear-cut anymore. The dystopian world was well-built from the dry barren lands where the outcasts live to the the Utopian lush greens of Oasis. The corporate-run country is not too far off the mark for the US's possible future. The characters are well-developed. Rain is strong, defiant, and quick thinking--not your damsel in distress. Rio and Evin are both adorable in very different ways and the tension between Evin and Rain is palpable, letting readers see without dialogue how deeply they feel for each other. Rio played a smaller part than expected through the second half of the book, but I was glad not to see a typical love triangle. The complex and changing timelines and pasts might be difficult for some readers if they don't pay attention to detail, but I had no issues. That being said, I have always loved time travel novels. They blow my mind with how changes in the past echo into the present and Lambert does an excellent job of showing us what can truly happen if we alter the past--both the good and terrible things that could result. The open ending of this book shows it will be part of a series, and I'm eager to see more of the same timeline jumping, past changing, and corruption fighting plot until Rain can have a happily-ever-after future.