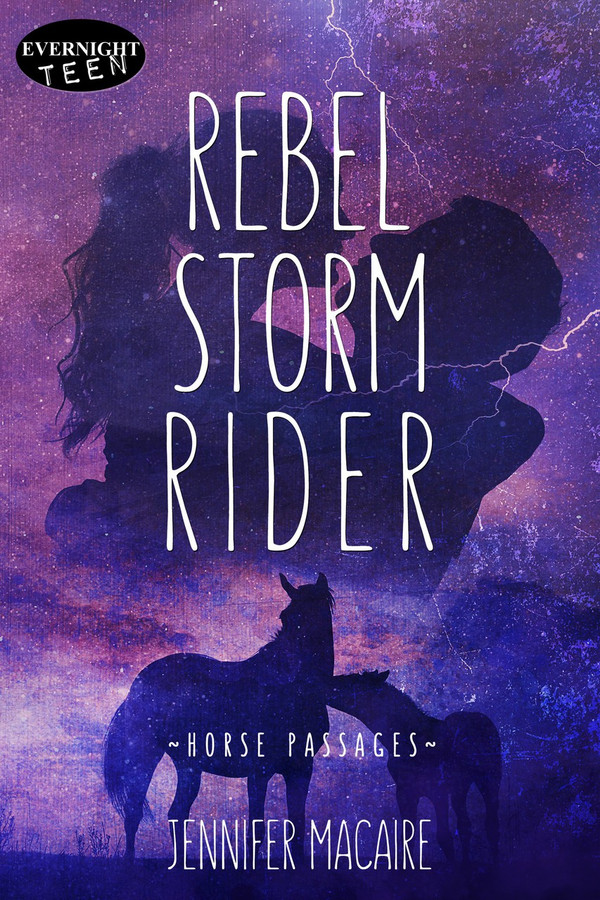 When intergalactic herders Carl and Ruby Cadet find a Raider baby in a wrecked spaceship they decide to keep her as their own daughter. Raiders are considered the scourge of the galaxy and the Federation, never having captured a Raider alive, demands they give her up. When Carl and Ruby refuse, the Federation declares Carl and Ruby outlaws and sends Raider hunters after them. The hunters have been given an order: capture the baby alive but eliminate Carl and Ruby if they have to. Despite the danger, Carl and Ruby decide to go rogue and flee. Their only hope of saving themselves and the baby Raider lies with their space-travelling horses, and the mysterious Horse Passages.

Carl held his hand up. “Shh. Listen.” He froze, and then swore loudly. “By the gods of the eight corners of the universe!”

“No time to explain. Just start packing! We have to leave!” Carl grabbed Boo’s bridle, slung his saddle over his shoulder, and dashed out into the rain.

Ruby didn’t waste time trying to imagine what was happening. She put Sally in the crib, feathers and all, clipped on her harness and zipped the top closed. She put everything else lying around in a bag, including a half-open pack of hydrolyzed lasagna and Sally’s milk bottles. She rolled up the sleeping bags, grabbed the clothing satchels and Sally’s cradle, and she put everything under a tree right outside. Then she turned to the new tent.

It was a domed construction and folded into a package small enough for one person to carry. First she had to pull the stakes out all around it, then take down the two awnings. The tent then flipped over by itself and all Ruby had to do was fasten the pack tightly, pick it up, and put it on their pile of belongings. She put the campfire out, quickly unstrung the fairy lights in the trees, and shoved them in a bag. Now, under the tree, there was the tent pack, the clothing satchels, Sally’s bag, the supply bag, and her saddle and bridle. Just as she finished, Carl rode up on Boo. He led the three other horses, and had the foal slung over his lap. He wore the corral rope coiled around his shoulders.

“Ruby, you’re a wonder,” he said, sliding to the ground while carefully holding the foal. He set her down and then he grabbed the tent and bags and lashed everything on the pack horses while Ruby saddled and bridled Shade. When she finished, she made sure Sally was securely strapped in the cradle then fastened it to the back of her saddle.

Carl came over, checked the cradle, Shade’s girth, and then boosted Ruby onto Shade. “Be quiet, and follow me.”

“Should I be worried?” Ruby asked in a low voice. “Is it the Federation? Was that a spaceship?”

“Did you hear it too?” Carl lifted the foal onto Boo then mounted. He juggled the pack horses’ leads and then nodded toward the river. “I thought it was thunder, but it is a spaceship. There’s no reason for one to come here unless they’re looking for us. We were camped down by the river—so that’s where they are right now. I saw their lights. They’ll figure out soon enough we left, and they’ll be combing the area. The rain will slow them down. We won’t show up on their scanners. As soon as we get out of the woods, we gallop away from the river, all right? I’m hoping Boo will open a passage for us so we can slip away.”

“I’m right behind you,” said Ruby. Sally was starting to fuss in her cradle, but she wasn’t crying. She was just letting everyone know she was awake, and not happy about being cooped up in the dark. “Hush darling, don’t cry,” said Ruby.

In the rain, in the dark, Ruby could hardly see the horses in front of her. Boo’s nearly white coat showed up when lightning sheeted across the sky, the trees’ shadows zig-zagging across their path. The horses picked their way carefully through the woods, and then suddenly they were out on the plain. The full force of the rain and wind hit them, and Ruby gasped in surprise. She had her new hat on, and the brim kept most of the water out of her eyes, but the rain soaked her collar and ran down her back. It wet her reins and her hands kept slipping.

“The horses see in the dark—don’t worry. Let’s go!” shouted Carl, and he gave Boo his head.

Ruby grabbed her saddle horn as Shade bunched her muscles and launched herself through the pouring rain. Carl may have told her the horses saw in the dark, but she was still terrified. The rain slashed her face, and the dark was only lit by violent flashes of lightning that showed the grass nearly flattened by the wind. The horses pounded through the storm, and Ruby had to pull back on the reins to keep Shade from taking the lead.

“I know you’re the fastest, but stay back!” pleaded Ruby, gasping for breath. She was standing in her stirrups, bent over her horse’s neck, and praying that Sally would be all right.

Suddenly the horses slowed, and instead of a headlong gallop, started to trot. Ahead, Ruby heard Boo whinnying. She rubbed the rain out of her eyes with the back of her hand and tried to see through the dark. Thunder rumbled again, lightning sizzled, and a shimmering mist curtain appeared, waving crazily in the wind.

Carl wheeled Boo around and urged the pack horses in first. Then he came alongside Ruby. “Go, I’m right behind you,” he shouted. “Hang on tight. It’s going to be a rough passage!”

The rumbling grew louder and Ruby realized it wasn’t thunder. A blinding light shined on them, and she heard sharp cracks.

She went, screwing her eyes closed as Shade careened into the maelstrom of the Horse Passage. They fell through nothing, then there came a jolt hard enough to nearly knock the breath out of her. Shade uttered a sharp whinny and Sally wailed loudly in her cradle. There came another jounce, and Shade scrabbled like mad. Ruby felt her hooves bite, felt a giant lurch, and then they were out—past the last stinging veil of the passage, into bright sunlight.

She dragged air into her lungs and turned to see Boo and Carl surge out of the mist. Behind them, the curtain shimmered and vanished. “Thank goodness. We made it,” she cried.

“Thank…,” said Carl. Then he slumped over and slid off his horse, landing with a sickening crunch on the ground.

The best way to stay out of trouble is to never stop travelling. Will Carl and Ruby move fast enough to evade the hunters? Ruby has always been my favourite character in this universe, and this tale only gave me more reasons to love her. It was so much fun to compare her more assertive personality with the fairly timid girl she was when I first discovered the Horse Passages series. While I don’t know if the author is planning to write more about Ruby in the future, I’m sure hoping she will. There is so much more I’d like to learn about Ruby. There were some pacing issues. The storyline moved quickly in some scenes and slowly in others. As someone who has been loving these books so far, I would have been happy with either pacing style. It was jarring to switch between them, though, and I do wish that the narrator would have picked one of them and stuck with it. The plot development was great in this tale. I appreciated how much time the author spent exploring how The Federation operated and what it was like to live as a nomadic horse herder. Including so many details about these parts of the plot made it impossible for me to stop reading. I simply had to know more about the worlds that Carl and Ruby moved between! This is the third part in a series, but you don’t have to be familiar with the first two instalments to enjoy this one. It works well as a standalone story. Rebel Storm Rider should be read by anyone who is in the mood for an adventure.