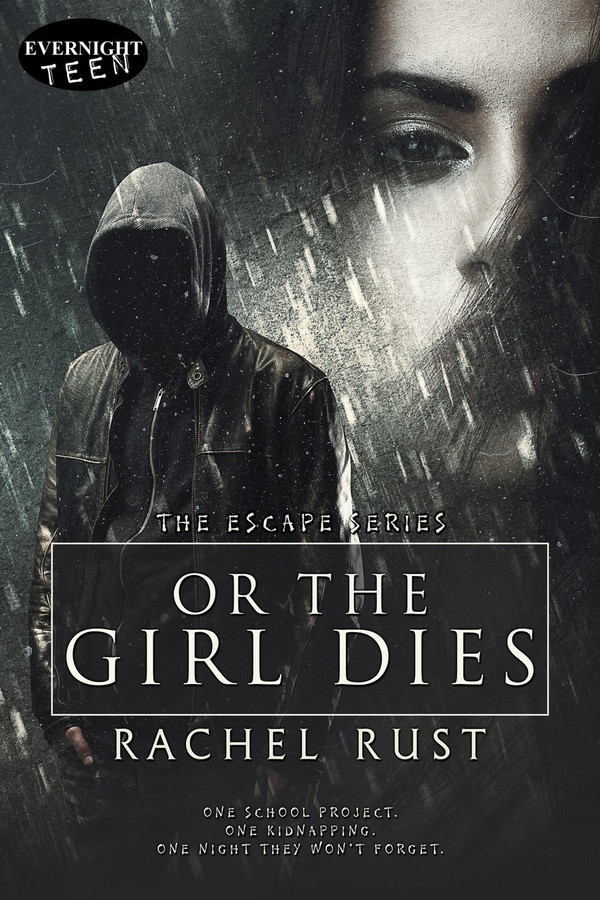 One school project. One kidnapping. One night they won’t forget.

Natalie is an honors student with perfect grades. Victor is a drug dealer with a cryptic past. When a school assignment forces them to work together, things quickly spiral out of control.

Victor fails to complete his part of their project, so Natalie hunts him down the night before it’s due. But Victor’s kingpin boss interrupts their study date and drags Natalie down into a seedy underworld where anything can be bought and sold—including her.

Over the course of one night—while dodging bad guys and trying not to inhale—Natalie discovers shocking truths about Victor. And she’ll need to choose between preserving her perfect academic future and helping him escape his troubled past.

Except one final revelation about Victor may be too much for Natalie to survive.

16+ due to language, violence, and adult situations

Inside the pocket of my backpack, my fingers finally managed to hook around one of the key rings. I yanked on it only to have my keys fly up and through the air, then land with a clank on the parking lot asphalt. A hand grabbed them off the ground before I could even bend down.

Victor Greer stood in front of me, holding out my keys, the multi-colored metals dangling in the air between us. I snatched them and opened my mouth to say thank you, but no sound came out. I remained idle, unsure if I should say anything about our assignment. I had never spoken a word to Victor before. He was a head taller than my five-foot-five frame with tan skin and dark brown hair that was always a mess. A healthy protrusion of pecs and biceps pressed out from under his worn t-shirt. But it was his reputation, not his stature, that silenced me.

Victor had transferred to Kennedy High at the beginning of the school year. He didn’t have any friends, yet he was always busy. Preoccupied. If he wasn’t asleep in class, he was on his phone. Texting, sometimes calling. Someone.

There were a ton of rumors about Victor. People said he had been held back a grade, maybe even two. He had Mexican cartel ties. He was a Russian spy. He had been infused with gamma rays and turned green when angry. Everyone in school had their favorite myth.

But there was one rumor that stuck and stuck hard—Victor Greer was a dealer. And not the car kind. Sophia said he had a brother who was in prison for federal drug distribution charges. And Josh once told me that Victor had taken up his brother’s helm at doing whatever it was that drug dealers do. Sell drugs and stuff, I assumed.

Victor took a deep drag off his cigarette and looked past me, over my shoulder. Black lashes fringed his dark brown eyes. On the inside of his wrist was a black tattoo—22. Nothing else, just the number 22. Maybe it was the number of people he had killed. Or the number of cats he had at home.

Smoke exhaled from his nose and Marlboro replaced ponderosa in my lungs. He gave me one last glance before turning to the driver’s door of his black Trans Am. It was smaller than Josh’s car, but just as loud when started up. Victor shut the door and drove away.

“This is so not gonna be fun,” I muttered as the impending dread of having to work with that guy settled into my stomach like a rock.

Uncaged Book Reviews High school, only ten days left until graduation, and the teacher pulls a partner assignment, and Natalie gets stuck with the biggest loser in the class, Victor – who seems to sleep the whole way through the class. Rumor is he’s a major drug dealer and a complete jerk – but if she doesn’t ace this assignment, her GPA will falter and her scholarship to college could be lost. This book spans over a 24 hr period and when her teacher and her father tell her she needs to figure out how to work with her partner, she sets her mind to make sure the assignment gets done. This is the night from hell, and the twists and turns this novel takes will have your head spinning. Natalie gets more than a high school senior could bargain for, and we are left on a roller coaster of danger and intrigue, and even though you are on the edge of your seat, there is a bit of humor to break up the tension. Natalie is thrust into a world she could never had imagined and all she wanted to do was keep her 4.0 GPA. Great fun. Reviewed by Cyrene

This the second book of Rachel Rust&#039;s which I have read and I cannot wait for the next book! So glad &quot;Or the girl Dies&quot; is part of a series because that means much more from this author. Excellent!

Had a little trouble buying into the premise and the main character&#039;s need to finish her project, but had a lot of fun reading. Fast paced story with lots of action.

Fun story, not terribly serious. Less romance than I expected but honestly I see that as a good thing. Constant action, very fast paced and easy to get through. Somewhat simple characterization. Easy read.

A suspenseful YA that starts innocently enough with high school academic, Natalie, and her need to get through one last team project in order to maintain her perfect GPA. The only problem? Her partner, Victor, is anything but easy to work with. Thrown into a whirlwind of violence, action, and danger, Natalie learns that Victor isn’t the worst person she could meet—there are others, and some of them are out for her blood. I loved how suspenseful this book was. At the beginning, I thought it was gonna be another typical love triangle between the outcast and popular guys but this story went on such a different tangent that I applaud it. I couldn’t guess the ending and it took me by surprise…I love books that are able to do that. For anyone that’s a fan of YA, thrillers, and action, I highly recommend this book and eagerly wait for book two!

&quot;A dark and gripping adventure that will entice you with its secrets and unyielding boldness.&quot;

The senior year of high school is all about looking to the future right? What happens when one night can change everything? When Natalie is paired with Victor for a class project that can make or break her opportunity to go to a prestigious college, she only has a couple of choices. But, when she tries to get Victor to participate in the project she finds that she bites off much more than she can chew. Natalie comes out of her bubble of the rich life and in one night wades through the dark underbelly of drugs and human trafficking. Each choice that Natalie makes is more difficult than the last. Throughout this one night and into the next day, Natalie is forced to choose between who she should trust and who she can trust. The author, Rachel Rust, tells the story from the perspective of Natalie in such a way that the reader feels entwined with the decisions that Natalie makes. From the fateful choice of trying to get Victor to do his part of the assignment to the desire to help Victor escape from the murky world in which he has become entangled. The feelings of Natalie are those which the reader can easily identify with. The dark situations and difficult choices are those which many readers and identify and may have even dealt with personally. While the age recommendation is higher due to adult situations and drug use, this story will resonate with many readers on a personal level. After struggling through the night, the reader is able to breathe a sigh of relief only to face more twists and turns into the story. The author acts as a fantastic story teller and keeps pulling the reader back into the story. Essentially the author teaches the reader to question those who walk in the world with us, and look at the underlying desires which drive us to struggle through each day. Make sure you don’t miss Rachel Rust’s fantastic book, Or the Girl Dies!

I received this book in exchange for an honest review. I have read one other book by this author and I simply love the story telling and how the writer develops her characters. This is the first book in the series and I would say it is a thriller/suspense novel. I believe the second book, will be more on the romantic side. Natalie is a do gooder that just wants to finish her last assignment before graduation, but the guy she is teamed up with is known as one that doesn’t have school as his top priority. Victor and Natalie are on the run from people following them and it is not as it seems. Victor is searching for his cousin that was taken from by his ex boss and poor Natalie gets wrapped into the huge ball of mess. I loved the ending to this book and cannot wait until the second one. I liked the huge twist and loved how it actually played out.

Natalie is realistic and likeable. When she finds herself partnered with Victor, new to the school and a suspected drug dealer, this straight “A” student struggles to get him moving on the assignment. But getting the project done becomes the least of her worries as the night spins out of control. The twists and turns keep the tension amped, and there is just the right smattering of romance. Looking for a fun thriller that will keep you engaged and guessing? Check this one out!

All Kinds of Bad by Rachel Rust

The Watched Girl by Rachel Rust