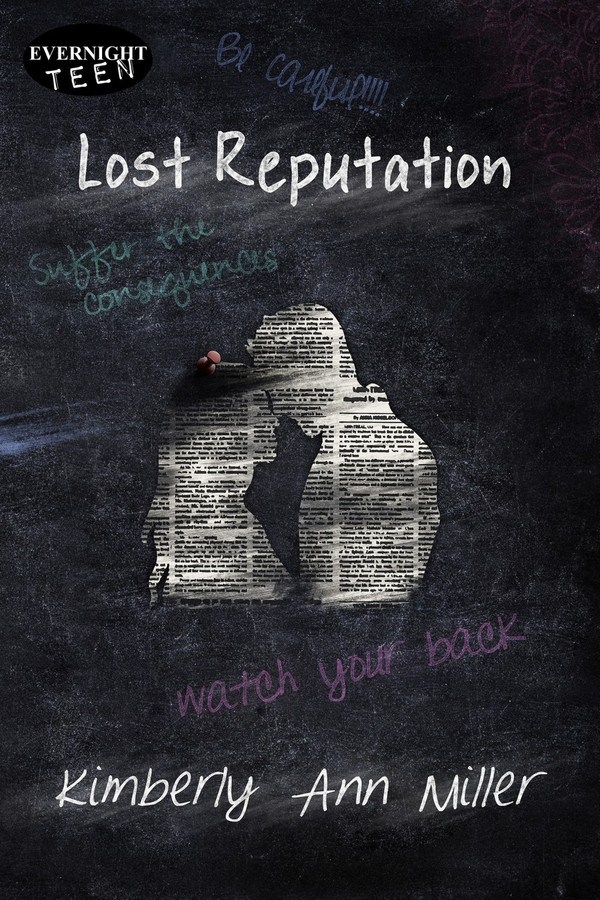 Casey Hayes has a secret—she writes the conspiracy theory column for her high school newspaper. As the editor, she thrives on the thrill of uncovering the facts—until she gets tangled up in a scandal.

When she exposes a teacher’s shameful secret, threats start, demanding she stop spreading the vicious rumors. Casey blows it off and keeps on writing. Even sexy Victor Cruz, the hot senior with the adorable accent who chases after Casey and tries to protect her, fails to convince her to keep her mouth shut. But things only get worse as she ignores the warnings, and soon, Casey must decide if exposing the truth is more important to her than her life.

I laughed at the memory as I locked up the newsroom and rushed to my next class. I still had a smile on my face as I plopped down on my seat in the back row of calculus. Victor Cruz, my secret crush, entered the room. My pulse reacted to his presence, but, thank God, no other part of me did that he could see. I didn’t want to be lusting after anyone this year because I was planning on working hard toward my college goals and didn’t need the distraction.

The worst thing was, Charli told me he gave his ex-girlfriend some rash because he cheated on her. I so did not do the sexually transmitted diseases thing, and I definitely had zero respect for cheaters. Not even for a hunk like him, who obviously screwed around and didn’t care if he got girls sick.

But damn, did this guy make my insides quiver. He was totally hot. His parents moved to New Jersey from Spain during middle school when Vic was scrawny and didn’t speak much English. When senior year started a month ago, no one recognized him because he’d grown ten inches, gained fifty pounds—of muscle—and must have taken some classes in style because, damn, the boy knew how to dress to show off his build.

Loose jeans with a belt, black boots, and a black, long-sleeved tee only made him sexier. And the way he walked? It should’ve been a crime. He had a swagger about him that rivaled any of the good old boys of Hollywood. Watching it made me quiver in places I didn’t know could quiver.

But it wasn’t just his looks that held me captive. He had the values of an old-fashioned guy—holding the door open for girls, helping them with heavy stuff, defending them when guys were too rough or mean.

If it wasn’t for that wild partying side of him … sigh.

As he approached his seat, I couldn’t help but stare at his thighs, mesmerized by the fluid sway they made with each step.

He caught me staring and raised a thick black brow. I diverted my eyes and pretended to be very interested in the junior’s notebook next to me. But I didn’t even know his name. Ugh.

Vic slid into his seat next to me and winked at the girls that were staring at him.

They always stared at him.

I rolled my eyes. But when I felt his eyes on me, I shifted in my seat, fighting the funny tingle in my stomach that came from looking at him.

The other problem was, besides being a distraction, Vic knew how sexy he’d become. He acted so cocky and confident, I wanted to smack the grin off his face and remind him that not long ago, he could have passed for a ten-year-old boy who couldn’t speak English or speak to girls.

But, whatever. He had a harem now, so good for him. And shiny black hair, smooth, bronze skin, and deep brown eyes that … never mind. Didn’t matter anyway.

Kylie sauntered over to him, swaying her hips so hard, I wondered how they didn’t dislocate. She leaned over his back and wrapped her arms around his ample shoulders, pressing her boobs into his back. I’m sure he loved that. “Hey, Vic. Busy this weekend? My parents are out of town, and we can go riding if you want. I’ll pack us a lunch.” She ran her fingernails over his chest as she spoke, clearly enjoying the feel of him.

He pulled her fingers off him and slipped out of her grasp. “Sorry, I’m busy, but thanks for asking.”

She leaned into him again, making sure to press her boobs into his neck. I rolled my eyes so hard, they almost didn’t return to face front. That would suck. What would I tell the nurse? I was looking at my brain instead of in front of me and I needed an eye adjustment?

I pulled out my phone to check messages, done with listening to the vixen and her attempts at charming the hottest guy in school.

“Hey, Casey,” he said in his sexy Spanish accent. He had this way of dragging out the end of my name, making it sound like Kay Seee.

It was both unsettling and adorable, so I just grunted at him. How else could I get anything done with him around?

A really fun read that tackles the effects of gossip and rumours on people&#039;s lives. And shows just how quickly news can travel and the impact it has on people&#039;s lives. Casey is a great character who makes no apologies in her quest for dishing out the truth. And some wild conspiracy theories! Her quick comebacks were funny and she&#039;s definitely not someone to mess with! Although I did want to shake her sometimes for giving Vic the brush off because hello? The guy was unbelievable. Total knight in shining armour wonderful. He even came to her rescue on a horse! Lost Reputation will keep you guessing and is definitely a book worth reading!

This book took gossip and the rumor mill to a whole new level. The pace really picked up as the story went on, and once I passed around the sixty percent mark, I had a very hard time putting it down. The chemistry between Casey and Vic was evident, even during the times that Casey didn&#039;t want to admit it to herself. I think the author did a wonderful job of showing the inner conflict in those instances. I debated about whether I wanted to give this book 4 or 5 stars, but in the end, I would rate it a solid 4.5. Casey was a strong, intelligent main character. However, there was one moment where she brushed off an event that I expected to trigger warning bells in her mind. I don&#039;t do spoilers, so I won&#039;t go into the details here. That being said, it didn&#039;t stop me from devouring the rest of the book. I very much enjoyed Lost Reputation, and think anyone who enjoys YA suspense with a strong dose of romance would love it.

**4.25 stars** &quot;Lost Reputation&quot; is a whirlwind YA romance/semi-mystery novel, starring Casey, who is allegedly obsessed with conspiracy theories, gossip, and spreading the &quot;truth.&quot; When she gets caught up with Vic, one of her classmates, her obsession takes a deadly turn for the worse. There are a lot of things I liked about this novel, namely that the characters are so vivid and varied. Character is the most important aspect to me, so having easy-to-remember people makes for a fascinating read. The mystery is fairly well written, though I have to admit that the twist of &quot;whodunnit&quot; didn&#039;t surprise me so much as make me a touch uncomfortable. Not that it was an easy guess, I think I just expected a little less of a convoluted reason for it all. The dialogue is very natural--and pulls no punches. There is a LOT of swearing in this novel, so parents buying this for their teenagers might consider reserving it for older teens, especially since things also get a little hot and heavy between Casey and her romantic lead (NOT explicit, but the implications are very much there). But it reads very well, and you can hear the characters&#039; voices in your head as you read. Ms. Miller certainly as an aptitude for dialogue, and it shows. At the end of the day, the only reason I felt the need to knock off one star was just... Casey herself. A lot of her actions puzzled me. She&#039;s strong-willed, but also brash and brazen and almost narcissistic in a way. Even in the end, where she needs to learn her lesson and move on with life, it seems to arise more from self-preservation than acknowledging that her actions have consequences on OTHER people as well. Yes, she does acknowledge it, but her life literally has to be in jeopardy before she takes the threats against her seriously. I think many readers will love her, but I found her to be a little too much, personally. It all comes down to the readers&#039; taste. She&#039;ll definitely shine with young women who always crave to be so strong and vocal--it just doesn&#039;t do anything for me, and since she&#039;s the narrator, some points had to be knocked off. In the end, would I recommend this? Yes--to older teens and adults. It&#039;s a sassy, driven story with vibrant characters and a strong voice. Love her or hate her, Casey leaves her mark--exactly as a reporter should. To that end, Ms. Miller did not fail to deliver.

Young adult mystery, I don’t think I’ve read one in this genre before. I am pleasantly surprised by this book. Casey writes the conspiracy theory column for her high school. But soon threats and warnings start plaguing Casey. Will she let a story risk her life or give up before she’s found all the answers? Casey. Is. Fabulous. Seriously, I love her. She feels so real and I swear I saw a little of myself in her, lol. She has a lot of spunk and drive. I really like reading from her point of view too. Victor is the hot senior trying to protect and crush on her. I really like this addition of romance. It rounds out the book plot perfectly. It isn’t all high school drama either. There may be drugs in the cafeteria food and a teacher may be having a relationship with a student. That alone kept me reading but Casey really makes it hard to put the book down. There are several twists and revelations at the end, let me tell you, I didn’t get them all right! ​ Lost Reputation is a must read. Forget the fact that it’s young adult (even though that part is fabulous), if you enjoy a good mystery this should be on your list to read!

Fantastic, fast-paced YA read filled with suspense, twists and turns, and romance!

**SPOILER FREE** Very impressed with this book and how everything all played out. Well written! This was a page turner for me. I just had to keep reading to see what the final outcome of everything will be. You won&#039;t believe what is behind this cover! *Received for an honest review*

An thrilling take on rumors, gossip and conspiracy theories. Casey writes a column for the school newspaper and finds herself getting deeper and deeper in trouble as truths are revealed and lies threaten not only her friends, but her life as well. This story unravels with the help of her best friend Charlie, cousin Mase, love interest Vic and his brother Hunter. A great YA read!

Lost in Wonderland by Nicky Peacock