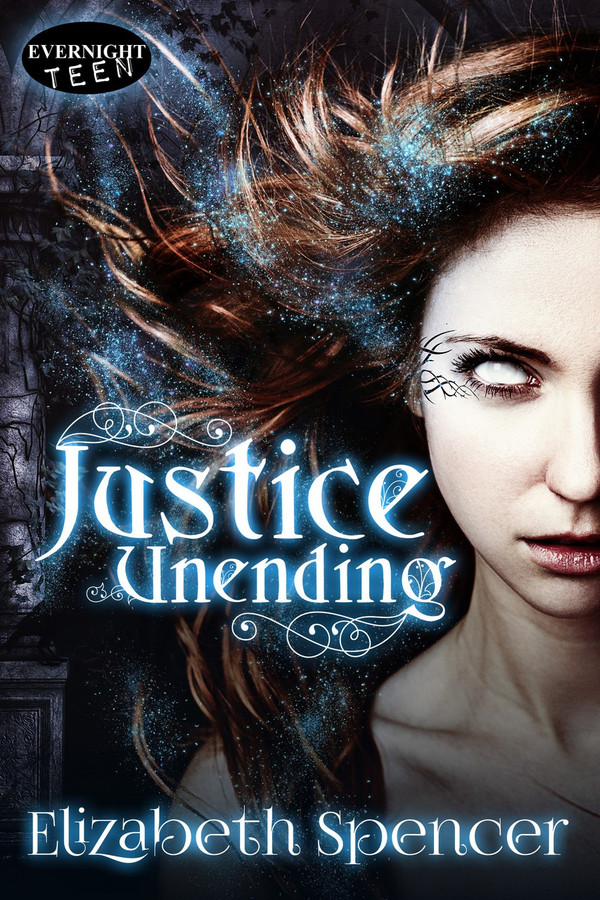 Within the walls of the Bastion, it's an honor to become a host for an Unending—the bodiless, immortal spirits who rule the country.

But for Faye, it meant her sister would have to die.

When Faye sneaks into the Mother Duchess's manor, she just wanted to see her sister one last time. Instead, Faye finds a manor in chaos, a murdered man, and an Unending assassin named Aris who needs a new body—Faye’s body—to bring the Bastion to its knees.

Now Faye's harboring the Bastion's most wanted criminal. And if she wants to live, she'll have to escape the Duchess and her immortals, all while keeping Aris from harming anyone else.

There's just one problem—Aris is not the villain. And now Faye is the only one who can help her stop the Duchess before anyone else—and especially Faye—has to die for the Unendings' whims.

Trays rattled. A half dozen women gasped. Justine was on her knees and forearms, her head inches away from the tiles. Her fingers clawed at the grout.

It happened so quickly Faye was left standing with her hand in the air. She dropped to her knees and put an arm gently on her sister’s back, her voice shaking so hard she had to force herself not to yell, “Why didn’t you say you felt this bad?”

“I—” Justine croaked. She clenched her eyelids shut, clamped her arms against her chest, and bent over herself, folding her body into a tight ball of pain.

The maids crushed around them. Olivia crowded up behind Faye, sounding worried. “We’ll have to carry her to her room. Two or three of us can do it. Faye, tell your father—”

Faye watched Justine’s back rise and fall with every unsteady breath. “Oh. Oh. Me? You want me.”

Justine didn’t answer. Slowly, unsteadily, she pushed herself up to her knees. She was still shaking as she pulled her arms away from the curve of her stomach, lifted them, and showed their backs to her sister.

Thin black sigils ran all the way down her arms, spiraling and looping from her knuckles to her elbows. They looked like stylized flames.

Those were the sigils of an Unending.

Faye stiffened. The maids sucked in a collective gasp of surprise. Only Olivia managed to croak, “Whose are they?”

Justine stared at her own hands like they belonged to someone else and cocked her head to the side, as if listening to a voice only she could hear. “Belisama.” She paused a moment, dreamlike. “The Mother’s guard? I would imagine that she’d choose someone big, someone strong, someone who can…” She fluttered her eyes weakly, and it sent tears sliding down her cheeks. “I am admirably responsible? Duty? Is that enough?”

Faye wished Justine would stop talking. Her sister did not ramble. Her sister was proper and well spoken, and this … this was terribly, desperately wrong. Faye stared at the sigils as her stomach shuddered like a pot in rolling boil.

Justine pulled herself away from Faye as she rose to her feet. Olivia offered her a shoulder, and Justine leaned against it before she tried to speak again. “We need to send a message to the Mother Duchess. I’ll have to go there, talk with her, be Fixed.” Her eyes widened, as if she only then realized what she was saying. “I have to tell Mother and Father. I have to get my things in order. I have to make sure the maids know what to do. I…”

No one said anything, even as Justine trailed off into silence. The maids looked at her achingly. Olivia shot Faye a concerned glance, then gently took Justine by the arm. “Come, miss. Let’s tell your parents the news.”

Faye tried to breathe and choked on a sob. No one seemed to notice. The maids stepped around her, their skirts rustling against the tiles as they followed into the hall, leaving the half-finished dinner still bubbling and popping on the stoves.

Faye couldn’t move. She was trembling, she realized, trembling so hard her fingers were numb. Her brain looped wildly, madly, hysterically through a pair of awful, unbearable thoughts.

Her sister had been chosen by an Unending. Her sister was going to die.

Faye just wanted to say goodbye. The Unending rule Faye’s world, but she never imagined that her sister would be claimed by one. Everything happens quickly and Justine is whisked away before Faye’s had a chance to properly say goodbye. Sneaking into the manor brings her face to face with Aris, the mad immortal. Is Aris really the villain, or is something sinister going on in the Mother Duchess’ manor? Will Faye discover the truth or is she simply a pawn in an ancient feud? Faye is a very likable character. She’s very willful and stubborn, which isn’t always convenient for those around her, but I count this as her greatest strength. She has a strong sense of right and wrong, and her determination to stand up for what she believes is impressive. I do wish that Faye had been more willing to listen to Aris. They were sharing the same body, but Faye seemed determined to close herself off from Aris as much as possible. I think they could have avoided a lot of trouble had Faye been willing to listen. On the other hand, I also believe that the journey Faye and Aris take helped form their bond and understanding of each other. The glimpses into Aris’ past were particularly interesting, and I believe that as Faye learns more about Aris, they will be a great team. The secondary characters definitely have potential, but haven’t been developed fully. At this point, they are mostly a background to Faye and Aris and I never felt that I got to know any of them well. The villains are also interesting, but I would like to know more about them and their motivations as well. The Mother Duchess in particular has piqued my curiosity. She seems to have had good intentions at one time, but her own wants and needs have blinded her to the horror of the society she has created. I thoroughly enjoyed Justice Unending. The main characters are realistic, their story is compelling, and the pacing is excellent. I sincerely hope that Ms. Spencer has plans for a sequel because I would love to learn more about Faye, Aris, and the Unending.

Enjoyed reading this unique and well-written novel. Based on other fantasy novels, it rates right up there with Terry Brooks. The "unending" was a new twist on a exciting story line. There is so much more to explore in this world. Anxiously awaiting the sequel!

At approximately page 127, I began to hope there would be (soon or late) another book to continue exploring the Bastion.The author delivers on character and pacing, and the adventure of tumbling from one ingenious riot to another is a pleasure. I learned a new word as well ("Ploof"). The world Faye et al inhabit balances well between familiar and fantasy. I especially enjoyed the unusual trope on possession by immortals, and how well the author used it in developing both story and character. She guides and satisfies the reader.

Justice Unending creates a rich fantasy world in which immortal spirits may choose to inhabit human bodies through a process called Fixing. The human dies and the immortal being (Unending)incarnates into the chosen body. Faye's sister Justine is chosen to become the new incarnation of Belisama. Wanting to say good-bye to her sister before she is Fixed, Faye ventures to the manor of the Mother Duchess, mother figure of the Unending and ruler over the humans who live in her walled kingdom, Bastion. However, the plan goes awry when the non-incarnated spirit of a rogue Unending enters Faye. They flee across Bastion in hopes of escaping the Mother Duchess and her army of Unending, receiving help from unlikely allies. The rogue Unending, Aris, reveals the shady underbelly of the founding of Bastion and the sacrifices that the Mother Duchess has been willing to make in order to perpetuate a system that allows the Unending to harvest humans and reincarnate as needed. This book is a thrilling ride through a world that feels part medieval fantasy and part steampunk sci-fi, with a dash of romantic tension and an open ending that has me hoping for a book 2. A great, quick read, but also thought-provoking content about power systems and the ways we protect them.

How I Dumped My Demon by Elizabeth M. Darcy

The Light by Peri Elizabeth Scott