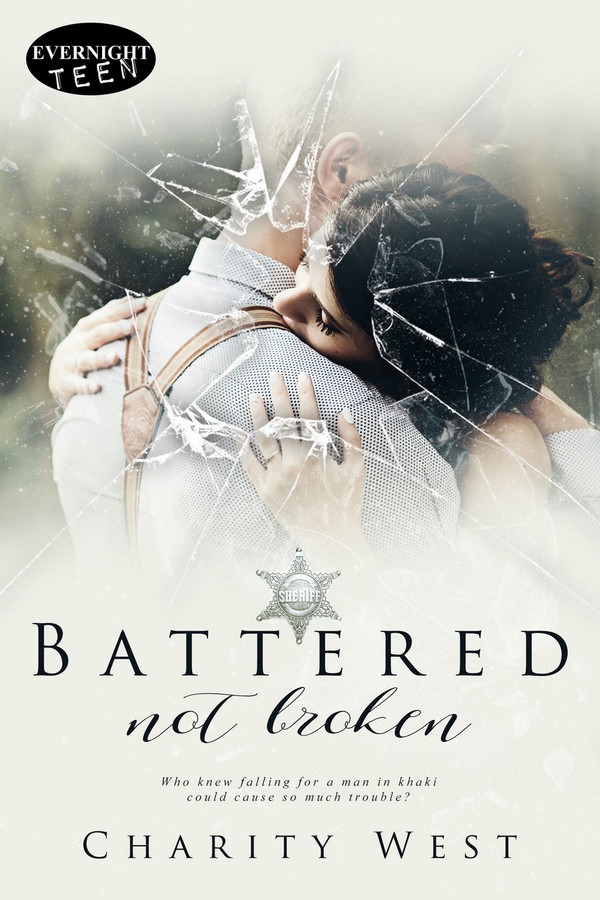 Battered and bruised, Wren has taken a lot from her father over the years, but when he throws her out of the house, she sees it as a blessing in disguise. She has no job, no home, and never finished high school, but what’s all that compared to a life without abuse? When she starts over in a new town, under a new identity, she makes it her goal to fly under the radar.

New town, new life. Only, there’s a corrupt deputy intent on stealing Deputy Gray Frampton’s family fortune, a slight case of aggravated identity fraud, and a night in the local jail. It’s enough to make any girl’s head spin. Wren Michaels has to find a way not to spend the next three years in jail, warn Gray that Deputy Pritchard is after him, and somehow hold onto the happily-ever-after that is finally within her grasp—assuming Gray wants a felon as his girlfriend. Who knew falling for a man in khaki could cause so much trouble?

The shadows crept closer as a deep cold settled into my bones. I cowered on the floor of my closet, hidden behind shoes and clothes, as I listened to the slap of flesh against flesh. He’d come home drunk again, even more so than usual, and he’d barely cleared the door before landing the first blow. It was cowardly of me to hide. I should stand up and fight—do something to make him stop. My phone was still clutched in my hand, and my heart pounded in my chest, the thump-thump loud in my ears. I knew I should call 9-1-1 and get help for Mom, but I also knew that even if they arrested him, they’d never keep him. Mom would give the cops some bullshit excuse as to why he was beating her, or say she fell, and then she’d refuse to press charges. If I thought things were bad now, they’d be even worse if he went to jail for the night. We’d lived through that horror once already, and once was more than enough. No one had to tell me my dad was an abusive asshole who thrived on being a bully. I’d experienced it firsthand.

My palms grew slick as I heard my mother’s whimpers and then booted steps coming down the hall. Was I going to be next? The footsteps grew louder, and I heard my bedroom door slam into the wall. I bit my lip to stifle my cry, hoping he wouldn’t find me. He shuffled around my room, his boots clomping and scraping the wood floor as he searched for me. When the closet doors were flung open, I squeezed myself as far into the corner as I could, but I knew it wouldn’t be enough.

An iron grip closed around my arm, his fingers biting into my skin, as he jerked me out of the closet. I stumbled and fell to my knees at his feet, bracing myself for what would happen next. My head was wrenched back, tears stinging in my eyes as he fisted my hair. There was such hatred in his gaze, such contempt, as if he couldn’t even stand to look at me. I’d always done everything he’d ever asked, and still it wasn’t enough. As far as my dad was concerned, I’d ruined his life, and he was going to make me pay for it until I was able to leave this place behind.

“Thought you could hide from me?” he slurred. “Stupid little bitch.”

The slap across my cheek made tears spill down my face, but I ground my teeth together so I wouldn’t make a sound. When he knew he was causing me pain, he seemed to enjoy it more, and I wouldn’t give him the satisfaction. He pulled hard until I was standing upright, my hair still clutched in his fist, and then he punched me in the stomach. I folded at the waist, gasping for breath as stars danced in my vision and bile rose in my throat.

“Worthless. That’s what you are.” He kicked out and knocked me to my knees again. “You should be groveling, thanking me for your life. If it weren’t for me, you wouldn’t even be here, you ungrateful shit.”

Yes, because thanking him for the abuse he heaped on me day after day, thanking him for all the hurtful names I’d been called, thanking him for the days I’d had to skip school because I couldn’t hide the bruises—that was exactly what I wanted to do. One day, he would get what was coming to him. I didn’t know how or who would do it, but I knew someday he’d piss off the wrong person and they’d beat his ass until he cried like a baby. And I hoped like hell I was there to see it. I’d kick back with some popcorn and enjoy the show. I hated him. Hated him.

“You think I don’t see the way you look at me?” he demanded. “Well, I’m tired of it. I’m finished with you. My life was better before your mother got knocked up. Ever since she popped you out, you’ve been nothing but a financial drain. Not anymore. You have five minutes to pack your shit and get the fuck out of my house. And if I ever see you again, I’ll make you wish you were never born.”

Like I didn’t already wish that every day of my life. I should thank him for offering me freedom, even if I had nowhere to go. Anything was better than staying here. Plenty of people lived on the streets, so there wasn’t any reason I couldn’t do it, too. It just meant I’d have to find a way to get my GED sooner rather than later. Dropping out of high school hadn’t been the best decision in the world, but when Dad had broken my arm, Mom had thought it would be better than facing questions we couldn’t answer.

He stomped out of the room, and I heard his bedroom door slam. After grabbing a bag out of my closet, I shoved several outfits, underthings, and socks into it. I snatched my toothbrush and hairbrush out of the bathroom and crammed them in there, too. As an afterthought, I grabbed the travel pouch from under the sink that had shampoo, soap, and a razor tucked inside. I didn’t know where I would go to shower, or where I was going to sleep tonight, but I would figure it out. Maybe Mom would let me come home to bathe while Dad was at work a few times a week. Plus, it would give me a chance to check on her.

I zipped up my bag and then grabbed my backpack and purse off the bed. With my keys clutched tight, I walked out of the only home I’d ever known. Mom didn’t say a word as I passed her, and she didn’t try to stop me. Maybe she figured I was better off living anywhere but at home, and she may have been right.

This is the story of Wren. A young woman who has suffered many years of abuse at the hands of her father until the day that he kicks her out of the house. From there on we witness the strength and perseverance of this young girl. I found the storyline to be passionately written and the character of Wren is an inspiration. The author’s writing style quickly pulled me in and I had an extremely hard time putting this book down. My only issue with this book is the cover and if I hadn’t read the synopsis I would have thought this was a historical story. {I received an eARC via the publisher. I made no guarantee of a favorable review and the opinions expressed here are unbiased and my own.}

As a teen, Wren is kicked out of her home by an abusive father. She is on her own with little money, few clothes, no job and nowhere to live ...but she is happy to be away from the abuse. With a new identity and in a new town, she finds a job but her nasty, no-nonsense boss fires her when she is late for work one day - even though she called to say she'd be late. Could things get worse? Will they get better? Will Wren find a new job, happiness, the new life she desires, or maybe even love? One thing at a time and that means a new job first and foremost. Just as in real life, things will get worse before they get better.

The Boyfriend Deal by Charity West

Upon Broken Wings by E.L. Reedy and A.M. Wade