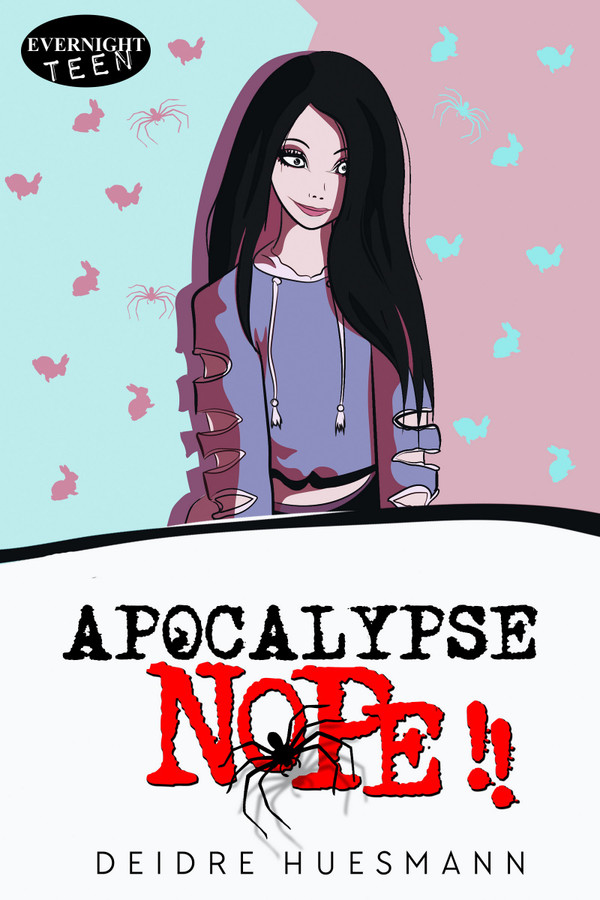 Creepy. Grudge Girl. Bigfoot. Also known as Ivy-Jean, a tall, gloomy teenager whose only friends are wild spiders. One day she commits a federal crime by opening her neighbor’s mail and summons War, one of the Four Horsepeople. Suddenly it’s her job to bring about the apocalypse.

In fact, she has no choice. End humanity, or the one person who cares about her will be sent to hell. To protect her mother, Ivy-Jean agrees to give the apocalypse her best shot. But plans unravel at horrifying speed when Pestilence usurps the high school debate team, War infiltrates the D&D club, Famine aspires to become a world-famous chef, and Death finds love for life in an unlikely place. If Ivy-Jean doesn’t correct their course, she’ll lose the horsepeople to the forces of good forever.

Ivy-Jean looked up and found the tip of the sword at her nose.

“Stop dawdling. Call the others.” War spoke calmly and plainly, though his expression warned it would be unwise to argue.

“Now.” Amber eyes flashed. The air crackled like the sky before lightning struck. “Before I poke a hole in your gloomy face.”

Accurate, she thought with little emotion. “Go ahead.”

Ivy-Jean’s voice flattened. “If I’m dead then I won’t have to go back to school tomorrow. Or worry about homework. Or how Mom’s going to kill me when she sees that door.”

“Thanks for the hole in the floor. She’s going to string me up by my toes for that, too,” she said.

Intrigue lit his gaze. “Is that still an acceptable torture method?”

Quashing the strange stirring his fascination with such a morbid image evoked, Ivy-Jean said, “You want to kill me? Fine. High school’s already the most effective torture known to man, and everyone’s a bully. Even I’m susceptible to internalized misogyny, so we’re just doomed to hell.”

“The misogyny or the doom?”

He rapped the sword against the tiles, spiderwebbing more cracks. “Do I look like a woman-hater to you?”

The sword lowered. Then, with a splitting boom, War stabbed another hole into the floor.

“Listen, Gabriel.” An odd smile played on his lips. “I think we’ve had a bit of a misunderstanding.”

His misunderstanding was getting old. “I’m not Gabriel.”

“Sorry. Gabrielle. You’re clearly presenting as a woman this time around.”

“I don’t judge. Since when did you care so much about gender or what’s between your legs?”

“I’m not the one worried about it!”

He acted like she hadn’t spoken. “Look, the world sucks, right?”

“People are the worst.” His voice sweetened, cajoling the bumblebees of her soul with words of nectar. “Everything’s gone to hell. Politics, murder, suicides, bullies, homework, zoos, plastic bottles”—he gestured grandly with each point—“it’s all cruel and senseless. And nobody wants to fix anything. It’s the same mistakes over and over again.”

This was also true.

“So, wouldn’t you agree the only way to make the world right is to blow it up and start over from scratch?”

Ivy-Jean hesitated. It sounded good in theory, but there were a few obvious issues with that. “Mom doesn’t suck.”

“And that’s the beauty of the apocalypse,” he said. “The good are saved and the rest are obliterated.”

Apocalypse … he had said something about the four horsemen, hadn’t he? It sounded like a subject she’d fallen down the rabbit hole in the internet before. Something about four violent cismen—because of course they were—riding horses and bringing about the end of the world. War, Death, Famine, and one other whose name didn’t quite jive with the rest.

Either way, it was difficult to keep doubting the ethereal nature of his existence every time she looked at the door half-buried into the wall.

“Only the evil will suffer.” War’s amber eyes took on a solemn quality that juxtaposed his arrogant flamboyance. “And as you’re the angel who summoned us—or will be, once the rest are here…” He trailed off, eyeing her meaningfully.

Ivy-Jean didn’t quite get it. “Angel?”

“Those are the rules. ‘Ye, for the watchful angel shall pass judgment upon those it has lived amongst.’”

She considered his words for a moment. “Sounds like a load of crap.”

“You will be a literal load of crap if you don’t summon the others. Pistachios?”

“Do you mean capiche?”

War slammed the sword into the floor a third time, startling her and poor Spinderella. “Just summon the others already!”

Okay, he wasn’t the most convincing entity, but his weapon sure was.

Apocalypse NOPE!!! by Deidre Huesmann is a fantastic and entertaining young adult story that has me hooked from page one. I have read other hooks by this author but I think this one might just be my favourite. I really really enjoyed reading about Ivy-Jean. She is such a relatable character and you really can’t help but fall in love with her. And what an adventure she goes on. The author has created a unique and well written story that really will appeal to most ages. It is fun but also interesting, with a great story and some brilliant characters. I cannot recommend this book highly enough!

I enjoyed this young adult paranormal story. This is not my first book by this author but it is one of my favorites by her yet. This is a well written story that took me on an apocalypse adventure like no other. The characters are relatable and brought the story to life on each page I read. This is a fast paced story that will take you on an adventure of having the choice of bringing an apocalypse or saving a mother. Ivy-Jean is a tall, awkward teenager who is left with no choice to either end humanity or save her mother all because she opened someone else&#039;s mail. What happens next, I highly recommend reading to find out. This is a truly a great story that will take you on a nonstop adventure.

This book is not my first book by this author but it has become one of my favorites. Deidre Huesmann does an amazing job with this familiar story with her own twists. Her character building is clever. This is about Ivy-Jean and her apocalypse dilemma. She is an awkward teenager, who opens a piece of mail that was sent to her neighbor. That is when all hell breaks through literally. She has started the four horsemen of the apocalypse on their tasks. If she does not help bring the world to an end, they will kill her mother. What would you do to save your mother? Will the four horsemen be sent on their mission or will they have a different agenda? I highly recommend reading this story to see what our awkward teenager chooses to do.

Apocalypse NOPE!! is a teen urban fantasy by Deidre Huesmann about, you guessed it, the end of the world. Awkward teenager Ivy-Jean accidentally sets in motion the series of events that will lead to the apocalypse and now has to figure out what to do about that, on top of all the problems she already had. This is a fun read, with enjoyable characters. Pestilence, War, Famine and Death undercover at a high school is a great concept, well executed. I think my favourite of the four is War, whose speech is littered with malapropisms and whose response to pretty much every problem is to find someone (or something) to smite! There’s plenty of LGBT+ representation which is varied and sensitively approached. Apocalypse NOPE!! will appeal to fans of high school paranormal/supernatural stories, such as Buffy the Vampire Slayer and Twilight. And you can’t ignore the parallels with Good Omens (there’s even a nod to it in the text, when the Horsepeople explain why they aren’t Horsepersons) so if you love Good Omens and want a different approach to a similar scenario, this is definitely worth a read! This book gets five stars from me! This isn’t the first of Huesmann’s books I’ve enjoyed – I was enthralled by the Modern Greek Myth series – and reading this reminds me that I must get round to trying more of her excellent books!

Okay so this book is amazing. There is angst, teen drama, fantasy and even cuss words. This book set my brain on fire. I am in love with the characters and storyline. I could not put it down. This author is one to put on your reading list for sure. This is one of those books that makes you become animated as you read. It shows you&#039;re hurt and you can&#039;t help root for the end of the world

This was a wonderful read and would be perfect for anyone who enjoys light humor and YA categories. All of the chapters were written well. Ivy-Jean is extremely relatable, pessimistic, views herself as an outcast, and is downright odd. Once she opened that piece of mail, her life changed forever. The Four Horsepeople are undeniably, for me, the best characters in this book. I found it easy to place them in the positions that they were given. They were thrown into a human high school and seemed to fit in rather perfectly, all things considered. I assumed that there was a bigger shock coming with the clues that were given in the text, but it did not come. It could, however, leave room for a part two that shows us more about how Ivy-Jean came to be. If that&#039;s the case, sign me up!

Apocalypse Nope!! by Deidre Huesmann a five-star ride of a read. This wasn’t what I was expecting, but to be honest I didn’t know what to expect, but this made me smile so much, Ivy-Jean is relatable, I understood why she doubted herself and haven’t we all felt like that as a teenager. But it’s the four Horsepeople that really bring the story to life, they add something special to the story. This is creative, original, well written and just an overall great read.

This book has got to be one of the strangest, yet entertaining books I’ve read in quite some time. There are definitely some parts where you’ll have to suspend belief, but it all works for this book. I enjoyed this author’s interpretation of the Four. War and Death are my favorite! The solution Ivy has to put forth to remedy the situation is… unique. The one thing I will say is that if you don’t like transparent social commentary in your books, you may not enjoy this one. Overall, fun and entertaining read!

This is a Young Adult novel and is 296 pages. This story follows Ivy. Ivy views herself as really not fitting in anywhere. I mean, when your BFF’s are spiders, it kind of throws people off a bit. One day, she opens her neighbors mail and unbeknownst to her she ends up summoning the four horsemen and next thing you know she is faced with either creating an apocalypse or saving her mother. So, she decides to go the apocalypse route. I really enjoyed reading this book. I think we have all felt like Ivy at some point in our teenage years.