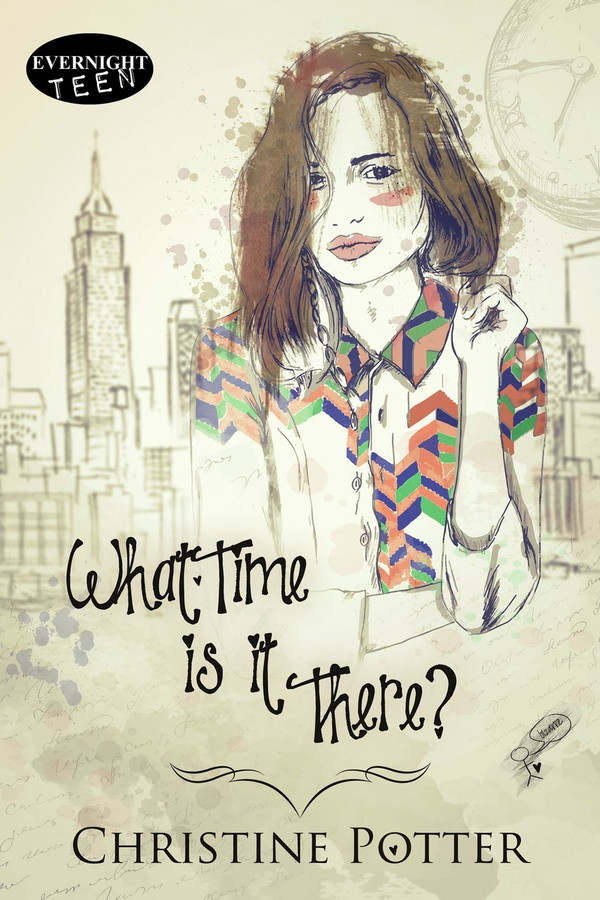 Just over a year ago, Bean and Zak headed for colleges two thousand miles apart, promising to write, but to see other people … until Bean fell for the wrong guy and Zak fell off the planet.

Now, Bean’s got two weeks’ worth of Zak’s year-old letters that she still can’t bear to open—and a broken heart. Her new best friend, a guy named Amp, wants her to read the letters and be done with it, but he may have his own reasons for that.

When Sam shows up at Bean’s school unexpectedly and Bean tumbles into the 19th century from the cellar of a ruined church, things start making a bizarre kind of sense. That is, if she can just fit all the pieces together again…

“I couldn’t make myself go back to my room,” Bean said. “I—um—Traveled again.”

Amp’s greenish blue eyes met hers. He gave her a sad smile—and Bean surrendered to what she’d been trying to hold in all night.

“Ah, Bean…” Amp sat helplessly on the incredibly gorgeous crazy quilt his mother had made for him when he left Salt Lake City. It had a lot of purple and black in it, and it was full of special scraps of fabric: a bit of a tie Amp’s grandpa had owned, even a swatch of his mom’s wedding dress. Bean sobbed, and didn’t know whether or not she wanted Amp to hug her. Sometimes he did when she got like this, and it wasn’t too awkward. He wasn’t her boyfriend. He wasn’t.

Okay, so she had slept in his room a few times when she was too sad and tired to go back to her dorm. He had a ridiculous pair of pajamas that looked like they should belong to a cartoon character from the 1920’s. They’d been a birthday present from one of his Utah aunties, and he so was small and skinny that they fit Bean pretty well. She’d curled up beside him as if he were an underweight teddy bear. But all they ever did was sleep. He snored a little. It was always weird the next day—just a bit.

Neither of them said anything for a few minutes. Bean sobbed. Finally, she wiped her eyes.

“I don’t want it to be all the way over.” Bean struggled to get her voice under control. “I’m sorry. I’m a mess,” she said.

“Then call Zak’s mother and find out where he is. I can’t believe that not one person in Stormkill knows how to get hold of him. He can’t have just fallen off the planet. You’d have heard if something terrible had happened.”

“I don’t even know if that’s true. Suzanne gets the gossip, ’cause she’s still home, day-hopping to the City, but she mainly knew Zak through me. Sam’s super-involved in her life downtown. She never really hung out with Stormkill kids anyway—Deerwood Academy, you know. I can’t call his mom. She probably hates me!”

On the surface Bean seems like an ordinary college girl, but she has a secret. She can travel in time. During her first year in college new events and people make Bean forget the love of her life and now she regrets it. Unfortunately Zak has now disappeared, although she sees him when she travels. I found this story fascinating. What at first seems to be a straightforward tale of time travel turns out to be far more sinister. I love the way Bean’s friends play a major part in the story, those from her past and the present. From day to day events, to Thanksgiving and Christmas I followed Bean and her friends as they tried to work out where they were going with their lives. Bean has the added problem of where is Zak? A good story, a little slow at first, but intriguing and fast paced once it gets going.

Sweet, evocative love story set in a real and detailed recent past. Layered & textured sights, aromas, songs gently carry this delightful gem forward. Can time traveler tales be . . . cozy? This one is! So enjoyed the journey through time and through Bean's growing up to be her own woman.

Sweet, evocative love story set in a real and detailed recent past. Layered & textured sights, aromas, songs gently carry this delightful gem forward. Can time traveler tales be . . . cozy? This one is! So enjoyed the journey through time and through Bean's growing up to be her own woman.

Incredibly, they just keep getting better each time. I love following the time traveling adventures of Bean, Zak,, Amp, Julia and all the gang.

1972. Bodichon College. The scratching of a needle on vinyl. The crackling voice resolves from static. The radio is on. The show begins. Reader—you’re home again. Brace yourself, Bean fans. We’re headed back to the Age of Aquarius. Get ready to re-immerse yourself in Christine Potter’s tapestry of past reality we recall so well from TIME RUNS AWAY WITH HER and IN HER OWN TIME. There’s the music, the politics, the fading innocence of characters mirrored in a society undergoing the same change, the often quiet warmth of settings established by an author who lives in her world while she writes it. BUT … there’s the 19th century, too, the wreck of old buildings, past lives, secrets buried in time. All is not safe for Rebecca “Bean” Donahue—nor is it for many of the characters we’ve come to know and welcome into our Kindle like friendly seasonal ghosts. Bean and Zak have separated—bizarre—and our hero has aged somewhat, testing dangerous waters with often questionable choices and relationships: like with this character Josh, whom the reader immediately recognizes as an insufferable ego-driven doofus from the time we meet him, even as it takes Bean a little while to get there. Zak and Sam and Suzanne aren’t immediately present in this story. We miss them right away. We’re worried and frustrated—and you know what? That’s just how good Christine Potter is, how invested we are with her world … and before you get too upset and inadvertently heave gak into the sink, don’t worry too much. The author ultimately delivers on everything we, the readers, want—in her own time. (See what I did there?) What’s in the letters, Bean? Bean, you’re killing me. Listen to Amp. Come to your senses … (Sorry. I’m just remembering my first experience with this book. I’m having flashbacks. Potter does this to me, you understand.) The plot darkens and expands in WHAT TIME IS IT THERE? Apart from the forward momentum of this story, which introduces some pretty terrifying supernatural elements (again, no spoilers) and takes us to some pretty uncertain precipices that are simply rife with cracking and crumbling suspense, there’s also a bit of a backstory being filled in. It’s very gradual, peeling away in layers to keep us guessing, interspersed with rich and loving and fun character interaction—until the fit hits the shan again, so to speak. Time travel! Tarot reading! Ancient musical compositions! Mausoleum battles! Popcorn! Pizza! And all the singing and music and groovi-ness—a storm of nostalgia and story—that we’ve come to expect from this wondrous series. Something old, something new—the continuation of a tale that grows in imaginativeness with each installment. Christine Potter has done it again. Find out WHAT TIME IS IT THERE, reader. You’ll be so glad you did.

Before I started reading What Time Is It There?, I wondered whether I would find it easy to get into the story in this third book of Christine Potter’s “Bean Books” series. I needn’t have worried at all. Potter is a skillful storyteller, and she knows how grab readers new and old. The back story of Bean, the novel’s college-age female protagonist, is recapped just enough, in a gradual unfolding that keeps us turning pages (or rather, in my case, tapping my e-reader). The plot device of time travel, while it’s a standard element of a certain kind of genre fiction, also works excellently well at creating surprise and keeping the scene fresh; just when the ’70s details might start to pall, we’re pleasantly startled with a shift to the grandeur of the late 19th century. The element of demon-haunting, which we come to understand gradually—the way we’d work out the crime in an Agatha Christie novel--is the spice of threat that keeps everything moving, and the religious combat against it is a comforting resolution. I confess that young Bean and her gang of college friends have a special pull on me, for whom the experience of college in the ’70s was lived reality. The careful descriptions of those clothes, the allusions to the politics of the time, and the names of all those bands and songs spun on the college radio station by Bean and her fellow DJs occasionally drew me out of that plot and back into my own. But good storytelling pulled me back in quickly. So even though the book is designed to appeal to young adult readers, and even though YA fiction is very different from what I usually read, this non-young adult found the book appealing in a great many ways.

The After Times by Christine Potter