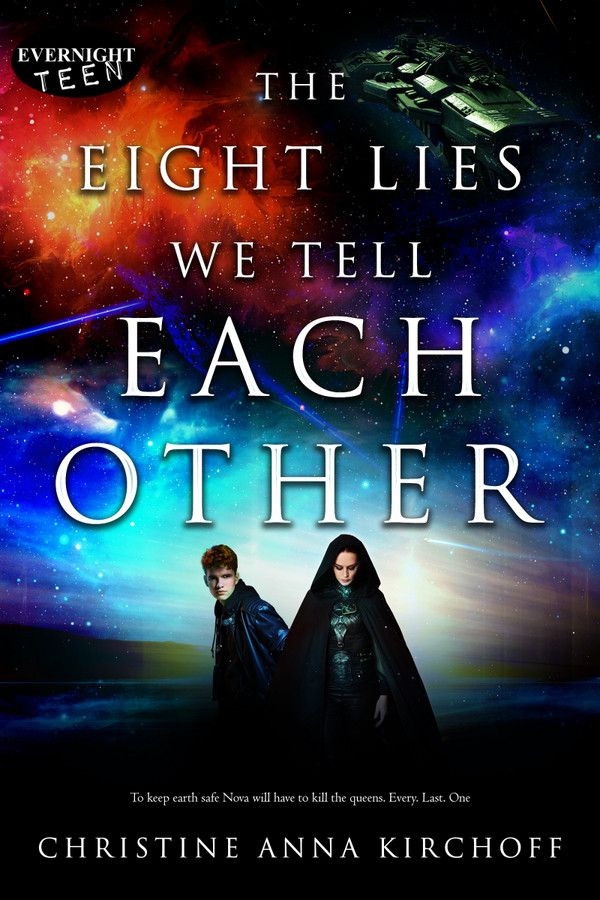 Lie one: we’re all going to survive.

Nova just wanted to do her duty like everyone else. Become a soldier, keep Earth safe. When her base is attacked, she’s captured by the alien enemies but they’re nothing like she was taught. They’re smart, calculating, curious, and so her nightmare begins.

When she’s finally rescued, she can’t remember much of her humanity but she can’t tell anyone what she knows, like their language or the experiments. She never expects to meet the boy with the stunning green eyes, Pierce. They bring out feelings in her she had to destroy to survive. Then it comes out that the aliens are looking for something. Someone.

To keep Earth safe, Nova will have to kill the queens. Every. Last. One.

14+ due to adult situations, violence

“You okay?” Pierce had stayed.

“All good.” Nova curled her hands into fists. It was just a pain killer. One foot in front of the other.

“You should stay here,” the nurse yelled.

Nova kept walking. She didn’t stumble at all as she made her way down the hall and outside. Everything looked different. The quad was filled with soldiers instead of students. The ship still puffed smoke, but it was white instead of a thick black. She eased her body left and forward. She could do this. No problem, but she didn’t want to be this vulnerable at her dorm. “Where do I go?” Had she said that aloud?

“I’m not taking you back to your dorm.”

Taking her? Nova snorted, only then realizing his hand was on her back. Again. He steered her to the left toward the senior dorms. “No.” She paused or rather stumbled to a stop.

She knew that! Nova pulled away and turned around.

“Nova, will you stop being so fecking independent for one fecking day!” His deep voice boomed in the quiet evening air.

“Don’t need anyone.” She was fine by herself. The pain killer was already wearing off. She felt fine and she knew where she was going.

Wall? Nova hit the archway with her shoulder and frowned. “Ah, wall. I saw that.” Keep going. You’re fine. Maybe she’d be able to sleep with all this stuff floating through her body.

“Where are you going?”

Was he still following her? “Up.”

“You keep touching me and I…” Hells! She almost said she liked it. “I will break … things.” Okay. That was pathetic.

Did they pass her dorm? “My place.” She pointed backward awkwardly. She was going to beat that nurse. This was crazy. How much did she get? She couldn’t … nothing … dritt.

Oh. “Oh.” Why would that be bad? Nova shrugged. Gianna was nice. Her legs were feeling heavy and hard to lift, but her side didn’t hurt. Nothing hurt. They made their way to Gianna’s and Pierce opened the door. Nova felt like it had taken years. A few more steps and she could crash. Her daggers! She couldn’t sleep without her weapons. “Hells.”

She practically fell into Pierce, then jerked back and banged against a wall. “Can’t sleep. Need my blades.”

He took her arm and tugged, but she refused to move. “You want to go through a bunch of soldiers to get weapons that you weren’t even supposed to have?”

Nova rolled her eyes and poked him in his bare chest. “Defense. Offense.” That explained it? “Need my blades.”

Pierce shifted and lifted Nova into his arms.

She let out a gasp that was girly and embarrassing. “Put me down or … pain you.”

“Because that made sense.” Pierce carried her to the couch. He laid her down … or tried to.

Nova wiggled to get free, sending them both crashing into the couch. “Blades before sleep,” she mumbled. No. No, she had to get up despite how warm his skin was under her chilled hands. She wrapped her arms around him a little tighter. He smelled good too. Nova inhaled deeply and moaned.

Pierce brushed hair from her face. “I’ll keep you safe.”

Nova snorted, fighting but losing the urge to snuggle against him. “Not safe. Never safe.”

Pierce leaned closer and whispered in her ear. “If anyone tries to hurt you, I’ll tear them apart.”

This story was completely captivating! Full of action and emotion, light-hearted moments and sweet teen love. I did not want it to end. Very well done!

I read books every day...I like this genre but haven't found a satisfying read in a while...Then, this book came along! I can't believe there aren't more people reviewing this -- It's fantastic! Action, character driven, LOL funny, full of heart and great, believable romance! Nova is everything I like in a character -- teen who learns to survive on her own, full of spunk, and action galore. I really wish a movie could be made of this...Kudos to this writer for making me happy for a day! Bring on the good stories Christine! You've got a fan in me!

I don't normally do this but I'm going to just paste the blurb here. This is what initial made me want to read the book and I really can't explain it any better than: Nova just wanted to do her duty like everyone else. Become a soldier, keep earth safe. When her base is attacked, she’s captured by the alien enemies but they’re nothing like she was taught. They’re smart, calculating, curious and so her nightmare begins. When she’s finally rescued, she can’t remember much of her humanity but she can’t tell anyone what she knows, like their language or the experiments. She never expects to meet the boy with the stunning green eyes, Pierce. They bring out feelings in her she had to destroy to survive. Then it comes out that the aliens are looking for something. Someone. To keep earth safe Nova will have to kill the queens. Every. Last. One. Alright. Now my babbling about how good this book is has to somehow resemble a review. Let's start with Nova. Oh. My. God. Nova! That poor girl! She is a normal teen when the book begins and it's amazing how each chapter shows her evolving. Or rather devolving. She's now angry, violent and a perfect weapon. When she returns to the humans, she has a hard time fitting in until she meets Giana and her handsome brother, Pierce. That is such a great romance! The push and pull between them is so entertaining. I love Pierce! His personality is so sweet and patience. He's trying to get through Nova's mental armor and eventually he does which leads to the beautiful romance. The action is intense. Tons of fight scenes that really kept me on the edge of my seat. I think the craziest are the scenes in the beginning where she's experimented on and then trying to survive. INSANE! I want to wrap my arms around her and hug. There is also one scene that totally had me in tears! Each of the eight lies is explained and I really thought that was a nice touch. That ending is so freaking good. I didn't want this book to end! I can see why this book is getting so many good reviews. I loved it! You should totally be reading The Eight Lies We Tell Each Other right now!

I loved it. It was action packed, had a pretty unique story and crushed me at the end. I am telling you i don't cry a ton in books but this got me hard. Though I did love the ending it had. The characters were a huge part of this story and I really enjoyed most of them, there was one I didn't love how he ended up. I just didn't want this book to end but I couldn't put it down. I needed to know how the story moved along. Check out the book i think you will also love it

Damn, I was not expecting that! Tons of action, angst, fantastic characters, twists and a really well developed world. This is a must read for me!

Completely captivating! This story kept me reading far into the night. Full of action and emotion, light-hearted moments and sweet teen love. I did not want it to end. Very well done.

Truth and Other Lies by Foxglove Lee

If We Were Heroes by Christine Anna Kirchoff