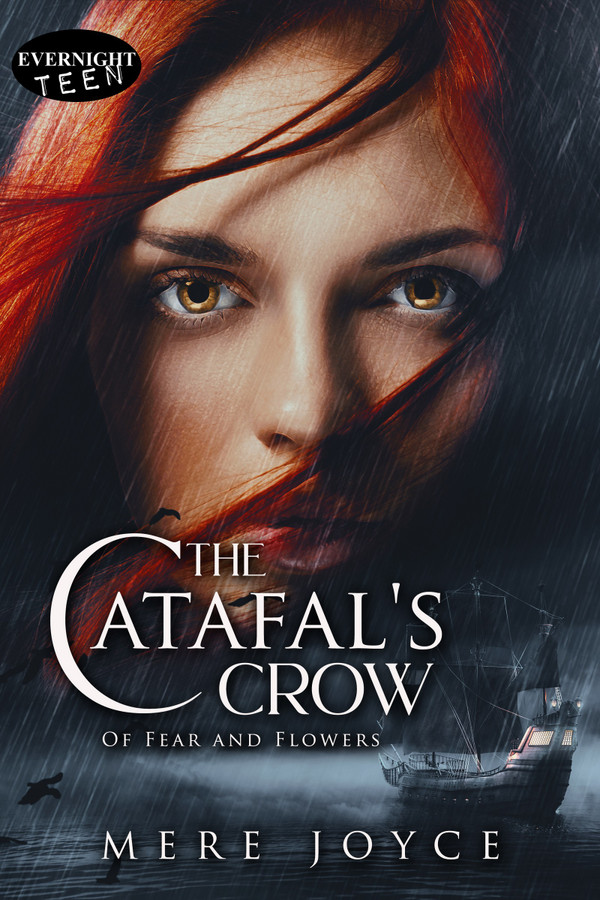 Of Fear and Flowers, 1

Leira Auberon has always been ridiculed for her lack of fear and the blood-colored birthmark that covers much of her face. After being blamed for a village death, Leira’s only chance of escape is to join the crew of the catafal—the ship that collects the Kingdom of Agrestis’s dead. Most people fear the catafal and what it stands for. But Leira has never felt fear, and she is intrigued by the ship’s menacing captain.

Leira soon learns to love life at sea. But when a group of immortality-seekers attack the catafal, its misfit crew are drawn into a rebellion threatening the kingdom’s peace. Leira is ready and willing to defend her home aboard the ship. But when her reality is twisted in surprising ways, she finds herself facing the one thing she never expected.

14+ due to adult situations, sexuality

“Three, that all?” one of the voices said. A female voice. Deep and smoky, her eastern dialect languid and laughing. “Hardly seems worth the stop. Should have waited until the next round.”

“And keep the bodies here?” The first voice who had spoken was a local. The carpenter, probably. Or one of his apprentices. “Are you mad?”

“The Briostal works for a long time,” the woman said. Leira glanced at the barrels of preserving solution, a liquid mix that all the shrouds were soaked in before they were placed around a corpse. “Wouldn’t make much difference if they were here for six months or sixteen. They’d stay fresh as the day they were wrapped.”

The villager’s voice raised nearly a full octave in its indignation. “You speak as if these are pieces of meat to keep for hungry days,” he said. Leira imagined him scowling. She rolled her eyes at his outlandish anger. “Instead of souls trapped in bodies, awaiting release at the Ascypt.”

The woman sighed. “They’re facing eternity.” She sounded bored of the explanation, and Leira wondered how many times she’d given it before. “I doubt it much matters if they have to stay here a little while longer before facing it.”

Leira smiled. The villager muttered something under his breath, and then three pairs of feet shuffled further into the room.

“Not that it matters, anyway,” the woman said. She sighed again. “Wildfye’s in the midst of a fever spread. Gave us fifteen. Suppose it all works out. Come on, let’s get these loaded up and on the ship. The captain’s awaiting his payment. You don’t want to anger the Hedgehog, do you?”

“No,” the villager agreed. His annoyance curtailed into wary acceptance. “We don’t want that.”

The three started loading the corpses, and Leira used the cover of their noise to leave the death-house. The conversation she’d overheard had rekindled her excitement, and she ignored the chill of the still rainy eve as she ran to the boardwalk.

Ivor’s Bay was not a tiny village, but it was small enough to house only one inn and a single dock for any vessel larger than a fishing skiff. The lone dock was where the merchant ships pulled in to sell wares, or where the officer ships from the capital town of Dortmunia’s Peak came to deliver royal decrees. Leira had already attempted to sweet-talk, buy, and even fight her way onto these ships. Dortmunia’s Peak was her goal—the biggest town in all of Agrestis, the one place she might halfway blend into the crowd and make herself a quiet, meager living free of the ridicules she’d suffered her whole life at home.

No one had been willing to take Leira as passenger, neither by ship nor carriage nor even a rickety ass’s cart. Locals disliked her, and foreigners were put off by the stain on her face—or their suspicions of why a young girl was so desperate to travel alone. The catafal was her last chance. If she couldn’t book passage on a ship as feared as The Rooster, the only way she’d ever get out of Ivor’s Bay would be to set off on foot.

Leira wiggled her bare toes, desperately hoping it wouldn’t come to that.

The boardwalk was lively with the catafal in port. Shipmen hoisted supplies, and crew members disembarked from the main deck to spend a few hours on solid land. The night was dark, but in the glow of torchlight the black wood and black sails of the ship loomed like shadows. Most of the local villagers stayed away from the dock when The Rooster was in sight. The only ones not foolishly fearful enough to face the ship were the hardened fisher folk who dealt with the catafal every time it pulled into port.

Leira stared at the magnificent sight of Death’s ship, hoping the Bride would prove unprejudiced by giving her blessing to a girl with a stained face.

Of course, it wasn’t Death Leira needed to convince. The Rooster had its own captain.

A fantasy pirate story? Yessssssss! Leira is on the run from her village and her only chance is to join the crew of the Catafal. The captain intrigues her but as time passes it’s not just him she becomes attached to. The ship has become a home she’s never had. Add in a rebellion, immortal seekers and a twist no one saw coming. I am so excited to read this book! I love the idea of fantasy pirates and this book did not disappoint! Leira is different from the rest of the village and so they see her as a threat. When she’s forced to flee, she decides to take chance and join the Catafal. I really liked Leira! She was just such a great character. She’s pushed into a corner and when she fights back it’s with such gusto as well as heart. In fact, I liked all the characters on the ship. They each have their own depth and history. There’s even a little bit of romance that balanced the world building and action. The world building was great and the action was edge of your seat good! This is the first book I’ve read by Mere Joyce and I can’t wait to read more.

I received an advance review copy for free, and I am leaving this review voluntarily. What a fun surprise this was. If I can center in on just one element that MADE this story —atmosphere. So much atmosphere. I genuinely felt I was in every location, feeling the sea wind and hearing the chatter. Immersive and a wonderful feeling. The characters are a fun bunch. Took me a bit to get them straight but the main ones definitely stand out. I just felt drawn to all of them and pulled myself a bit thin sometimes. At times, the plot feel a little thin for me but the characters and the world are so damn engaging that I didn’t care. Definitely worth a read.

My favorite setting for a book is at sea, so I knew I had to read this book! It was more of a 3 star read for the most part of the book for me, until the last 1/4 of the book and everything seem to just change and become enjoyable. We follow Leira who has a rather prominent birthmark on her face that causes people in her town to shun her, and her own family to either hide her, or be ashamed of her. She decides to take her life into her own hands and join the catafal, a ship who travels from town to town picking up their dead to deliver them to a sacred place called the Ascypt. Leira joins this crew and realizes she loves life at sea and this crew who do not look at her like she’s a monster, but instead as part of their crew. She learns a lot about the catafal and it’s purpose, learns about the interesting captain, and has adventure along the way due to a group of people who are seeking immortality and think they need to start by bringing down the catafal and it’s crew and captain. It was definitely slow paced at first, and I don’t mind that. We get to learn a lot about the catafal, the crew and Leira, and what they do. We basically learn everything as we go like we just joined the crew with Leira. I primarily had a huge issue with Leira. I admire her tenacity and gumption, especially since she’s had to deal with being ridiculed her whole life, so she’s had to learn to stand up for herself, but also put a brave face on all the time, to the point she fears nothing. My issue with her is that for her age, and after everything she’s had to deal with, she seemed rather immature. She seemed to smile at everything, even when I felt it was inappropriate. She seemed to focus on what she thought was right, rather than listen and understand from others what is actually correct or right. I dunno, I guess I just didn’t really like her

3.75, rounded up to 4. I had been searching for an ARC to read for awhile, and this one popped up and I just felt draw to it. The cover was just engrossing enough to pull me in with Leira&#039;s mysterious face and beating red hair. I am a firm believer that sometimes WHEN you choose to read a book is very pertinent to if you end up enjoying it. This novel was everything I wanted to gobble up right now. The world building was very good considering the length was not very long. I could feel every single vibe of each port. The side characters had just enough description to keep their likeness fresh in my mind, but not bombard me or side track me from the main story. I enjoyed seeing how Leira and Kob play off each others perceived &quot;weakness&#039;s&quot; so differently, and even more so that Leira was a strong female lead. She had moments that screamed Aria Stark, and I didn&#039;t hate it at all. Even some of the scenery poked at GOT lands, and again, I did take it all in and relish it it.

The Cavial's Charge by Mere Joyce