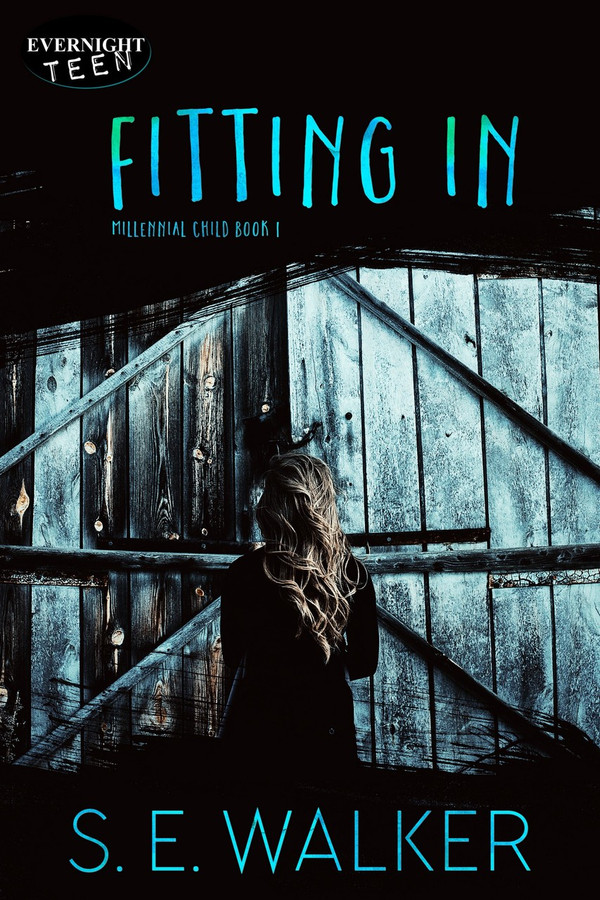 Charlotte Finnegan James desperately wants to fit in. Her parents encourage her to act like everyone around her, but Charlotte always feels like an outsider looking in. When men come late one night to “take control” of her, Charlotte knows fitting in will forever be impossible.

After being placed into a military boarding school, a name change is the first step in taking control of her own life. Finn’s differences are evident, no matter how hard she works to appear normal. Finding a sympathetic soul in Taber McCoy helps Finn execute her plan to escape the school.

Can she continue to hide her true self from the world? Will she find sanctuary with her aunt? Can she and Taber stay ahead of the men in black following them on their race across the country?

I pressed my lips together to keep from laughing as a slew of movie references flashed through my head. I loved the original movie and couldn’t help but wonder if they were here to recruit Dad into their ranks. Since he was nearing retirement and only forty-three, he would need something to do with his future, but I was not sure I wanted him to become a ghost-person like Will Smith and Tommy Lee Jones had been.

Or maybe they were from some other super-secret agency the government financed but never talked about in polite society. Would he end up like Mom, disappearing for weeks or months at a time, only to appear one morning at breakfast and act like he had not been gone? I was not sure I could handle both parents being absentee, at least not yet. It was bad enough the Army deployed Dad to the other side of the world every couple of years.

“She needs training, guidance,” the agent on the left said. His tone was both placating and implacable at the same time. Was he trying to convince Dad to their way of thinking? Or simply informing him of how things were going to be? “She is too powerful to be running around loose. We need to know what she is, and what she is capable of.”

Dad took another deep breath, releasing it slowly. He then frowned. He seemed to be thinking over whatever the men had told him before I had arrived. Turning to face them squarely, he planted his feet shoulder width apart and set his hands on his hips. The military man was in full control now, even if he was wearing his pajamas.

“How do you know how powerful she is? She has not mentioned to me anything strange happening, and I have not noticed anything that would make me think you have any reason to recruit her.”

The men on the couch shifted as if uncomfortable. Or guilty.

Once they stilled, and without looking at his partner, the man on the right said, “Schools routinely administer a series of tests at the end of ninth grade to follow up on testing taken in third and sixth grade. These tests help parents and administrators see where the child’s interests and aptitudes lie. They also help the students decide if they should be looking at college, a trade school, or alternative program of study to make the most of their innate talents.”

“Charlotte never mentioned taking any tests,” Dad said, relaxing his stance a degree or two. “But this still does not explain why you came here in the middle of the night, demanding I turn my fifteen-year-old daughter over to you.”

“Your daughter’s test results raised red flags, not only within our agency, but in a number of government agencies, and probably all around the world. Others will come for her and they will not ring the doorbell to ask for your permission. They will take her by force, if necessary. We will keep her safe while training her to work to the benefit of the country and the world,” the agent on the right said. He was just a ray of sunshine.

Halfway through his speech, Dad began to slowly shake his head left and right. “No. I will not have my daughter put in one of your so-called training programs. She is too smart to become one of your mindless drones who cannot think for themselves beyond whatever bullshit propaganda you feed them. Her interests lie in other directions. And as for protecting her, I will keep her safe.”

“And the next time you are deployed? What do you plan to do then? Put her with your family? Leave her here to run wild? She is at an age where she needs guidance, structure, and a firm hand to help her learn control. She does not even understand how powerful she will be. When she figures out what she can do, and I assure you she will, she could go in either direction. Try to imagine the trouble she could get into if she is not properly monitored, guided, and controlled.”

I leaned closer to hear better. My movement caused Dad’s gaze to shift. My stomach dropped into my butt when our eyes met and locked. He said nothing, but the slight tilt of his head to the left, and deepening of his frown, told me I had better get myself back to my bed and stay there before he decided to let these men take me away.

Before I could react to the silent order, the two men on the couch turned, looking over their shoulders to see what had taken Dad’s attention off of them. I mouthed the words, “Don’t see me,” and studied their faces.

The agent on the right was older, mid-forties, maybe, and heavier, uglier, and meaner looking than the one on the left.  Since they did not jump up and grab me or demand I come into the living room and join the conversation, I glanced back to Dad. He was still frowning and looking straight at me.

Knowing I was in trouble, I slowly straightened and shifted to my right until I could no longer see him, which meant he could not see me either. Once out of his sight, I stopped and continued to listen.

“You do not need to worry about my plans for my daughter,” Dad said. “She will not be going with you, or anyone like you, tonight or any other night in the near future. She is an American citizen and will not be dragged away and conscripted into whatever woo-woo faction you are building.”

Being special has its perks, but it definitely isn’t always an easy life. The mystery of Finn’s true identity made it impossible for me to stop reading this tale. She knew so little about it at first that I couldn’t begin to guess what secrets were hidden in her past. I really appreciated the fact that this part of the plot was hidden so completely. It made it even more fun than it would have been otherwise to slowly gather more clues and try to figure out who or what Finn was. There were a few mild pacing issues in the beginning. The introduction to Finn’s world took up more time than I was expecting. While it was nice to get to know everyone so well, this did leave less time for plot development later on than I would have liked to see. With that being said, this didn’t stop me from enjoying this book in general. Taber and Finn were both intelligent and courageous teenagers. I especially liked the fact that they spent so much time thinking about things that could possibly be a roadblock to their plans and trying to come up with solutions to them in advance. This is exactly the kind of behavior I love to see in characters in these kinds of stories. The final scene gave me the impression that there may be a sequel on the way. If this is true, I can’t wait to find out what Finn and Taber will do next and if they will continue to be so level-headed in the face of danger. Fitting In kept me perched on the edge of my seat. I’d recommend it to anyone who has any interest at all in the culture of military schools

Charlotte tried her hardest to fit in. Her parents were always encouraging her to fit in at school - don't stand out from the crowd. It seems like no matter how hard she tried, things didn't go according to plan. After some scary men show up at their house wanting to take Charlotte away, her father takes her to a military school. Charlotte becomes Finn and meets Taber. They end up going on an adventure to find out who and what Finn really is. I enjoyed this book a lot! I was sad to see it end and can't wait for the next installment in the series. I loved the relationship between Finn and Taber. I also really enjoyed being with Finn as she starts to learn about herself. I'm keeping my fingers crossed that the next installment will be out soon!

Breaking Out by S.E. Walker