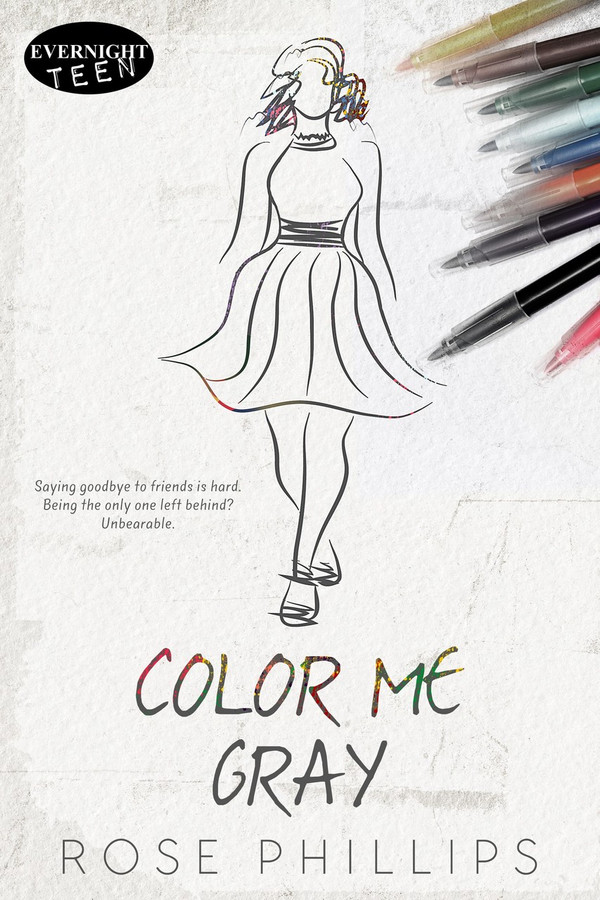 Saying goodbye to friends is hard. Being the only one left behind? Unbearable.

Mags is sure she will suffocate on loneliness when her friends head off to college. They get new adventures while she gets to live in the same house, on the same street, in the same city she’s been in forever.

When the hottest guy at a party hits on her, she’s convinced her world has shifted, that between fashion school and the start of a relationship, she too will have a chance at a new life.

Everything changes that night.

Just not in the way she dreamed.

I hop off the bus a couple of blocks from Pam’s place, glad I have the walk to settle my nerves, at least a little bit. I’d spent the whole ride playing what if. What if I’m the youngest person there and they treat me like a kid? What if I’m overdressed? Underdressed? What if there’s a hot-looking guy there? What if he talks to me? What if no one talks to me?

My palms are sweaty and I wipe them on my dress before knocking on the door. Music blares and laughter flows out an open window, so I know people are in there, but no one answers the door. I try the doorbell. Nothing.

“Most everyone’s out back.”

My heart leaps, and I jump and pivot at the same time doing a full about-face like a ballerina, except there’s nothing graceful about my landing.

“The party,” he says as if he hasn’t just scared the bejesus out of me, “out back.” He thrusts his thumb over his shoulder like I need a visual aid to understand. Then he squints, his brow furrowing. “You are looking for Pam’s bash, right?”

“Yeah.” What a brilliant grown-up response. If I could kick myself, I would. I count to five, the magic number to form a sane response according to Lizzy, and try again. “Pam in the backyard or the house?” To my ears, that sounded nonchalant but I’m not entirely sure. I can’t think straight. My heart has gone from playing leapfrog to pounding against my rib cage. The guy has the most amazing blue eyes I’ve ever seen. They even sparkle in the light.

“Not sure. Probably out back.” He steps toward me and thrusts out his hand. “Todd.”

I quickly swipe my hand across my dress, then reach out. “Mags.”

His clasp is firm and warm and I want it to go on, but I’m afraid he’ll notice how damp my hand is, so I pull it away.

“I need to grab a case. If you wanna wait a sec, I’ll walk back with you.”

He goes to Craig’s van, disappearing from sight when he opens the back door. I take advantage of the moment to push back the hair that matted to my forehead during the walk. I wish I could have tied it back but it isn’t long enough for that yet. Well, it is, but barely, and it looks like a man bun.

Todd slams the door with one hand, while balancing a case of beer on his hip with the other. He grins, dimples creasing his cheeks. I might faint, he’s that cute.

I trail him to the backyard, trying not to notice how nice his backside looks in those jeans or how muscled his arm looks carrying the beer. It’s hard not to though, and a tingle of anticipation grows along with the volume of music.

He unhooks the large wooden gate and holds it open. “After you.”

There it is, that twinkle again. Mother Mary, but he’s hot.

“Mags!” Pam sails over, beer in hand, looking like she’s never had a baby. She’s wearing tight jean shorts and an even tighter tank top. The only thing big about her is her chest and that’s because she’s still breast-feeding Little Jo. She says it’s good for the baby. “You can throw those in the cooler.”

Todd salutes and heads over to the tables set up near the house.

“Glad you came. Love your dress. Did you make it?”

Pam’s having a good time, all hyped and excited. It’s nice to see. She’s a good mom and takes it seriously, but I figure it’s good sometimes to make a point of being “pre-mom you” again with no baby in sight.

“Ma helped.” I rock my hips so she can see how the material swishes.

“Half,” she says over her shoulder, tugging me toward a brassy blonde whose clothes make Pam’s look loose in comparison. Maybe it’s because she shouldn’t be wearing the same kind of clothes as Pam. She looks all stuffed into hers. I try never to do that now. I make sure everything flows over my body instead of wearing clothes like plastic wrap the way I used to do.

“Mags is … was…” A cloud passes over Pam’s happy face before she brightens. Heartbreakingly over-brightens. “Mags was Jo’s best friend.”

If Linda notices the slip in Pam’s cheery presence, she doesn’t say anything. “Nice to meet you.”

“Be back in a minute.” Pam skips off to greet a group of people coming through the gate.

I watch her for a moment, smiling and chattering away, her laughter louder than the music. She’s such a positive person. I don’t know how she tucks all of her sadness away. I’m sure having the baby helps distract her. It’s pretty tough to be depressed around Little Jo. Still, they were close sisters and it hasn’t even been a year since Jo died. It has to be exhausting always being so up and energetic. I turn to say as much to Linda but she has moved on to a group of women on the patio.

I recognize two people from the christening but that’s all. Todd is pushing the now empty case under the table. I’ve never met any of Craig’s family. I think most of them live on the other side of the country. Maybe Todd lives nearby. Although, he wasn’t at the christening. I’d remember him if he had been. Especially his butt, which is all I can see of him right now.

He turns around, catching me staring at him. Heat rushes to my cheeks as if he’s heard my thoughts. He raises a beer and his eyebrows, and it takes me a second to realize he’s asking if I want one too. I don’t know. I’ve never had one. But why not? I’m going off to college in a few days, aren’t I? Many kids far younger than me drink. I mean, I’m eighteen. Adult enough. Besides, he’s yummy. Exceptionally yummy. If it means I get to talk with him again, it’s worth trying. I say yes, and my stomach does flip-flops as he grabs another one out of the cooler and strides toward me.

This was an amazing book. It was present and relevant and I connected with the characters.