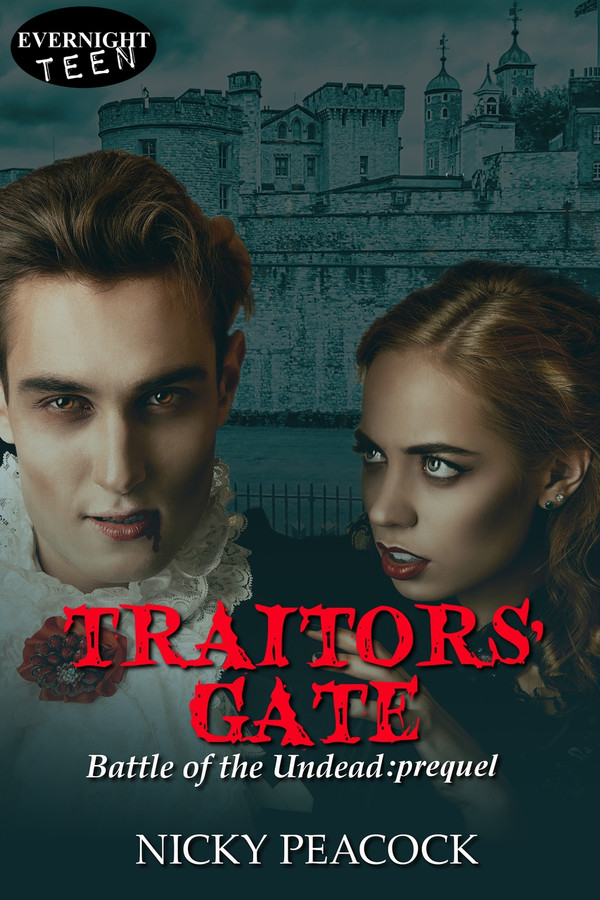 Battle of the Undead: prequel

Only time will tell who the traitors really are…

Sixteen-year-old Lucinda is getting the home-coming from hell. England is in the grip of the War of the Roses and her tyrant father has promised her hand to a vile man three times her age. In need of aid, she seeks sanctuary with an old childhood friend only to find him accused of treachery and harboring a supernatural secret. All too soon Lucinda is caught in a fight that’s not her own but, to be with the man she loves, she’ll gladly take up arms.

When you stand at Traitors’ Gate, keep the vampires close, and the zombies as far away as possible!

I rush into the dining room like the wind on a stormy night, gaining a withering look from Mistress. Black who is seated at the table along with my father and a strange man.

“And this is Lucinda,” my father says pointing at me. The man next to him gets up and smiles at me. He bows slightly and takes my hand in a sweaty grip. He drags his moist lips over my palm in what I assume is a romantic gesture. I look over at father, who doesn’t seem to care.

“This is Lord Appleby. He has a large estate in Dorset.”

“Dorset? My, that’s quite some way away.” I try to smile at him, but fail miserably.

“Yes, you’ll love it there.” Lord Appleby sits back down to the right of my father and Ms. Black physically moves me to the seat across from him.

Lord Appleby is painfully thin with almost black eyes and a complexion liked a cooked frog. I imagine him putting his arms around me, and I shiver; it would be like being enclosed by a sallow fleshy girdle. The dinner slowly marches through seven courses, every one of my favorites from Mistress. Leighton’s repertoire, but each plate is tainted by the obvious conclusion to my homecoming: my father has sold me and didn’t even have the decency to tell me beforehand. I’m to become Lady Lucinda Appleby, the sixteen year old wife to a forty year old man who eats with his mouth open and, as he’d gotten drunker through the evening, and has become more and more leery, regardless of Mistress Black or my father’s presence.

The moment I finish chewing the last piece of the cheese and bread I stand up.

“I’m tired from my journey, so I will bid you goodnight, father, Lord Appleby, Ms. Black.” I nod to each of them and turn to leave.

“Wait,” my father says, “Lord Appleby would like a turn around the garden with you.”

I glance toward the window. It must be at least ten o’clock and is pitch black outside.

My father narrows his eyes at me.

“Oh please, yes. I so love a garden at night.” Lord Appleby jumps to his feet and moves to my side. He’s protecting me. Have I misjudged him? I take his arm and we head into the garden.

Outside, the chill of the night air pinches at my bare arms. I look at Lord Appleby in his lovely warm cloak, but he makes no move to offer it to me in any kind of gentlemanly gesture.

“And these are the white roses,” I say. “My father planted them for my mother.” I linger at the small patch of buds that I remembered as being much bigger, fuller, and more fragrant.

“Ah yes, we are all white roses here,” he says with an exaggerated wink. He’s referring to the House of York. A war has been raging for quite some time between the white rose of York and the red rose of Lancaster, each backing a different king for the throne of England.

We make strained small talk for a while longer as we walk farther away from the lights of the house. Suddenly he stops and grabs my elbow, spinning me round so my body is flush against his.

“I do hope you are amenable to this arrangement, Lucinda,” he says.

I try to pull back, but he’s stronger than he looks and holds me firm. “Please let me go.”

I look up into his eyes and see a slight madness there, a malevolence that I hadn’t noticed before.

“Just a kiss,” he whispers and lowers his lips to mine.

I pull my head back so that he lands his kiss on my chest. I’m unsure as to whether that is worse than his mouth on mine. His grip on me tightens and he begins to slobber rough kisses over my collarbone, while his hand frantically pulls up my petticoats ripping into them as he does. I scream, but no one comes. I struggle and pull back as far as I can from him, falling halfway out his grasp. A wild look crosses his face and he raises up a hand and slaps my cheek. The blow makes me stagger backward, out of his clutches. He stares at me for a moment. I kick him in the crotch. He doubles over with a strained groan. I run.

This is a great intro into how Britannia and Nicholas came about. If you've read Bad Blood you know get more insight into how these two have so much feelings for one another . A great short story!

Keeper of the Gate by Paula Kennedy

Lost in Wonderland by Nicky Peacock

The Assassin of Oz by Nicky Peacock