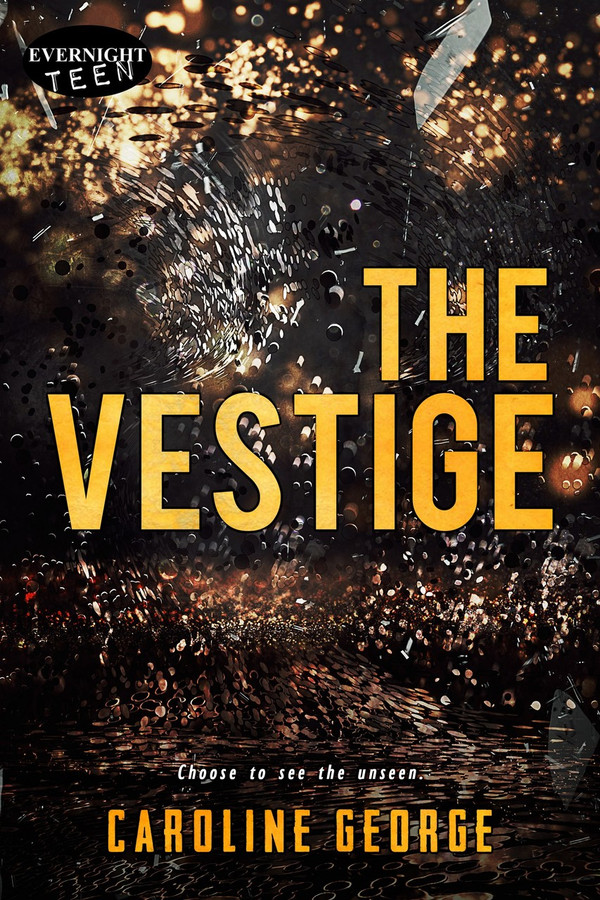 Choose to see the unseen...

Julie Stryker has spent her life in the scenic streets of Charleston, South Carolina, bicycling to the local college, working at a coffeehouse, watching her family fall apart and back together. She has plans, dreams—all of which seem out of reach. Then she meets a handsome stranger at work, and she believes her life is on the brink of a much needed change. But after a tragic accident, Julie is whisked away from the only home she’s ever known and confronted with a life-altering secret: The end of the world has already occurred and a portion of humankind has been kept oblivious.

Tossed into a hidden world of deception, Julie must confront the truth within herself and reveal the government’s layers before the end of the world becomes a permanent reality.

Rain drips from my nose, treats me as a stone caught in a rushing river. I crouch in the mud with limbs like chiseled rock and bandaged, blistered hands. The wind saturates my clothes—if I don’t stop shivering, I might crack teeth, have a seizure, or lose all feeling in my feet. Do I still have toes?

“Your lips are blue.” Jack drapes his jacket over my shoulders to protect me from the cold. Water spews from his mouth and nostrils, streams down his skin. “Ready for takeoff?”

“Yeah, it’s ready.” Nash and Charlie rise from the ground, plastered from head to toe with grass shards and dirt. “We have a functioning drone.”

“Shouldn’t we wait for the storm to die down?” I shield my eyes from the torrential downpour. Fog creeps through the trailer park, thicker than smoke. Its ashy tendrils claw at the remote-controlled aircraft. Chunk of plastic and wires. Determiner of our fate.

“Rainstorms are terrific cloaking devices, and since the drone won’t be going to a high altitude, the clouds will not hinder our imaging system. We’ll have a clear view,” Nash shouts over the patter. He pumps a weather balloon with hydrogen and activates the drone’s navigation system. “The weather balloon along with a thick coat of paint will prevent a heat signature. We should be off-grid.”

Jack stares at the overcast sky with his jaw clenched. He must sense it, too—danger lurking around us like a predator, the stench of change. “Let’s head inside.”

We squeeze through masses of people to reach the Command Center’s main room. Why has everyone come to witness the big reveal? We’re screwed whether we live or die.

“Move.” I fight through the sea of dirty bodies and emerge at the front of the crowd where General Ford, Ezra, and their crew of logistic officers stand at attention. Someone activates the drone’s flight sequence. Static shifts across the monitors before clarifying to reveal aerial footage.

Jack grabs my hand. He’s trembling. “Are you afraid?”

For all the strong, compassionate parts of him, there are also scared, broken parts, and until this moment, I’ve been so focused on the layers I love, I’ve overlooked the layers that make him human.

“Please. Make me afraid because feeling fear would mean I wasn’t numb.”

The footage shifts focus, replacing dilapidated trailers with acres of forest, tumultuous whitewater rivers and mountains blanketed in mist. Learning the truth won’t destroy Earth in a blink, so why should I worry? I’ve experienced the worst-case scenario, lost all that mattered to me. The apocalypse can’t take or return what’s been stolen. It won’t leave me any more scarred and changed than I am now.

Silence plagues the crowd like a virus, spreading fast. Some of the Listers appear to be holding their breath. If the drone doesn’t pick up speed, I might have a bunch of unconscious people to resuscitate. Jack—he squeezes so tight, my knuckles pop. Why are they freaked? How could life in a world beyond the dome be any better than life inside the bubble?

Reality flickers onto the computer monitors.

There lie the remains of America: skeletal ruins, necrotic residue. The surviving evidence of humankind is all that’s left. And it’s not enough.

If you're looking for something different to read pick this book up. It's nothing like any other book I've read or started to read.

I received this book from the author for the purpose of this review. All comments and opinions are entirely my own. “Choose to see the unseen…” Thrown into adventure from the beginning and attention gripped through the rest of the book, The Vestige combines real life with fiction in a way that won’t be easily forgotten. Romance that’s clean and real, action that is graphic but not gory, and clean of any profanity, this novel is a “go-to” for teens and young adults alike. The plot line is clean in its transitions and there are enough twists and surprises to keep the reader hooked along the way. I give it 5 out of 5 stars and look forward to reading more of Caroline’s books in the future!

It took a while for me to get into the story but once I did, I was hooked. Caroline's writing style is wonderful and the characters are very well developed. I would highly suggest this book, it was full of fun, unexpected twists that I loved made me want to keep reading.

The Vestige is raw, gritty, and gripping. Author Caroline George draws you into the story from the first sentence and keeps you riveted to the end. With her amazing grasp of the English language and her sophisticated understanding of the human heart, she weaves together a simple romance in the midst of a complex world. Sharon W.

The Vestige is a gripping story. Caroline George's writing is beautiful. She paints a vivid picture with her words. Her characters are multi-faceted, complex individuals that continue to unravel and develop throughout the story. The violence is a little shocking at times, but it makes the story feel even more real. Julie and Jack's love story is sweet and vibrant: a bright spot of hope in a hopeless world. A definite read for lovers of dystopian novels or action and adventure with a splash of romance thrown in. I loved it.

Life hasn't been easy for Julie Stryker... Yet she continues to live as the days bring healing and a new normal to her. She dreams of the future, and what life could be like while she works at a small coffeehouse. Even though he dreams of the future, she doesn't pay close attention to the details of life day to day. When she meets a handsome guy at the coffee house one day, her eyes slowly open to the strangeness of her small town in South Carolina. Maybe life isn't as normal as she thought. After a horrible accident - or rather what she thinks is an accident- she finds out that the end of the world has already happened... and the surviving humans are completely unaware. Everything she knows to be real changes in a blink as she finds a new purpose. Personal Likes I mostly appreciated the uniqueness of this story - it's clearly science fiction. Yet there is a level to that could fit into the horror genre I mentioned earlier as the end of the world isn't pretty at all here. Caroline George has a fresh take on the YA sci-fi genre that could grab a ton of readers. Then there is the real family of the Strykers - they were dealt some tough hits. Julie's mom and dad acted like actual people and crumbled - yet time moved forward, and healing comes with time whether we want it to or not. And in this George did an excellent job. Another plus, there are a ton of different kinds of characters. Sure there are typical stereotypes, yet there is a more complex nature to each character which allows for the story to bloom in a way many YA sci-fi books never do. The Vestige by Caroline George a book review on Reading List Personal Dislikes Let me first say this is just not my kind of story... I don't like to think of some of the possibilities that are brought up in this piece of fiction because I don't like to be scared by books. The news takes care of that just fine on its own. So there's that. And because I was a little leery of the genre once I figured out the details... I started to see too many flaws in keeping the pace up. In order to allow for the quick pace of the book, recoveries were rushed, especially mentally. Another issue with the need to keep up the pace were some plot holes... when the main character is acting on an idea that every character in the story knows about the reader is clueless... well that doesn't read well to me. Again this is a genre thing - which is why I would say this book reaches into the horror category at least a bit... Reading List Rating So I'm giving this book a three heart rating because my issues with it were because this isn't my kind of genre or story - not really. I wanted to love it because I'm a huge fan of George now... and she did an excellent job at setting up the story and making the world & characters come to life... but in the end, it just wasn't my kind of story. Me and zombies or aliens or any of the like tend not to go too well. My Suggested Audience This book is categorized as a teen book - and I would agree. The character is a teen girl living her life like most American teenagers... dreaming of the future while holding down a part-time job and thinking about the next steps for school. I would probably say since the topic is a bit gruesome this could be for older teens - maybe 16+. There are possible triggers for those who have lost a family member to a serious illness, and connections to the military that might be a little rough. And then there is the whole end of the world, alien invasion, zombie apocalypse side that can be a little gruesome... As far as romance... there is a love story, it's not as prominent in the need to be warned against especially if the audience is 16+. As far as this book for adult audiences, it's clearly a YA book - but if this is the kind of story that you enjoy, you will probably find it a fun read. It is certainly a change of pace from most books out for YA right now.