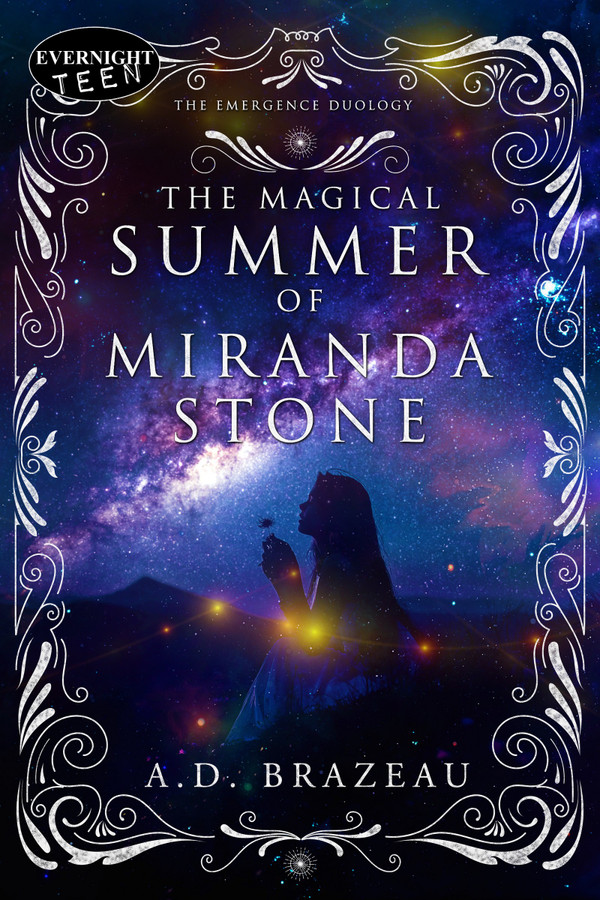 A teenage runaway, New Orleans, 90s alt ballads, and emerging magical powers—this summer is shaping up to be anything but normal.

16-year-old Miranda Stone wants to be a typical teenager, but when she, and women around the globe, develop magical powers, typical flies right out the window.

Miranda, feeling like danger could be lurking, runs away to New Orleans. New friendships and a job singing as the opener for a drag show, reveal to her how fun life can be. When her friends begin to develop their own powers, and the world erupts, staying off the authorities’ radar becomes more difficult. An unforeseen romance with a young woman compounds the complications. Bittersweet, real, and humorous, this novel is an exploration of love, found family, and how the world might react to supernaturally powerful women.

16+ due to sexuality and adult situations

When Neeta raised her right hand, her left still clutched around the stem of her martini glass, the light came. It came bright and fierce. From her left hand, the blue curled around the clear stem of the glass like flame licking its way around a log in a bonfire. At the same time, energy pulsed from her right hand with such force that it blew out the florescent light directly over our heads. The second the light blew, the martini glass shattered in a brilliant explosion of luminescence and deadly shard.

There were screams as Ash slid under the table. She tried pulling me down with her, but I sat still as a statue, Billie’s claw-like nails tearing into my thigh. I didn’t even move her hand, just covered it with my own. The pain kept me grounded in the moment.

The three bikers stood on the other end of the bar, behind the pool table, eyes wide and hairy mouths slack. They stared right at Neeta.

Everyone was still for a beat. Then the biker who complained about the music, still staring at Neeta, reached out a hand, pulling on the leather sleeve of his friend. “She’s one of those witches.”

Until that moment, I’d felt as if I was in some sort of mental fog, the kind you feel after a traumatic brain injury, the kind that messes with your mental processing. But when the man uttered that word, my right hand shot out, across Billie, grabbing Neeta’s still glowing hand now bleeding from the broken glass. My fingers slipped through hers, blood making it hard to grip her flesh.

Neeta stared at the men, fire behind her gaze.

Ash cowered under the table at my feet as Billie never once released her unrelenting grip on my leg.

“We have to go. Now,” I hissed through clenched teeth. “Neeta.” I tried shaking her, to make her look at me, to break the spell.

It was then I heard Joey laugh. While I was focused on everyone else, he had moved from behind the bar and was inches from our table. “Witches. Only locals would say something like that. I have problems with these lights all the time. Shoot, every building in the Quarter has this happen from time to time.”

He stretched out a hand to Neeta. “The only important thing is that no one was seriously hurt. Here, Neeta.” Joey handed her a clean towel he had dangling over his shoulder. “For your hand.”

The bikers edged toward the door. They weren’t buying it. The first thing they would do after bolting from the bar would be to run straight to the authorities.

“Billie.” There was a forcefulness to Joey’s voice that I immediately respected. “Miranda is right. You four need to go.”

Letting go of Neeta’s blood-soaked hand, I pushed Billie, and Neeta, toward Joey with the other. “Go,” I yelled in Billie’s ear, and that got her moving.

Neeta slid out of the booth and onto the floor. Joey helped Billie off the seat. He held onto her while I got Neeta up and dragged Ash from under the table, both of my hands now slick with Neeta’s blood. I didn’t even take the time to wipe them off.

Neeta had come to her senses and was wrapping her hand with the towel.

With my arm around Ash’s waist, I headed toward the door.

It felt like a stone had fallen to the bottom of my stomach.

I turned around, Ash breathing in my ear like she had just run a marathon.

“Those guys aren’t regulars,” Joey said as he walked ahead, Billie wrapped around him like Ash was wrapped around me. “They won’t be able to identify you, and they won’t be able to say for sure that I know you all, which of course, I’ll deny. Never seen you before in my life. Another bonus is that we don’t have security cameras in here. Well, we do, but they haven’t recorded in a decade. How far is your car?”

“Only two blocks,” Neeta said behind me. “We’ll make it.”

Would we? I didn’t want to voice this out loud, but I was skeptical.

Joey seemed to read my mind because when we got to the back door, he draped a jacket around Neeta’s shoulders. Then he grabbed a baseball cap off a hook and put it on Billie’s bright blonde head. “Don’t go together. Go two at a time, since they’ll be looking for four women. Make sure you smile and appear as normal as possible.”

I wasn’t sure smiling would help, but I understood what Joey was trying to convey. “Billie, you and Neeta go. Ash and I will be two minutes behind you.”

Billie, bolstered by Joey’s confidence, nodded. She reached up on her tip toes, kissed Joey once on the lips, then took Neeta’s uninjured hand. They disappeared into the back alley.

I glanced up at Joey. “Thank you for helping us. I can’t tell you what it means.” It was true, I couldn’t. From what the news had made me believe, everyone was to be feared. Especially anyone male.

“I don’t buy into any of this propaganda bullshit. The women who have developed these powers, they’re not an enemy. I may not know any of you that well, but I know that.”