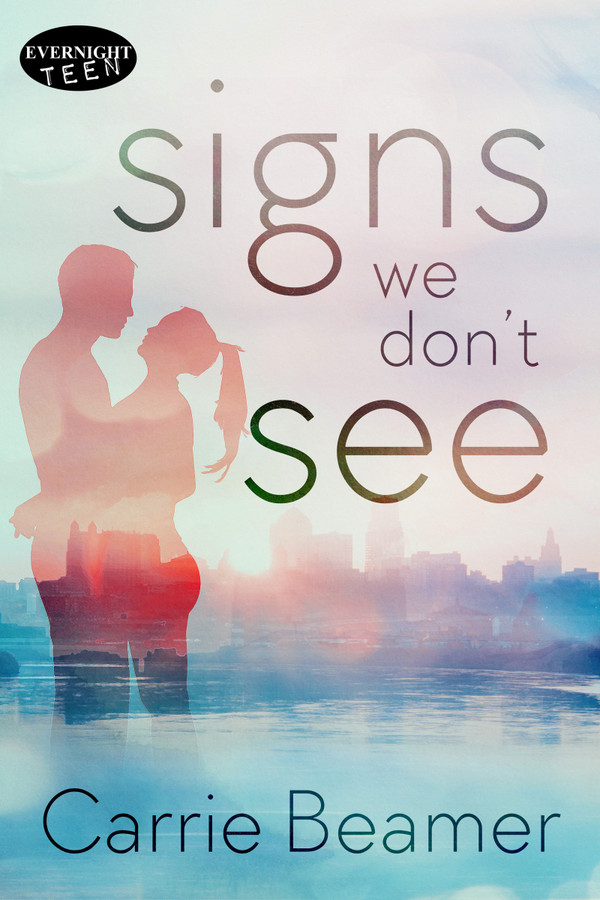 Etta Litali has grown accustom to the superstitious behavior that comes along with being in an Italian family. But when her dad begins to spend his nights stealing signs from every city pole within three miles of their home, her house becomes overrun with dirty poster boards and the neighbors begin to notice.

Stressed her dad will end up on Oprah as the man who hoards stolen signs, Etta distracts herself with a boy named Jordan. Despite the ban Jordan’s clique has on Etta, their connection grows into something special.

Jordan starts to miss school and disappear leaving Etta confused and wondering if their relationship was ever real. Knowing Jordan is hiding something, Etta has to find a way to show Jordan he can trust her or she will lose him. The only way to do that is to reveal to him that she’s been keeping a secret too.

When the signs show up, I know it’s starting again.

The signs are taking over the house and bringing with them the presence of another deep dive into a bout of madness that has somehow already exhausted me. I’m talking about physical signs. Random garage sale signs, home for sale signs, opening soon signs, and any other sign that crosses my dad’s path on his morning outings. He’s usually up before the sun—if he even slept the night before—traipsing through the surrounding neighborhoods like a burglar who steals nothing of value but shouldn’t be there prowling around.

The sign collecting is new, as of the last couple of months anyway. He wheels my old red wagon behind him through the streets, stacking signs on top of each other like he’s lost the child that once bumped around carefree in the back. He drags them home with the belief that he’s saving them from something, but I’m not sure what that is. It’s a sign, not a pet.

In the kitchen, I slip the last piece of stale bread into the toaster as I analyze the sign my dad’s currently wiping down with a wad of paper towels. Covered in frosted donuts in an array of bright colors, it looks like it belongs, or belonged, to a donut shop I’m not familiar with.

“You get that one around here?” I gesture to the sign while I check my reflection in the toaster to see if my bangs have stayed as high as I had them before I left the bathroom. The half a can of Aqua Net I used better not be failing me already. I give one last smudge to the dark brown makeup I strategically blended on either side of my nose—hoping to create the illusion that it’s smaller—and glance back at my dad.

A lit cigarette hangs from his mouth, and the cherry draws dangerously close to his lips, threatening to add to the scars already peppered across them. One of the paper towels dangling from his hands has the word Oprah scribbled across it. My mom, along with every woman on my block, has been obsessed with Oprah Winfrey’s talk show since its debut about a year ago.

Every night before bed, she writes herself a note so she doesn’t forget to tape the show before she leaves for work the next morning even though she’d never forget. Oprah is as ingrained in her morning ritual as brushing her teeth. Stacked on top of our dusty coffee table like giant dominoes waiting to topple are VHS tapes designated for only the recording of Oprah. My mom says Oprah’s going to pave the way for women in this country to stop being made to feel less than men. If Oprah wants to take that on, we’re all ready for it—well, us women. It’s pretty stupid that it’s 1987 and someone still has to pave the way for women to fight for equality, but it’s not surprising.

“I think this one came from McGee Street,” he murmurs around the cigarette, answering my question without looking at me.

On the one hand, it’s a relief he didn’t stay up all night taking something apart, but on the other hand, McGee’s almost three miles away. He’s going farther and farther from our neighborhood, and it’s nagging at me like a hangnail that won’t heal. The last time he went through one of his episodes he took my Walkman apart.

Waking one morning before school, I found it in pieces and my brand-new Run-DMC tape unwound all over the living room floor. He claimed he needed a part from it so he could fix the electric can opener my mom bought at a garage sale. The can opener hadn’t needed fixing. If it had, he certainly wouldn’t have known how to fix it. Also, who gives a crap about an electric can opener? The manual one we have works fine.

There’s no way to rationalize with him when he believes something to be true even when it isn’t. And being mad at my dad means nothing when his brain decides to take a journey away from reality. His mind comes at things prepared to battle whatever it is he sees must be fixed or changed, and it’s overwhelming to say the least.

I start buttering my toast, looking around for my Converse. Man, I miss the days when we had actual food in the house, and I could whip up an omelet. I can make the perfect omelet thanks to my culinary classes at school, but all we have is bread.

“Aren’t you late for school?”

His unwashed hair hangs down in his face. He gives his head a small shake to clear his line of vision, but he still doesn’t look at me.

“Please tell me that you filled out the applications Mom left you?”

I pilfer through the signs piled on the kitchen table, trying to remember where she put them. My dad gives me a sideways glance. He’s afraid I’m messing up his signs. Avoiding a lecture from him that’ll make zero sense and further my anger at this mess, I give up on looking.

My mom spends her weekends scouring the newspaper, trying to find a job for Dad that doesn’t involve him dealing with people. There’s one open for a night janitor at a plastics plant that would be perfect.

You won’t clean floors for money, but you’ll clean someone’s sign for free.

“Fine? We’re not close to fine. You’ve been unemployed for over six months, and we’re running out of money. Mom’s pay from the daycare isn’t enough. We can’t keep this up.”

I spot my shoes and rush to slip them on. He’s right. I’m late.

Set in the 80’s and reminiscent of classic 80’s teen film Pretty in Pink, Signs We Don’t See is a poignant yet entertaining look at family, relationships, mental illness, and a sense of responsibility that goes way beyond a teenage girl’s expectations. I loved the exploration of identity, soulmates, and loyalty that are present throughout the story. The romance is strong, and its many moving parts are well-balanced and entertaining yet thoughtful.

Signs We Don’t See - Carrie Beamer Genre: YA Steam Rating: 0 Star Rating: 5 Well, she did it again! 5 stars Ms. Beamer! I absolutely adore the way Carrie Beamer writes. Once again Carrie takes a sensitive topic and knocks it out of the park. The words are so compassionate and heartfelt. Not only that, but it is so well written I felt like I was right there with Etta and Nessa and one of their friends. (Because I definitely don&#039;t wanna hang out with Stacey!) This book is a fantastic reminder that we never know what others are going through. As I read I kept thinking of that graphic where there’s an iceberg and all you really know is what you see - that very tippy top, but there’s really so much more to the iceberg below the surface. There is SO MUCH we don’t know about people. Even people we love and spend time with daily. Be kind, always. Be kind with your words, your facial expressions, your attitude, your actions … just be kind. Tell your people you love them, that you’re thinking of them. Read less

Another amazing CB book! I loved this SO.. much!! It was a fast-moving read for me, finished in 24 hours. The plot is what had me engaged from the start. It&#039;s fresh and unique! Each character brought something fresh to the table. To mention a few: ☆Etta was the &quot;it&quot; character for me. She is feisty yet soft and we watch her develop in a blink of an eye. ☆Nessa, her bff was an absolute trip and reminded me of an old childhood friend of mine! ☆Jordan was a mystery worth decoding! The story first centers on Etta&#039;s father and his declining mental health. The way Carrie handled the storyline so delicately, blew me away. I could see this being a television series and I would park my booty right in front of the TV for the premiere! A heartfelt read with a heavy dose of Italian culture, lots of laughs, and 80&#039;s references make for the perfect balance! You all should consider having this beautiful YA on your bookshelves!

Such a sweet story! Could not figure out the twist at the end.

I stayed up late two nights in a row because I could not put it down and had to finish it. Love the characters of this book from the BFF to BF. Carrie Beamer’s 2nd book is worth the read!

I enjoyed this book immensely!. Signs We Don&#039;t See is a homage to the 80s! The author makes it a point to help us all understand mental health issues. More people need to read this book to get a better understanding of what others go through when dealing with mental health. The book was very descriptive and made me feel like i was walking the streets in Kansas City and back in High school with Nessa! The love story is palpable. I felt the connection between Etta and Jordan right away!

This story touched my soul! ❤️ Whether you’ve known someone with a mental illness or someone who has dealt with someone in their life with a mental illness or not, this book gives such great insight from all perspectives. It will truly open your eyes and heart for anyone touched by someone dealing with it. Love the characters as they are so real and down to earth. Hoping this shows there doesn’t need to be a stigma regarding it, just needs understanding and love to help everyone going through it. And love always wins!

Wow! This YA book is beautiful and beautifully done. I loved it. It was meaningful, smart and charming with some serious topics. I loved the friends and family support in such a small community. Everyone needs a Nessa in their lives a friend that will love you, support you and also help you put your needs first. I highly recommend this super fast YA read.

Keep What Remains by Carrie Beamer