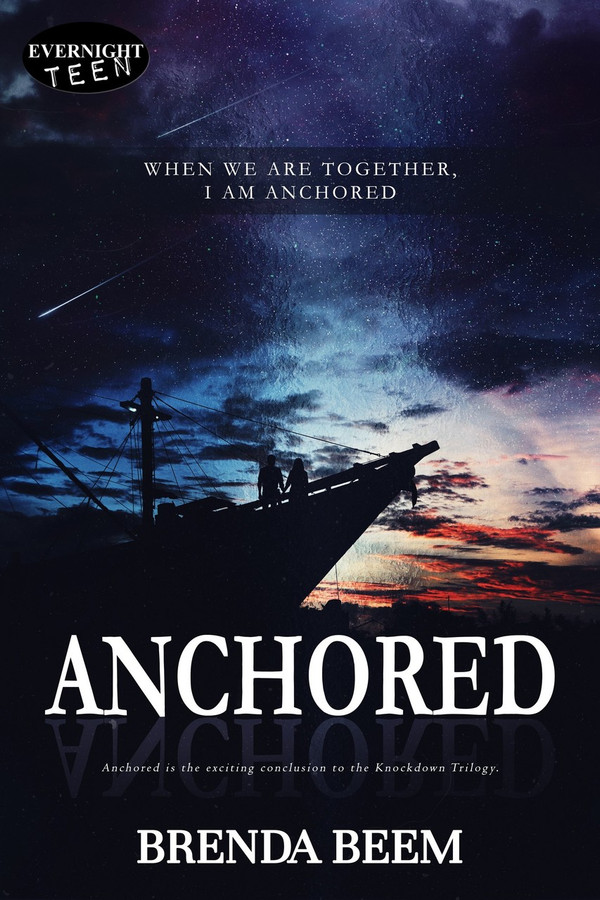 The stakes have never been higher for Toni and the crew of Whistler. The sky remains dark, the north is still frozen, and refugees stream into southern states. Food, water, and fuel supplies have dwindled. The teens have been sailing to Mexico to reunite with their families, but Mexico has closed its borders.

How will Toni and Whistler’s crew survive and locate their families? Can Toni and Takumi’s young love last? Are Zoe and Dylan really going to have a baby?

Anchored is the exciting conclusion to the Knockdown Trilogy.

“The cockpit is our best cover and place to shoot from. We’ll have to raise up to see, but when we do, we can see in all directions.”

Takumi shrugged. “I’ve never shot a rifle in my life. Only a handgun. But, how hard can it be?”

“I wouldn’t know. I’ve never shot one either.” I giggled nervously.

“Now you tell me. I thought it was my chlorine tinged hair.”

“Yeah, that too.”He pulled me close. “I wish we had more time.” We touched foreheads. He mouthed, “I love you.” We kissed and held each other close.

My racing heart slowed. It beat in time with his. A stillness came over me. I didn’t want to die, but we were doing the right thing. And no matter what happened, we would be together.

The magical spell was broken by the roar of boat engines.

They were closing in on us.

Farther down the coast of California, the teens find anchorage for Whistler. As seasoned sailors and having survived attempts on their lives, they are leery of strangers and survivor groups. And so, they should be. When they find a large camp of survivors being helped by the military, they have guarded hope, for there too, trouble lurks. The whereabouts of Toni’s and Dylan’s parents are still vague and two members in the group need to be dropped off in Mexico, which has closed its borders to the U.S. What more can go wrong? The author finds plenty. Sixteen-year-old Toni also finds her voice in this finale. What more can I say? The series is awesome, the research amazing. I learned a lot about the havoc of volcanic activity in Indonesia and its potential.

The culminating book in the Knockdown series did not disappoint! The novel was action packed from beginning to end. I sped through it just to see what would happen. I will miss the teenage Whistler crew. It has been a pleasure reading about their encounters and the many dangers that they have overcome in their quest to find their families.

Really enjoyed this third book in the Knockdown trilogy written by Brenda Beem. She presents her characters so realistically that you feel that you really know them and what they are thinking. The visualization of the tragedy that occurred on land and in the sea was described so well that you felt like you were there yourself. All of the twists and turns of the book made me feel like I didn&#039;t want to put it down. This book can really hold a person&#039;s interest, and was definitely a book that a young adult or an older adult could totally enjoy. I felt so attached to this make-shift family on the Whistler, that I didn&#039;t want it to end. I hope Brenda Beem will be writing more wonderful books!!!!

Congratulations on the last novel of the series Brenda!! Again I found myself racing to get to the end to find out what happened to all of the characters and the boat Whistler ! I was delighted by the adventures and misadventures of Toni and company on the sea and the land--tutorials on becoming the new pioneers of their day. By the way, I had read a Wyoming pioneer woman write about rattlesnake tasting like chicken. So when the teens ate the snake, I immediately thought of that. What great cuisine taste and daring to be inventive and daring. I found myself thinking of the boat Whistler as a metaphor of the new life experienced by the teens and others-- you get &quot;knockdowned&quot; and get up and go on with bruises but learning to navigate the seas of life and think on your feet as you go. I hope the series makes it to the movies--maybe sailing may be the new archery reflecting on The Hunger Games trilogy. Love it!! Alice Finnell

What a great ending to an action packed trilogy. It had been awhile since I read the first two books so I was thankful and amazed how the author began the book to help the readers be reminded of where we are in the story. There were many twists, turns, and unexpected events that made the story suspenseful and very hard to put down. I would recommend this book to teens and adults alike - much like the Hunger Games were initially created for teens, the adults loved that series just as much too. I think this series falls in that equally entertaining for both group.s

Book three of the series was an exceptional ending to the first two novels. It made you hope for book four to continue the saga. This series would be great in movie format -we can only wish

I wondered how the series was going to end. Would it just be a simple, unrealistic ending where the world suddenly turns better and the everyone sails away into a glowing sunset? Nope. The author kept true to the first two stories. This third, and last novel in the series is just as suspenseful, action packed, and very realistic as the first two. Life stays a real challenge for the boatful of kids. I just hope I, or my kids someday, would be able to do as well if the ‘big one’ does hit. Finally, I love Toni and Takumi, but I was worried about my favorite character, Zoe. Would she be able to live through all of this, mature, and keep her unique, fascinating personality? Well . . . you’ll have to buy “Anchored” to find out.

I&#039;m wiping the tears away with satisfied closure. I loved the whole series! All the adventures were so real. I really enjoyed the ride.

Get ready for the non-stop challenges and twists to the crew of the Whistler! As you read, you feel you are drawn into the experiences with them. I couldn’t stop reading until I finished. You won’t want to miss the conclusion to this cliff hanging trilogy.

What an adventure. The gang splits up and face their hardest challenges yet. Part of the crew goes ashore, and we see the devastating effects on the land and on the people. The descriptions are rich and epic (it’s a book but some visuals are imprinted in my memory like a movie). It’s a tale of survival and hope. Ms. Beem switches from breathtaking actions scenes to heartwarming moments of romance and friendship with such ease! I love how the author brings emotional depth to a fascinating and diverse cast of characters. It was hard to say goodbye to them. And the ending is perfect!

I wondered how the series was going to end. Would it just be a simple, unrealistic ending where the world suddenly turns better and the everyone sails away into a glowing sunset? Nope. The author kept true to the first two stories. This third, and last novel in the series is just as suspenseful, action packed, and very realistic as the first two. Life stays a real challenge for the boatful of kids. I just hope I, or my kids someday, would be able to do as well if the ‘big one’ does hit. Finally, I love Toni and Takumi, but I was worried about my favorite character, Zoe. Would she be able to live through all of this, mature, and keep her unique, fascinating personality? Well . . . you’ll have to buy “Anchored” to find out.

It&#039;s finally here! I&#039;ve been anxiously awaiting the conclusion to the Knockdown series. I can honestly say that this did not disappoint. As action-packed as the first two books, Anchored has it all: danger, romance, fear, and hope. Toni and the crew split up for part of the book--one group stays with the sailboat Whistler, the other goes ashore to search for their families. I don&#039;t want to give away the ending, so I&#039;ll just say that my heart was racing while I flipped through the pages, needing to find out how it would end. I highly recommend this series.

Loved this book. It&#039;s a perfect ending to the series. The author did not fail to surprise me with the challenges that my most favorite character Toni had to endure. And does she find true love? You&#039;ll have to read it to find out. I also loved the character arcs of Dylan and Zoe in the story. Overall what a fantastic, satisfying finish to the series! Action-packed and full of emotion.