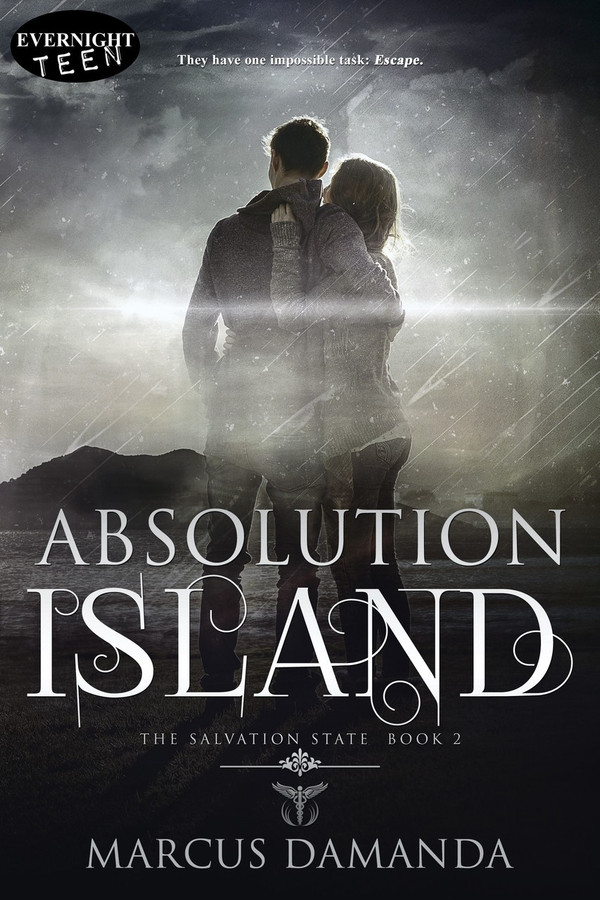 The chase is over. For Rebecca, Daniel, and the rest of the Forgottens of Second Salvations, there is only one choice: get with the program or die. But there’s a spy lurking somewhere within the cabins of Angel Island, someone with contacts in the outside world. Ruth Black is determined to find out who it is before the world learns the truth about her—and about the special punishment ministry of her husband, the Reverend Matthew.

Rebecca and Daniel are not destined to remain forgotten very long.

Welcome to New America: one nation, under God. An island prison, just for kids, built to convert the very worst of them. Kids like Rebecca and Daniel, with one impossible task:

16+ due to violence and language

You already know, Rebecca thought. She returned his smirk. You know, and you think I’m crazy. But you’ll still say yes.

The rain had stopped. The fence had gone silent. Fog gathered.

The game she had mentioned—taking turns to conjure up a step-by-step plan to accomplish an impossible task— could be more than just a game, if they played it well enough. Carefully enough.

“Escape,” she said. She gave Daniel’s hand a squeeze, locked eyes with him, and waited.

“First step’s on you,” she said. Then she looked up at the clock tower. Five minutes until lights-out. “Better go.”

Daniel sighed, nodding again. Then he reached behind her head to draw her close, brushing her cheek with his thumb. Here—right out in the middle of the quad. Sure, it seemed empty enough right now, but…

She eased his hand from her. She smiled at him but shook her head. And she dashed away before he could say anything more.

There wasn’t time. Being late for lights-out would mean trouble. It would mean tallies. She passed the clock tower, splashing through the flooded footpaths that would lead her back to her cabin at 12D Bethlehem Street.

When she saw him again, would he have the first step? If not, she’d have to come up with it herself and let him think of Step Two. She considered. What was the first, most immediate, problem?

But no—that wasn’t how the game was played. It had been her challenge. The first step had to come from him. If this could be somehow fun, then they’d feel free to be creative, to share any crazy idea that might cross their minds. And that was what she needed him to do. That was what she needed herself to do. Let it somehow be both real and a game. And that means not breaking the rules.

Daniel goes first. There’s no need to think about it until he’s had his turn.

As for being tardy at lights-out, she was more worried for him than she was for herself. Rebecca had Philis for a cabin-sitter, and Philis would be gone a while yet. Daniel, meanwhile, shared a cabin with Asher, who had given Daniel three tallies already and was likely to be waiting for him. It was a long, long time until next Saturday night, when the Absolution Tally Board would clear again.

The magic number is ten, she thought. Which means Daniel can hardly afford to get even one tally a day.

It was going to be hard for him, not having been brought up in the church, to learn how to stay out of trouble in a place like this. She didn’t know if it could even be done. Escape, crazy as the word sounded in her own mind, might actually be easier.

Escape to where? she asked herself for the thousandth time. Even if it can be done, you still have no idea where to go.

And again, she answered herself with, We’ll just have to part that sea when we get to it, chicken guts. It was her devil’s half talking again. She made no effort to tune it out. Stepping up the soft wooden steps at her cabin’s only door, feet squelching on the creaking wood, she found she was becoming more and more comfortable with that half of herself.

She glanced back over her shoulder, downhill, toward the clock tower and the quad. Daniel had gone. He had two minutes to get himself inside.

Hurry, she thought. You don’t want to keep Asher waiting.

Though I really love Marcus Damanda&#039;s writing, I think Absolution Island fell into the &quot;second book&quot; category. What I mean by this is, a lot of the sub-plots were hashed out more, but not much really happened to progress the main storyline. Don&#039;t get me wrong--I love the story. It&#039;s intriguing, it&#039;s intense, it&#039;s downright frightening. But things I wanted to happen didn&#039;t happen. Though this will make for a very, very action-packed book three, I think Absolution Island could have ended with some huge movement to cap it all off (and I can&#039;t tell you what I wanted to have happen without adding a spoiler, so I won&#039;t do that) that wouldn&#039;t have ended in a horrible cliffhanger. I still gave the book five stars because the storyline is just that good, and it ultimately did what it was supposed to do. It made me want more. May I please have book three now, Mr. Damanda?

Demand does it again! Absolution Island picks up immediately where the Salvation State left off, and it throws you in the middle of chaos as you are trying to understand the rules of this prison camp for kids just as the characters Rebecca and Daniel are trying to survive until they can escape. New America is a frightening place to live where faith has been left to be interpreted by those with a very dark vision. Demand writes in such an intense, yet clear way, that you feel like you are camper on this cursed island. How can I survive until book 3 is published! Please hurry! Don&#039;t leave me hanging!

Although it&#039;s been a while since I read book 2, I dove into this and became reacquainted with the characters and their dark circumstances immediately. I read it in one day. Damanda has a consistent style with fantastic pacing and a style that weaves into the reader&#039;s mind and won&#039;t let go. I kept wanting to read about Rebecca, Daniel, and the other fascinating characters embedded in an amazing plot.

Though I really love Marcus Damanda&#039;s writing, I think Absolution Island fell into the &quot;second book&quot; category. What I mean by this is, a lot of the sub-plots were hashed out more, but not much really happened to progress the main storyline. Don&#039;t get me wrong--I love the story. It&#039;s intriguing, it&#039;s intense, it&#039;s downright frightening. But things I wanted to happen didn&#039;t happen. Though this will make for a very, very action-packed book three, I think Absolution Island could have ended with some huge movement to cap it all off (and I can&#039;t tell you what I wanted to have happen without adding a spoiler, so I won&#039;t do that) that wouldn&#039;t have ended in a horrible cliffhanger. I still gave the book five stars because the storyline is just that good, and it ultimately did what it was supposed to do. It made me want more. May I please have book three now, Mr. Damanda?

Yes, we are back in the nightmare world of the Salvation State, stuck on an island brutally guarded and technologically walled off. If we try to run and they catch us, the best we can hope for is nails hammered into our wrists. And if we don&#039;t run and are really really good we might be chosen to the The Lamb. You know what happens to lambs, don&#039;t you? Marcus Damanda has done it again. He&#039;s an author who will grab you in the first sentence and hold you till the last word on the last page. And then he will haunt you. Prepare to stay up all night once you pick up this book. And look forward to savoring the story, the people, the vision for years to come.

This incredible book launches straight back into the terrifying drama surrounding Rebecca and Daniel. It was like there was no break between book 1 and 2 - I remembered everything from #1 without needing to pause or rethink, because book 1 was so vivid and original. Book 2 well and truly lives up to the first book&#039;s high standard. Do not read this book if you have to be somewhere tomorrow because you are not likely to get much sleep. It is gripping - it grabs hold of you and drags you along on a thrilling journey that is sometimes devastating and sometimes spirit-soaring. Dystopian yet inspiring, respectful of faith yet damning of dogma - given the state of things in the world today, the release of this book could not be more timely. I&#039;m thoroughly invested in Rebecca and Daniel and am dying for Book 3. Thank you Mr Damanda for another shattering, beautiful story!

Suppose the worst summer camp you ever went to teamed up with the darkest, cruelest reform school you could imagine—and that it was being run by something that talked like a church but didn’t believe in any form of love or mercy. Suppose that church had taken over the United States government. All the libraries have been burned a generation ago. The media skillfully parrots the government line. The cities have been poisoned by terrorist dirty bomb attacks. The sprawling suburbs seem comfy enough, if you don’t mind getting sent to reform school for cutting class—once! Suppose you’d already tried to run away, after you realized your parents had been the victims of a political assassination. But then you got caught. That’s where Rebecca Riggs finds herself in Absolution Island: locked down in a punishment camp run by the sadistic pastor Matthew Black and his calculating wife, Ruth. Absolution Island is a place designed to break the spirits of kids like Rebecca—that is, if they live through the process. There is only one way for Rebecca and her friend Daniel to survive: escape. Except that’s supposed to be impossible. Absolution Island really is an island, accessible only by boat or air. And there is heavy, heavy surveillance and punishments beyond imagining if you get caught… Marcus Demanda’s Absolution Island (The Salvation State, Book 2) is a page-turner, a scary and relevant miracle of a book. Dark as it is, it is also warm-hearted, with lovable (and hate-able!) characters. Angry as it is at forced piety, it is also deeply spiritual, and very much about love in all its forms, and what people are (and are not) willing to risk. Rebecca and Daniel’s world at Absolution Island is profoundly sad, but also riveting. You’ll care right away about all the characters, not just the main ones: Vex, with his glasses and his secret, and the star student, chosen to be the Lamb, Asher. At Absolution Island, you see, they take the story of the Crucifixion very literally. Asher’s faith could cost him his life. Absolution Island is an all-night read for teens and adults both. Bracingly relevant, sometimes darkly funny, and always compelling, it’s a thrilling ride—one you must take!

Devils in the Dark by Marcus Damanda