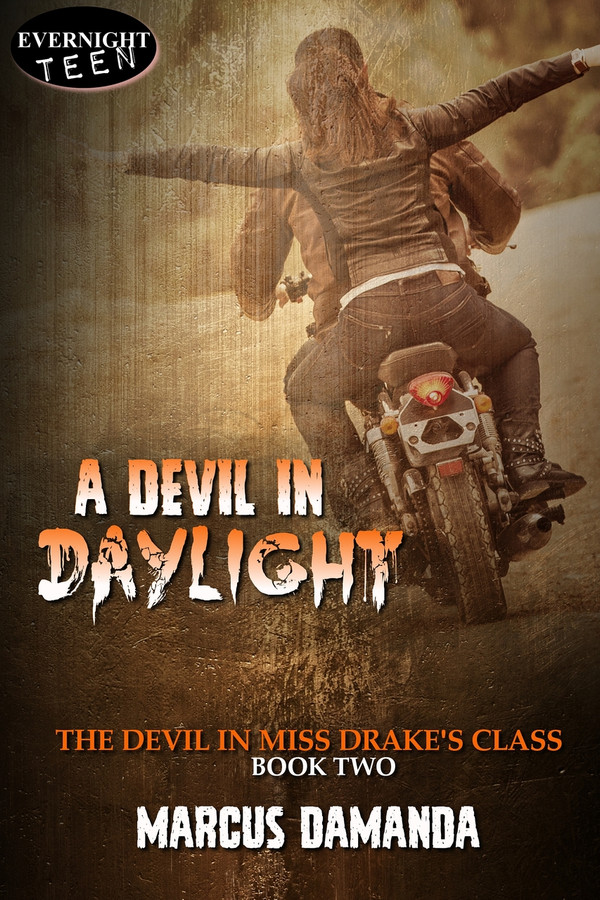 The Devil in Miss Drake's Class, 2

“You will account for what you did to Audrey.”

After three months in the suicide prevention wing of St. George’s, Audrey Bales is finally coming home. Enrolled at a new school, she plans to reinvent herself with a new look, new friends, and a second chance to be just like everyone else. But the kids who drove her over the edge aren’t through with her yet.

And one of her new friends has an agenda all his own.

During the day, the halls of Battlefield High will echo with their screams.

“It will never stop.”

And at night, their screams will be silenced.

“Until one of you ends it.”

16+ due to violence and adult situations

Blood welled up from her wrist, at first in bubbles and droplets, then in a line.

Ignore the pain. Block it out. Deny it, like it’s not even there.

And it wasn’t. Weird. This was supposed to hurt.

Her reflection in the computer screen showed black hair. And that, too, was weird. She hadn’t had black hair in months. Not since her first days in the hospital.

Nor was she supposed to be seeing him. She’d beaten him—banished him.

She had to saw to break the vein. A small, red jet squirted over her keyboard.

On the screen, Val—her one-time best friend—was reaching out to her. Audrey? Audrey, don’t be dumb. Come on.

Alex stopped talking, stopped coaching. From behind, he held on to her shoulders and squeezed.

She set down the knife in a puddle of her own blood, then picked up her cell phone and took a picture, even as her wrist squirted again.

She hooked the phone to a USB cable and to the computer. She posted the picture, unhooked it, and let it drop. It clattered off the side of the desk and onto the floor, but Audrey didn’t even notice.

She tried to put her chin in her right hand. She wanted to watch the responses. See what Val thought. See what Maggie thought.

Maggie, who had started all of this. Maggie, who had ruined Audrey’s life because she’d thought Audrey had been ogling her in the locker room at school. Spoiled, rich little Maggie Lassiter, with the angel earrings—it had been those Audrey had been staring at—and the countless followers that Maggie called her friends. But it hadn’t been enough. No, she had to steal Audrey’s friend, Valerie Mills. Her only friend….

Putting her chin in her hand didn’t quite work out. Her elbow slipped in the blood on her desk. She felt her face hit the hard wooden corner of the desk on her way to the floor.

But instead of hitting the floor, Audrey sat up in her own bed, awake and breathing hard and holding her left wrist with her right hand.

She looked… scarred, but whole.

Her parents had purged her bedroom nearly to emptiness, but her computer was still there, a shadow near the window.

Audrey kicked her legs over the side of the bed and went to it, powered on, and thumbed the monitor. And, amazingly, she yawned, even as her heart began to settle back toward its normal speed and rhythm.

She found her water bottle and Geodon, and checked her clock as the computer slowly hummed to life. Yep, close enough. She took her pill.

She smiled, rather sleepily. Everything was still normal. She’d just had to be sure.

Sunlight began to peek tentatively through her window. Audrey set her chin in her right hand and waited for it.

Daylight could not come soon enough.

Alastair Hutchinson lay flat on his back on top of his perfectly made bed, but he did not sleep. Had not slept.

He watched the sunrise.

We should be looking, said one of the voices that lived inside of him. We’re wasting time.

“Why look?” he asked. “There’s an unsettled account at the school we’ll be attending. I’ve found everything we need.”

Audrey is not an unsettled account, the voices protested. She’s alive.

“I’m not talking about her,” Alastair said. “You haven’t been paying attention. There’s another.” He laughed, softly. “Three days from now, we’ll be sitting in her first period class.”

But not as Alastair Hutchinson, he thought. No. As a name she’ll recognize.

The host stirred. We need to move the line, said another voice. This isn’t helping.

“I’ve got that covered too,” said Alastair. “You won’t have to wait long. Trust me.”

Although it is published by the Evernight Teen division, Marcus Damanda's series has all the right ingredients for a skin-chilling thriller for adult readers. A DEVIL IN DAYLIGHT is the second book in The Devil in Miss Drake's Class Series. While I didn't read the first book, I would recommend that readers start at the beginning to get the full impact. The storyline picks up with Audrey on the brink of a fresh start. However, the tormentors of her past are not quite ready to admit defeat. With that determination channeled into social media, it's not long before the drama kicks into high gear. Add a parallel storyline featuring a demonic character and the book quickly starts hitting high marks on the supernatural scale. Some elements of the story, particularly the hateful teenagers and their use of social media, are so realistic that it is eerie. I found myself quickly getting caught up in the storyline. While I could have done without the cliffhanger, it certainly was successful in making sure that I added the next installment of this series to my list. It might feature a storyline geared for teens, but it had plenty of appeal for this adult reader. - See more at: http://www.theromancereviews.com/viewbooksreview.php?bookid=17112#sthash.ZxsLwOWv.dpuf

Hey girls you think the bad boy is the way to go. Well after reading this you will see "the nice guy" as a safe bet.

Audrey Bales is recovering, or trying to recover, from two things: a failed suicide attempt and the extreme bullying that led to that attempt. She starts attending a new school minus her former emo attire, but there are two entities that won’t let her be. The first one is the Facebook Fifteen, the group of students who bullied her online and in person. Their actions led to suspensions, expulsions, tense family scenes, and all sorts of other things. They want to make Audrey pay for exposing their dirty bullying secret to the public. The second entity is a disgusting, persistent demon who changes shape. He walks among the students and befriends Audrey. He looks like a normal teenage boy, but there’s nothing normal about him. He wants to ensure that the Facebook Fifteen pays for what they did to Audrey. In this second book of the series, we finally get to meet Miss Drake. She didn’t have a huge role, but the ending promised we’d see more of her. There were many switches in viewpoints, but they flowed easily. The demonic, shape-shifting, insect-filled, rotten meat, and murder scenes were spine-tingling. Damanda is like the Stephen King of YA. I can’t wait to read the next installment.

Part two of Audrey's journey is gripping...and frightening!Readers will relate to the agonies of guilt and making choices.

This book ramps up the suspense from the first book. Audrey is unknowingly caught in between two competing forces, one trying to bring her down and one defending her. I love how the book really shows the both the good and evil sides of human nature. It's hard to put this one down!

Devils in the Dark by Marcus Damanda