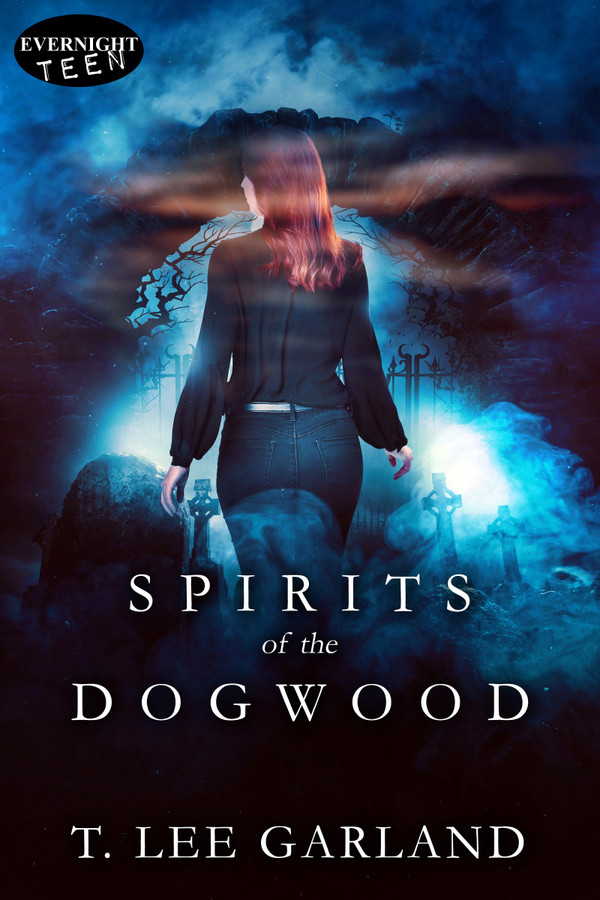 Rhiannon has a secret...

One that made her mother abandon the family. Forced her dad to move them to a new town. Their new home is an old farmhouse across from a cemetery with a disturbing and terrifying history. At least Rhiannon makes new friends for her senior year, including the mysterious Jackson Parks.

Life is never so simple though...

A serial killer is operating in Cainsville, and he’s killing girls from her high school. Rhiannon may be the only one who can stop him, but doing so would mean she’d have to reveal her secret. Can she trust the people she loves not to leave her as her mom had?

With every step I take toward the cemetery, my legs become heavier and heavier. The ever-swirling ground fog is like tentacles of the dead that seek to stop my forward progress by wrapping around my ankles and holding me back. Up ahead, the cemetery sits blanketed with the churning fog, which has taken on a life of its own. It’s making it hard to spot a spirit from the seemingly alive vapor moving with an agenda that can only be described as ominous.

“Get a grip, Rhiannon it’s only fog,” I mutter under my breath. I have never feared the spirits. They have never given me a reason to fear them. Most have come before me confused and lost, but always, if they even acknowledged they see me, they are friendly and curious. When I can help them find their way home, I do, but most eventually find it themselves and disappear from my life. I never see them again. Never have I encountered an evil spirit who wished to do me harm. I remind myself of that as I push open the black, wrought-iron gate and enter Dogwood Cemetery. The seldom-used gate creaks a warning that sounds alarmingly loud in the silence of the graveyard. It’s like a warning siren to the dead that I’m here.

I take a deep breath, close my eyes, and concentrate. I allow myself to feel what those buried here feel, and for the most part, it’s fear. There’s also anger, resentment, and hate. This cemetery is not a peaceful final resting place for many. I attempt to push this feeling to the back, but it’s powerful, and it surges forward, filling me with a darkness I’ve never experienced. There is so much pain here … pain, sadness, and fear, that it almost overwhelms me. It consumes me in an evil darkness from the inside out.

I open my eyes and find the fog has thickened. It’s suffocating, weighing too heavy on my chest and making it hard to breathe. I’m propelled forward by an unknown force to the center. I move straight toward the dogwood tree. Reaching out and touching it, I’m surprised to find it vibrates with a life force, almost like a human heartbeat. “What do you want?” I whisper. “Why have you brought me here?” There is no response. The silence in the graveyard is absolute. There are no birds chirping, no squirrels or chipmunks scurrying around under the fallen leaves. Nothing that lives is alive here … except for the tree itself and me.

I snatch my hand from the bark of the tree and look around. I’m trying to see through the thick whirling fog to scan the ground for footprints, or perhaps something dropped by last night’s trespasser. I refuse to believe what I saw was a spirit. It was too solid and much too real. Yet, how had he managed to simply disappear when my dad had arrived?

“Jenni?” I call out, but she’s either unable or unwilling to appear. The silence around me is unnerving, and I tremble with fear. My heart pounds loudly in my ears.

Frustrated with the inability to see through the canopy shrouding the ground, I drop to my knees and use my hands to brush away leaves and shoo away the fog. Finally, there at the base of the thick tree trunk, in the soft, oddly powder-like dirt, is what I’ve been searching for, a shoe print.

I normally don’t like paper back books because of the texture of paper on which most of them seem to be printed. However, this book feels so smooth that I kept finding myself absently thumbing the edges as I read. As someone who enjoys physical book copies over digital ones, that was a big deal to me. That alone is worth 5 stars, but so is the actual story that graces the pages. Although the targeted audience is about half my age, it was easy to enjoy the story told from Rhiannon’s perspective. Her circumstances keep her more level-headed than most her age. I often found myself thinking about the story as I went through my workdays. I just wanted to get back to reading it to find out how the mystery would be solved.

Not Guilty by C. Lee McKenzie