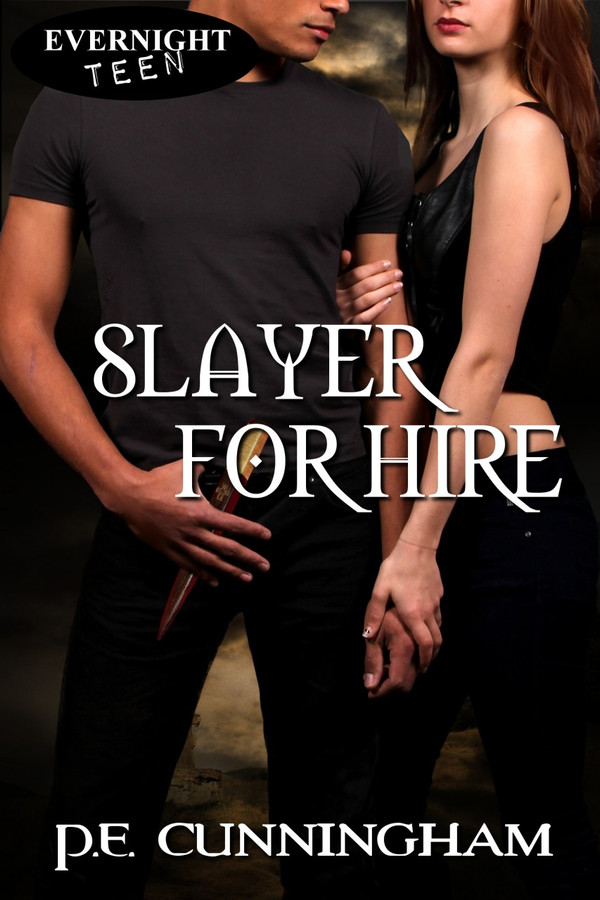 Nineteen-year-old Billie Eshleman loves the TV show Slayer for Hire, and has a major fangirl crush on its hunky star, Dylan Garber. When the show comes to her home town to film a movie version, it’s her greatest dream come true. Unfortunately, she’s not the only fan trying to crash the set. A real vampire has fixated on the fictitious “slayer,” and is determined to make Dylan her mate—like, for the rest of eternity.

With help from Dylan’s co-star, Matt—an actor with vampire-related secrets of his own—it’s up to Billie to keep her idol from joining the ranks of the undead long enough to finish the movie. And, incidentally, keep herself alive in the process.

The guy with the cross tattoo shook himself all over like a dog. Then he grinned at me with those big prosthetic teeth. His B.O. hit me with a stench like three-week-old hamburger. “You look tasty,” he said. He started toward me.

All of a sudden my sight of those scary teeth was blocked by a shapeless wool poncho. I never heard Dina run up. She just appeared between me and Tattoo Boy. They started to circle like dogs. I backed out of reach, but didn’t run. I’d just seen this skinny guy toss Rolly like a basketball. Dina would need help. What I could do with no weapons, I had no idea. Kick, maybe? Worked on the hockey field.

That’s when I noticed Tattoo Boy’s eyes. When he’d grinned at me, they’d been blue. They were red now. I don’t mean bloodshot. I’m talking solid scarlet, with a black pit of pupil in the centers. He hadn’t had a chance to slip contacts in. My gut did a ten-story plummet. Reality had just run off the rails here.

He bared his pointy teeth at Dina and hissed.

She bared her own pointy teeth and hissed right back at him.

He looked at the stake. Then he looked at her. His lips started to move. Before any words could form, lips, face and everything else cracked and crumbled and collapsed on the mall’s worn linoleum with a little puff.

I kept waiting for Rog to yell, “Cut.”

Dina calmly plucked another stake from her bandolier. She looked over at me. Her eyes were solid crimson.

She left me before I could speak or scream, or do anything other than pant. I stared around at everything except that pile of ash on the floor, and realized our part of the mall was almost deserted. I glimpsed Matt, recognizable by his height, up at the other end, herding people toward the exits.

What about Dylan? Surely they’d gotten him to safety when this disaster started, right?

I ran, but not for the nearest exit. I headed for the spot where I’d last seen Dylan. Matt seemed to have his own safety under control, but I couldn’t cut out until I knew for sure Dylan was all right. What kind of fangirl would I be if I did?

But first, I detoured for the sporting goods store. I needed a weapon. I grabbed a hardwood baseball bat from the front-of-the store display. Not my first choice, but it was handy. Then I plunged toward the junkyard of abandoned cameras, dollies and cranes where Dylan had last been filming.

I didn’t see anyone around. Maybe they’d all got out. Then two shapes buzzed past me, so fast I only saw blurs, like the vampires on Slayer for Hire, just without the SFX.

Trust me, I did not like how the evidence was mounting up.

The blurs slowed enough to resolve into two of the fang-faced attackers. They grabbed two people struggling to wedge themselves out through an emergency exit. One was Rog. The captain of this flick had stuck with his sinking ship past the last minute. He had Dylan with him, at least until the leather boys yanked them apart. I hefted my bat and pelted toward them.

“Hey, I know you,” one of the Fango Brothers said to Rog. “You were on Leno. You directed RoboSoldier II. Man, that movie sucked.” He swooped in close. He looked like he was biting Rog’s neck.

The other one had hold of a struggling Dylan. “Relax, pretty boy. We’re part of your fan club. Our president wants to meet you. She sent us to pick you up, seeing as how you won’t answer her letters.”

“I don’t see her letters or emails or anything. We’ve got people who do that.” Dylan abruptly stopped struggling. He’d finally noticed the guy sucking on Rog’s neck. “What the hell?”

His captor shrugged one shoulder. “He skipped breakfast.”

“So’s this,” I quipped, and swung the bat. Go for the legs, that’s what they taught us in field hockey. Okay, no, not the coaches. Sarah McClosky, our team captain. She could trip an opposing player six different ways and make ’em all look like an accident. Her dad was a cop, so she knew what to aim for. Her tricks were also effective against grabby dates who wouldn’t listen to “no.”

I cracked the bat against the guy’s knees with all the strength I could muster. Considering the weight of the trays we have to lift at the dinner rush, that’s a lot more than you’d think.

He let go of Dylan and staggered back. He should have gone down, but he didn’t. I retreated a couple of steps. Dylan whirled toward the exit door and clawed at the unyielding bar, totally ignoring the “Push” sign.

I took another swing at Fango’s legs. I thought I was fast, but he beat me. He caught the bat on the downswing and yanked it out of my hands. He tossed it away. It clattered and rolled across the floor, too far away for me to make a dive for. Fango grinned at me, and licked his lips.

I found Billie a really likeable and sympathetic character, drawing the reader into her world. Despite the dire and scary situations she finds herself in, she manages to keep her head and emerges as the real heroine of the story. She is obviously extremely obsessed by Dylan at the start of the story, a feeling that many young readers will be able to relate to. The story flows quickly and there is constant action. I would recommend this novel to any young person with an interest in adventure stories and the supernatural.

Meet Billie: waitress by day and closet fangirl by night. She is totally in love with "Jesse," the lead character in her favorite TV show, "Slayer For Hire." Her life had been in neutral until they decided to make a movie to fit in with the TV series--and they are filming it in Billie's home town! What can go wrong?... This was a fun book that will ring a bell for anyone who is, will soon be, or used to be a 19-year-old girl. It has highly embarrassing situations (which Billie got herself into in the first place), arch frenimies, hot guys who turn out not to be nearly as cool as their best friends, a psycho fan who is trying to kill off everyone she thinks might be a threat to her "relationship" with Jesse... including Billie, herself!