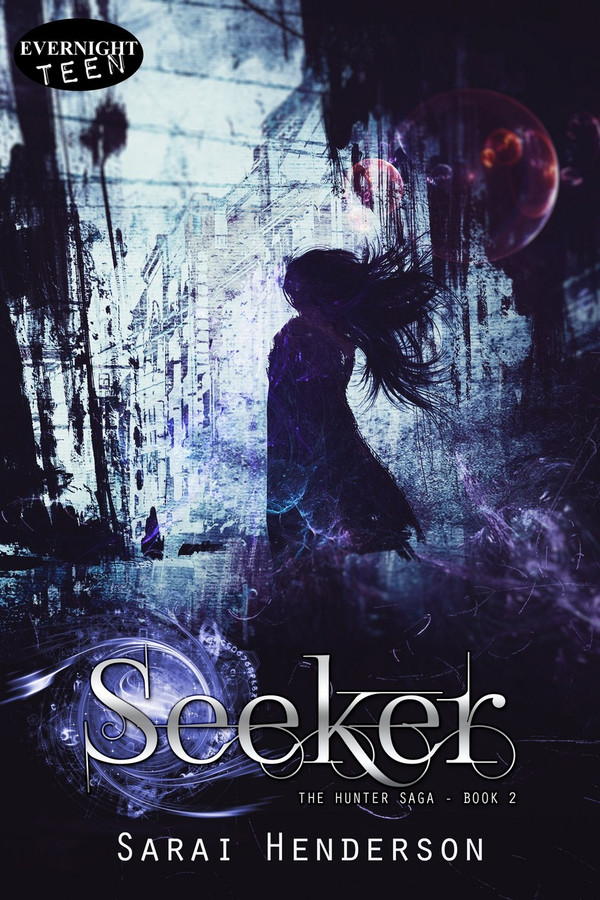 Six months ago, Hunter’s life turned upside-down. Seeker is dead, a tragedy that’s left Hunter empty and alone. Talon, an agency of superhumans, now looks to her for leadership. When several agents are found dead with mysterious injuries, she has no choice but to track down the killer herself or risk the lives of her teammates and friends.

Hunter finds herself in Arizona, where things turn deadly, sending her right into the hands of the one person that could take everything from her—her mother.

Forced to do Mother’s bidding, Hunter does the only thing she can ... she survives. One grueling day at a time. Will Hunter become the next victim of the killer who has taken so many of her friends’ lives? Will she become the murderous telepath Mother wants her to be? Or will she somehow find a way out of this deadly situation full of so many risks?

“He’s at the bar.”
“He’s not at the bar, He’s only eighteen.” Jacobs thought he had one up on me.
“Trust me, he’s at the bar.” I turned to Troll. “We need to be careful approaching this kid. We don’t know what his abilities consist of, and I don’t want to risk him using them on us. I’m also not sure if he can sense us coming, so hang back, just in case he tries to run.”
Troll nodded. He knew what to do if things got messy, but I wasn’t sure if Phoenix knew how to read the gaps in his telepathy vision and know we were coming. I guess we would find out.
“What do you mean ability and sense? Is this some kind of code for a weapon?” The look of confusion on Jacobs’ face was only trumped by the strange silence in his mind. Priceless. He had no idea what was going on, and could mess this whole thing up if he couldn’t stop thinking about what we were here to do. If Phoenix was listening to the minds around him, then he would know we were coming. It was a good guess that he already knew. I shook my head, kicking myself. I knew we should have given him an inhibitor, but Ramsey thought it wasn’t needed.
“Look, Jacobs.” I faced off with him, putting my hands on his shoulders to keep him from moving and to make sure he was listening. “The world is a strange place. Stranger than you are aware of. Some of the things you might hear or see are going to blow your mind, but you have to trust me on this one and do as I say. If you don’t, you could blow this whole mission.”
Jacobs struggled inwardly. He thought I was a joke, some kind of trick Ramsey was playing on him, just like that time at the academy where he was tricked into a closet with a skunk. Somehow, I had to convince him that I was a force to be reckoned with.
I chuckled at the visions Jacobs was sharing unknowingly, as I struggled to keep my thoughts together. “Really? You got in the closet with a skunk? That’s gross.”

I really enjoyed Seeker, which is the second book in the Hunter Saga series. It was exciting and thrilling thanks to Sarai Henderson's fantastic writing, and I fell more in love with these characters! A lot has changed since the last time we saw Hunter.. Talon has been trying to clean up their horrible reputation by working alongside the CIA and going legit. And I loved this. After the events from the first book, Hunter is now considered the leader of Talon, everyone looking to her for the right answers. And she made a great leader in my opinion, even when it's clear that she's still grieving from Seeker's death. (I'm still not over it either !!!) Hunter is still so young but being forced into this position has matured her in a lot of ways. I enjoyed seeing this side of her character - she means business this time and she's not backing down from any challenge that threatens the lives of the people she loves. Every character in this book is great! We were reunited with some old friends and a few new people pop up, too. (Troll and Electra were my favs though!) Also, all the powers the type zero telepaths had were awesome and added a fun element to the story. There's even some romance woven into the book but I'm not going to say much about that because *spoilers* - but it's pretty great! ;) There are SO many twists and revelations - sooo intense to read! And Hunter quickly finds her way into her mother's arms but not in a pleasant way.. It was disheartening because she has to learn how to battler her inner demons while in her mother's presence. Hunter goes through constant tests of how she can hold on to who she is when everything pushes her closer to something she's not.. How does she fight off the evil? Her character development was perfect! She just wants to live (like every other telepath) peacefully.. So the question is - will she ever have that? Seeker wraps up nicely but sets up the next one in a great way! Sarai Henderson's writing is still wonderful. I am a huge fan of the details she gives especially when it comes to all the fantasy elements! If you're looking for an intense, fantasy series then I recommend checking these books out!

I really enjoyed the first book and found the sequel to be just as intense, exciting, and engaging as the first. It was great to return to such compelling characters and see old faces, as well as new. There was great tension throughout, thanks to some truly dastardly villains. The action was visceral, brutal, and heart-pounding. There's no question that our beloved telepaths had their hands full as they were trapped, experimented on, and put at risk in highly dangerous missions. And if the ending is anything to go by, things will only get more difficult for them in the future. There were a couple odd spelling errors and some grammar issues, but none of it took me out of the story. I definitely recommend HUNTER and it's new sequel, SEEKER, to anyone who's looking for a fresh, new change on their Young Adult Urban Fantasy shelf. Check it out!

Sasha’s code name is Hunter and she’s a telepath. Along with friends like herself she tries to save those who don’t know how to handle their telepathy and psychic abilities. Unfortunately, there are others who want to capture and use the telepaths for experimentation and also use them for illegal ends. Sasha’s psychic sense is prophetic dreams but she wonders if they are telling the past or the future, and if they are what has happened or what might happen. This is a fascinating story of good and bad, with surprising events popping up when least expected. Well thought out psychic abilities, some I’d never heard of before, piqued the interest and helps the story along. I enjoyed the book although at times the grammatical and spelling errors interrupted the reading flow. I feel the book would benefit from more editing to bring it to a final polished state. Despite this the plot and characters were strong enough to allow me to enjoy the book from beginning to end. originally posted at long and short ya reviews

Life has done an about face for Hunter. Once a teen caught in a swirling vortex of danger and deceit, Hunter has grown, her mind-reading abilities have strengthened as she hones her skills and at seventeen, she is now “the one” everyone looks to at TALON. One painful thing that hasn’t changed, Seeker is still dead and Hunter still blames herself so when agents are being brutally murdered, she is determined that no else will die on her watch and she will be the one to track down the monsters responsible. In a world who fears the superhumans, the list could be long, but when she follows the clues, she finds herself caught up in the “unloving” arms of none other than her own Mommy Dearest and Mommy isn’t playing fair. Forced to become a super puppet in her mother’s evil plot to create murderous monsters, Hunter will discover what pain truly is as a ghost from her past re-enters her life and she finds other “altered” psychics trapped in her mother’s web. Not only must Hunter find a way to survive the hatred of normal humans, she must free herself and her newfound allies from the lab of horrors they live in. Sarai Henderson’s SEEKER is still filled with brilliant dialogue, deep loyalties and now, a much more mature Hunter with the weight of survival heavy on her shoulders. Cringe-worthy scenes, truly diabolical characters and some shocking revelations ramp up the action and intrigue to a fever pitch as, once again, Hunter is in a battle for her life and the lives of those like her. Rest up, because this one is a non-stop, white-knuckle ride from start to finish! Geared for teens, perfect for all ages, great story telling from Sarai Henderson! I received this copy from Sarai Henderson in exchange for my honest review.