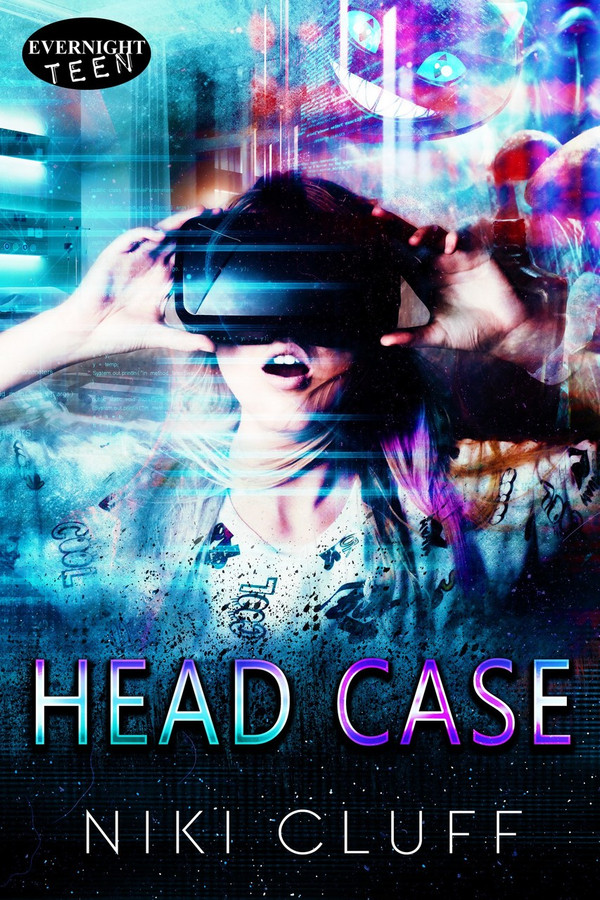 Allyson has been in a coma for the last nine months. What’s worse, she can hear everything the doctors say. She knows they’re keeping her in a coma and that she’s at the mercy of the hospital's First-in-Human trial—a VR system implanted in her brain for a second chance at life.

Attached to the VR, Ally discovers worlds unlike home. She can do whatever she wants, but she misses her parents. With help from Harrison, a rabbit-eared boy, they work together to free themselves from Aishwarya, the mad queen of the world. But when Harrison wakes up and doesn’t come for Ally, she’ll split her soul to the brink of death to save herself.

I’m backed against the wall and alone with no way out. Harrison and Chester led me into a trap. I’m the only threat to Aishwarya here because I’m the only one who can alter her world. Or end it.

“I didn’t do anything,” I say, looking for anything I can use to protect myself with. She has no way of knowing that I’d given up on going back. That I’d decided to be happy here. There’s nothing around me. The only things I have are the tablet and the flask Aalim gave me before we left. Neither can protect me from the shining blade that looks as though it could shred the thick Yellow Pages without even trying.

“He’s gone! I know you visited his parents. I know they were coming for him,” she says. She swings the sword down and I duck, my arms raised above my head as though they could offer some sort of protection. I squeeze my eyes shut, anticipating the coming pain. And I’m also wondering how she found out I visited Harrison’s parents. Only Harrison knew, right? Or had I somehow let it slip to Chester?

Nothing happens. No searing pain or fire burning on my skin the way I imagine the bite of a sword might feel. Gasps rise from the crowd. Is this like a video game? Do I get more lives?

“Not again, Aishwarya,” Chester says through clenched teeth. I open my eyes to see him standing above me. He’s clutching the blade of the sword in one hand, Aishwarya’s arm in the other. Lines of blood drips from his palm to the ground in puddles that almost disappear on the dark flooring. “How many deaths will be enough?”

Coma patients and their families rely on the advice of their doctors. What happens when the doctors they rely on have an agenda of their own, one that has nothing to do with the well being of the patient? Experimental research and programs that will pad pocketbooks exist in every field. Niki Cluff gives us a frightening view of what could happen with mismanaged coma patients! Ally doesn't know how long she has been in the hospital, in this coma, but she does know things aren't right. She can hear what happens around her, and knows the nurses give her medicine to keep her sleeping. Her coma may have started with her accident, but she would have woken up on her own if they hadn't started giving her the shots in her IV. Now things are about to get worse. Ally's doctor has convinced her parents that she would be better off enrolled in a new program. Ally will need a surgery to have a chip inserted into her brain stem, after that she will be able to join a VR. The doctor's main selling points to her parents were that Ally could lead a "normal" life even if only in a virtual reality, go to school, pursue a career, have friends, instead of just laying in a bed in the dark. How can Ally trust anything this man says, when he is the one keeping her in a coma? How many others is this happening to? Join Ally in her VR and find out if it is a paradise or a prison. I was gifted a copy of this book and am voluntarily leaving a review.

Great read, well written with a great plot and characters. I really enjoyed this read! Ally is really relatable she is a drum major, she is into anime, video games and loves computer programming. The Dr's are telling Ally's family that she will lead a normal life in VR. But, do the Dr's have their own agenda? Ally is in a coma and she is going to have a surgery for a chip to be put in her brainstem that will allow VR. I also like Chester and Harrison whom Ally meets in VR. There is a ciffhanger so hopefully there will be another book. This is a unique take on Alice in Wonderland, and I loved it! I voluntarily read and reviewed an Advanced Reader Copy of this book.

When Allyson is being forcefully kept in a coma for the benefit of the hospital, all she can do is lie there and listen to what is going on around her. Unable to tell her worried parents what is really happening, Ally is helpless as she overhears them agree to a decision that will place her in a new virtual reality program that's for coma patients to participate in which allows them to live a life, albeit a fake one. With no way of telling anyone what is really going on, Allyson is whisked away and undergoes a surgery to have a chip implanted in her. "Welcome to your simulated world. Would you like to play the tutorial?" Upon her arrival in the new virtual world, Ally is introduced to many other players. Among them are Chester, a cat-like mischievous boy and a rabbit-eared Harrison who Ally can't help but feel like she knows. When the self-proclaimed red queen of this new world meets Ally, Ally discovers this world is not the safe haven it appears to be and that although the world is fake in many aspects, some consequences can be very real. This was a really fun book to read! I was not expecting it to be a spin on the classic Alice in Wonderland but was pleasantly surprised. Ally is a great protagonist, real and likable and the side characters were great also. I wish the character development could have gone a bit more into depth, specifically, Ally’s hacking skills. I feel it would’ve really added to the story. The pacing was a bit all over with it being slow, then quick, then just right. However, the setting of the virtual world was described very realistically and Niki’s writing is vivid and thorough. I loved the ending and with that cliffhanger I am hoping for a sequel! *I received this book for free from the author in exchange for an honest review* Thank you Niki for the opportunity to read this!

In exchange for an honest review, new and up-and-coming author, Niki Cluff, provided me a free digital ARC of her newest YA novel, Head Case! My Thoughts When Niki first reached out to me about reading and reviewing Head Case, I was so excited! An author actually liked one of my reviews and reached out to me, a newbie blogger and reviewer! Even better, when I read the blurb for Head Case and felt an Alice in Wonderland vibe coming off of it, I knew that I just had to read this book. First off, I’m just going to say that I really loved and enjoyed this book! It was fun and I felt a connection to Ally, the main character. Personally, she felt real to me, with her being a drum major (I was in my marching band’s color guard), her love of video games and anime, and her love of computer programming. Okay, I don’t love computer programming, but I am interested in it. Second, I not only LOVED the Animal/Human characters of Chester and Harrison, but I felt like the author drew on a love for fantasy anime to create an image of these guys. Regardless of my fascination with animal/human hybrids, I also LOVE the Cheshire Cat! I loved how Chester embodies what I would imagine a human cat would be, aloof but loyal when it counts. I recommend this book to anyone who loves an Alice in Wonderland type story and would like to see a little Sword Art Online mixed in. My Review I am extremely happy that I had an opportunity to read Head Case! I give Head Case 4.5 Stars for an enjoyable plot line, relatable characters (to me), and for the fact I’ll probably read this one again!