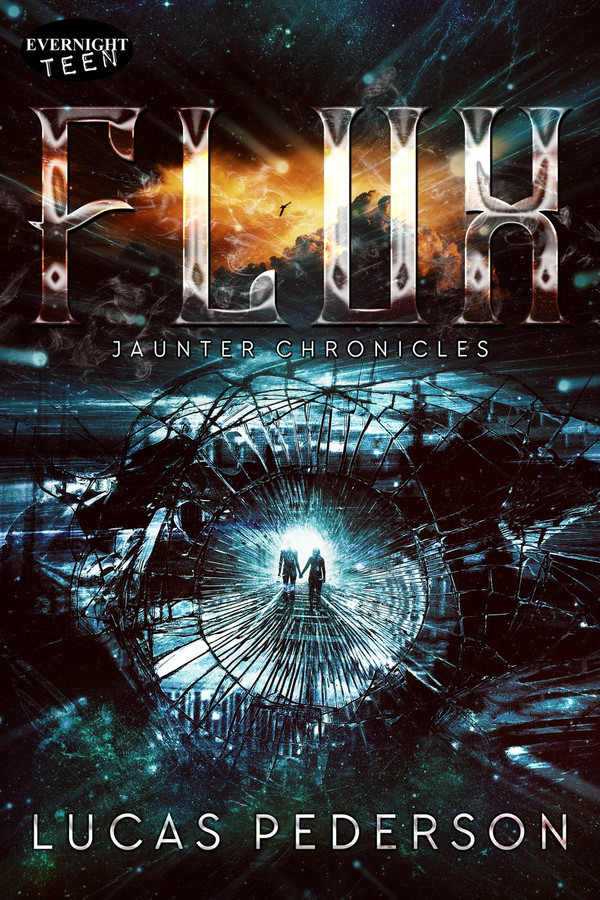 Bullied teenager Addy Decker has had enough of her miserable life. One night, just as she’s about to end it all, a beautiful boy appears in her bathroom, saving her life. At once intrigued and a little scared, she touches the boy and he opens her eyes to a whole different way of life. Addy finds herself in the presence of the Jaunters, a group of people on a mission to magically time travel to the past and save people at risk, as every life saved brings new life to the dead world of the future.

Addy is still wrapping her head around it all when her mom is attacked by a Hell Hound. Alongside her new companions, Addy jaunts to save her, but one of them disappears with Addy’s mom to an unknown destination. Now it’s a race against time, in every dimension, to find the rogue Hell Hound, and Addy’s mom, before a plague is unleashed that will infect the fabric of history itself.

A sensation like ragged fingernails scuttled along the nape of her neck. She glanced around her room, and tugged the sleeves of her long-sleeved T-shirt down, covering the pink scars laddering up her left arm. Mostly out of habit. But also, because suddenly, she didn't feel alone. She looked around her bedroom. No one was there. Just her stuff—

The image of Lzzy Hale suddenly blinked back at her from the life-sized poster near the window.

She gasped. Frowning, she stepped closer to the image of her idol. Something was wrong with the poster. Lzzy’s jaw looked too angular, her cheekbones too high, and her nose too broad. Addy moved closer still, squinting. Lzzy’s skin appeared darker than it should, her eyes changed from hazel to a glacial blue. Then she blinked, and it was just Lzzy again.

And I’m seeing shit now, Addy thought as she walked into her bathroom, and shut the door. She ran a bath, water as hot as she could stand it. She read somewhere that hot water helped. The tub didn’t take long to fill.

She slipped her clothes off and got into the tub. Her right hand clutched the steak knife she’d grabbed from the kitchen. The water soothed her, and for a second or two she forgot why she was taking a bath in the first place. The agony of the past year or so stretched out like an ugly, tattered rug, festering with slimy, black mold.

Her lower lip quivered, the corners of her mouth downturned. Tears blurred her vision as she lifted the steak knife and placed the blade on her left wrist, ignoring the scars laddering up the inside of her forearm. No shallow cuts this time. No short release.

Addy pressed the blade down harder, barely noticing the tiny breeze that wisped through the bathroom.

She closed her eyes, drew in a breath, and—

Addy blinked. Through the tears, she made out a dark shape sitting on the hamper near the foot of the tub. The steak knife tumbled out of her hand, and splashed into the water.

The figure didn’t look at her as it said, “You’re too beautiful to do that. It’d be a shame, really.”

A breath caught in her throat, her vision cleared enough now to see the boy. He was cast in the sunlight filtering through the small window.

She crossed her arms over her chest. Water splashed in every direction onto the floor.

“What—who are you? What are you doing in my bathroom?”

"Flux" is an exciting tale about Addy Decker, a girl who once wanted to end it all, until she meets a beautiful boy in her bathroom. I have to say that this was a very thrilling and captivating read. It was very fast-paced, and had me glued to my seat the entire time. My favorite part about this book had to be the world-building and the main character Addy! The author created a lush and beautiful world that was just so creative and interesting. And Addy was amazing! I completely related to her on so many levels, and I love her character growth. In the beginning, she’s this timid, afraid girl, but as the story progresses, she’s becomes this amazing warrior. It was so inspiring and actually just plain awesome really. Overall, it was an amazing read! The characters were all entertaining and real. The world was brilliantly built. The writing was simple yet descriptive, and the pacing was excellent. I highly recommend!

She was bullied enough to finally try the only escape she can think of, but on that fateful night Addy Decker’s life wouldn’t end, it would be forever changed. The girl that once wanted to end it all will become a warrior to save others as she becomes part of a magical group of time travelers called Jaunters whose mission is to save people at risk in the past, people just like her. The world of the future is dead and lives from the past can bring new life to a bleak future. There has always been and will always be good and evil in the world, but when a Hell Hound attacks her mother, the only person to ever stand up for her, Addy knows she will move heaven, earth and time to save her, even as the woman is spirited away by another Jaunter with their own agenda. How can Addy think of the good of the world when her world has just become a living nightmare? FLUX by Lucas Pederson is, in a word, brilliant! Addy’s life has been hard and its beaten her down, but in her newfound world her inner warrior awakens and she learns to take chances, experiment with her powers and good or bad, each new experience is building a fierce young woman with a powerful sense of right and wrong. Lucas Pederson’s world-building is fabulous, alive and his scenes are magical, from their descriptions to the action playing out. The emotions portrayed by these characters, especially Addy are beyond believable and realistic enough to feel them in my very soul. One scene in particular found me thinking, yes, right or wrong, I get what she was feeling, what she was trying to do and I was in knots. Lucas Pederson’s tale is magical fantasy filled with characters who stop just short of jumping off the pages! A fantastic read for any age, but certainly riveting for young adults from cover to cover!

Lucas Pederson weaves a wild tale of jaunters at war with dark creatures threatening the world. I loved the non-stop action! I'm looking forward to the next book in this exciting series.