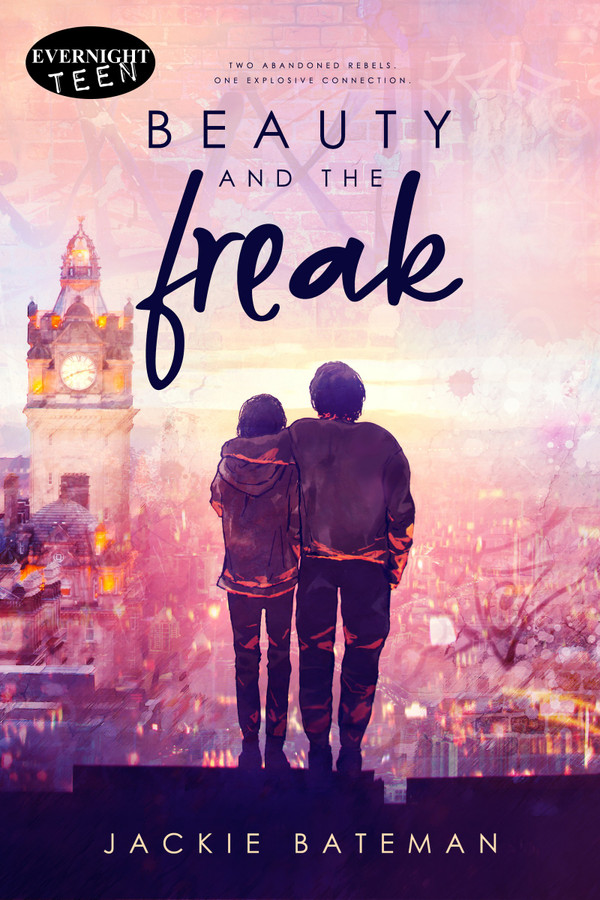 When Robbie faces his community after years of hiding in the shadows, he’s branded a monster. His condition means that his body is freakishly muscular, a bodybuilder gone wrong, where every shifting tendon pulsates. He wants to find Nurse Nola, the one who understood him when doctors performed the endless research that stripped away his childhood. Instead, he finds streetwise Kat who wants to find Nola for different reasons.

When Kat sticks up for Robbie in the face of her gang’s cruel digs, their friendship begins. But when Robbie uses his muscle to rescue her from a violent incident, his blind rage is exposed, and he has the daunting task of earning back her trust. This is the story of improbable love, where the universe unites two fragments of the past to create an extraordinary bond.

16+ due to adult situations, violence

If she was here, there wouldn’t be this mess. I was talking generally, in life, and not just about the scummy kitchen.

Get up, will you, lazy old man? I cracked two eggs into the frying pan and watched them sizzle, fat spitting off the sides. The bacon was getting crispy, and the smell of it would get Dad up eventually. He’d be starving after the night we had. “You’re my bonny wee girl,” he’d say. “Good to me, you are.” He was dead nice to me when I fed him, like a grateful dog.

I had breakfast telly on in the kitchen. Some woman with big hair and a shiny face was going off about wheat being bad for you. What a load of crap. I knew better, and I was only sixteen. No one ever died from eating bread. Face it, you’d more likely die of boredom if you didn’t eat pizza or bacon rolls. There were a lot of weird folk in the world, all scared of their own selves, carrying on like they had nothing better to think about.

I turned up the volume when the ads came on. Come on, Dad. Get your arse out your bed. The remote control was melted at the bottom, where he’d held it too close to the hob trying to light his ciggie in the flame. It still worked, but it looked deformed and wrong. He said he’d get another one, but I couldn’t think where from. Remote Control World. Save On Remote. Not going to happen.

That did it. The volume overload worked its magic.

There was a crash as Dad’s big feet hit the floor. You could hear everything in our place like you were in the same room. The council houses were brown and white, like they were made out of cardboard with globs of school glue in between. All in a row, they looked like a shite school project made by giants.

I turned the sound down and put two slices of bread in the toaster, wiping at some crumbs on the counter with the side of my hand. Some of them went into the crack that Dad hadn’t fixed up yet. It had been growing for about a year, catching hairs and sesame seeds and splashes of oil. Nice one.

I went through to the hallway. “Is that you up?”

He appeared at the top of the stairs, groaning, belly hanging over his boxers. “I feel terrible, Kat. I need a pee, then I’m away back to my bed.” He held on to either side of his head.

What a sight. He was mingin’. I said, “You’re just hungover. Are you not hungry? I’ve made bacon and eggs.”

He heaved. There was this gurgling sound, like he was going to throw up. “Maybe later,” he muttered.

I took a step back, in case. I didn’t want his diced carrots all over the new jeans that I’d got for Christmas. I wanted to wear them again that night, seeing as they made my legs look dead thin.

First, he started coughing up a lung, like he always did in the mornings. He’d chained it at Mack’s place the night before, and his chest was rattling, like he had a tiny popcorn machine inside him. He tried to breathe in, wheezing. He clutched at his hairy chest and bent over, his face going red.

His whole body rocked forward, his feet tipping over the edge of the stairs. I wasn’t proud of this, but my first thought was for my own safety. He wasn’t exactly in shape, my dad, and if he landed on top of me, I’d be as good as dead.

I took another step back. “Dad! Get away from the edge!”

I knew he was going to fall. Before I could say another word, he tumbled down the stairs. What a numpty. I watched it all happening in slow motion. All the years and the long days with just the two of us. The arguing and the cuddling and everything in between. They all came to rest at that moment when I realized he was a hopeless case. He was never going to change, stop drinking too much, and grow up. I needed more than him. I needed her.

Things had come to a head. It was my birthday. I was sixteen and I needed to get out of that house before I imploded, festered, and died in there. There were no bars on the windows, but there might as well be, the way I was kept inside like a prisoner.

Turning onto my good side, I stared at the red numbers on my alarm clock until they blurred into the word Satan. That’d be about right. The devil was in me, raveling tendons together into tight balls of string. I’d been awake, on and off, since 4:17 AM, sweating over the dark side in which I lived. My world was a blur of shadows, blackout blinds, hoods, and closed doors. The darkness had been pressing down on me, squeezing the holy life out of me, for eight years. I should have started a tally on my bedroom wall to mark the days and months and passing years, like some lifer in his prison cell, eating cockroaches and talking to himself. I’d seen the film. I’d seen all the films actually, because the telly was pretty much all I had.

I pulled myself up and sat on the edge of the bed, my punching bag a black shadow on the other side of the room. I’d given it a pummeling hours before, until sweat ran rivers down the ridge in the middle of my back. Now it stood proud, as if nothing had happened. But it had. I’d been hitting that thing forever, it felt like.

4.5 stars. A story both poignant and very realistic, “Beauty and the Freak”, by Jackie Bateman (Evernight Teen), deals with what it means to grow up being drastically different, the power of kindness and compassion, and how adults can learn a lot from suddenly rebellious adolescents. This is such a riveting, engaging story, with two teens as leads, and their lives entangled in a very gray, wet and windy Scottish town. Robbie and Kat are amazing characters, so young yet having already experienced pain, loss and rejection, and becoming more resilient because of it. Robbie’s emotions are so strong and his condition so touching. The stigma, bullying and morbid curiosity are heartbreaking. It’s really unusual (rare) and I loved the way the author gradually revealed details about it. I found that Kat, festy, sweet and wise beyond her years, was the perfect pair for Robbie and likewise his strength, protectiveness and innocence were ideal for her. Some contrasts – Robbie is super strong and super gentle – and contradictions – some of his dreams are so easy to fulfill, yet the total seclusion thwarts them – give the story layers and substance I loved how the author conveyed such a strong sense of place, through visual and other sensory descriptions (a multitude of smells), often articulated with the leads’ emotions and their personal and family drama. The story has some sadness and violence but thankfully a positive outcome. I liked the diversity in terms of characters and experiences and how those differences were reflected in their speech.

Thank you NetGalley for the eARC. This book was very short and I was disappointed because it wanted it to go on and on! I loved every single moment of this story. I was completely invested within minutes! Kudos to the author! I hope to see some books about the brothers. Anything! Bring me back into their world!

The cover doesn't do the book justice. In fact, it doesn't accurately paint Robbie, one of the two protagonists/narrators of the book. Think the Incredible Hulk but without the green skin and the animalistic behavior. Robbie is rather a gentle giant. This book is a modern day retelling of both Beauty and the Beast, and the Hunchback of Notre Dame but with a happy ending and set in Edinburgh, Scotland. The story is about two teenagers, Robbie Jackson and Kat Stewart. Both have problematic fathers. Kat's dad is a deadbeat drunk who relies on her to do all the adult stuff around the house. Her mum left them years ago and Kat doesn't know why. She's tired of being the adult in the house and taking care of her alcoholic father. Meanwhile, Robbie's father is overly protective of him, to the point he imprisons the boy inside the house and never lets him out. Robbie's mum died during childbirth and he was born with a genetic condition that makes his muscles grow without ever stopping (I'm glad the author mentioned the name because plenty of times, many authors use rare genetic conditions for their stories but never names or discusses them). Anyway, Robbie has myostatin related hypertrophy. Because of this, he was constantly bullied in primary school as a kid before he snapped and seriously injured one of his bullies. His dad admitted him to medical experiments to get him treated but an accident from negligence occurred that almost killed him. This caused his dad to shrink back into their house and never let him leave. Years later, bored, depressed, and lonely, Robbie decides to seek the kind nurse who treated him like her own child at the experiments and thus, he meets Kat, that nurse's daughter. The book is short, less than 150 pages. The writing is easy and simple, and that's how I like them. Kat and Robbie are kind people who never resort to violence until left no choice. They acted like teenagers forced to grow up early. The setting felt very bleak, dreary, and scummy, as Kat would call it. But that sets up the underlying tone that although this is a teen's book, it tackles serious issues (see content warning below). There was also plenty of humor and hilarious incidents. I loved Lannie, Kat's no-nonsense blonde best friend. Kat's Granma was also a hilarious and no-nonsense woman. They both bring out the best in both Kat and Robbie. I like how they also are the voices of reasons to the two teenagers. The ending didn't feature a magical cure for Robbie or vibed all rainbows and unicorns. It was realistic and bittersweet. I liked that a lot. Content warning: Suicide attempt, depression, alcoholism, drug addiction, ableism, bullying, sexual assault, physical assault, violence, slut shaming, body shaming, parental verbal abuse, hints of self-harm, food shaming, blood, mention of mugging incident, vomiting, poverty. Thank you, NetGalley and Evernight Teen, for providing me with an eARC in exchange for my honest opinion.