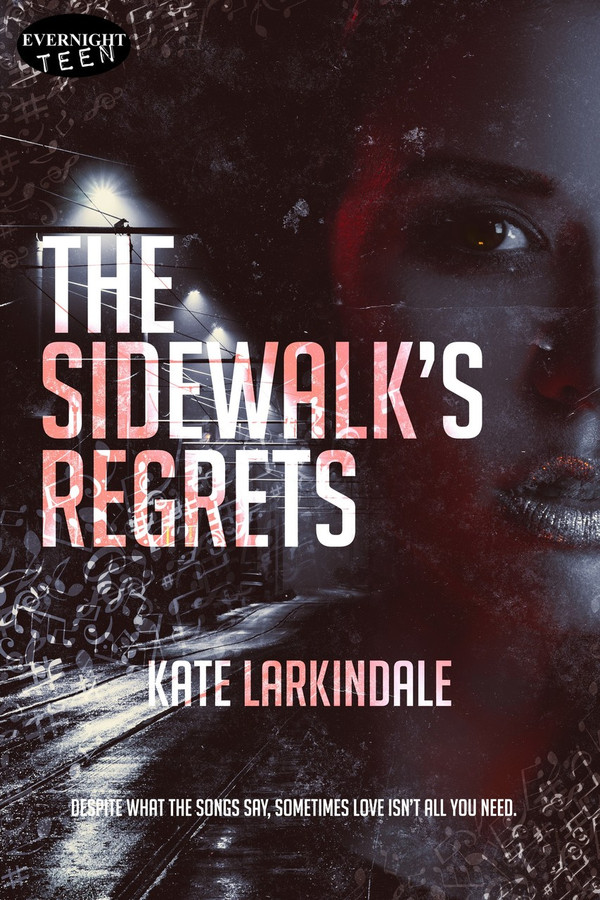 Seventeen-year-old Sacha McLeod isn’t looking for someone to rock her world. But when she hears the boy in the music store play the guitar, the music thrills her and she falls hard for Dylan and his sound.

Sacha finds herself spending less time with her violin and more time with this guy. Her plans for her violin-virtuoso future—and her self-confidence—are shattered when she screws up the audition for a summer music program. Failure isn’t something she’s had to face before, so when Dylan asks her to spend her vacation with him in the city, she lies to her parents, pretends she won a place in the summer school, and secretly moves in with Dylan.

She’s expecting romance, music, and passion, but when she finds herself playing second fiddle to Dylan’s newly acquired drug habit, she realizes despite what the songs say, sometimes love isn’t all you need.

16+ due to drug use, sexuality, and adult situations

I’m comparing the bulk of this string with one of my usual brand when a noise makes me jump. No, not a noise. It’s a wall of noise. A huge tsunami of sound that washes over me and carries me away with it. It wails and shrieks and croons and moans all at the same time. I’ve never heard anything like it. My stomach leaps with something that could be fear or excitement. I can’t tell which. I just know my heartbeat has grown so fast and strong my ribs groan.

As if drawn by a magnet, I’m outside the string room, cutting through the jumbled spaces, the sound growing louder and louder. It reaches into my soul and tears off a piece, carrying it away. What is this music? Can I even call it music?

I stumble into the store’s main room on trembling legs. In the corner, someone is playing an electric guitar. Although playing doesn’t seem like the right word for the way his hands move across the instrument. He’s caressing it. Teasing it. Berating it into creating this otherworldly sound that pummels the walls and assaults my senses. Feedback cackles through the amp and he seems to encourage it, pushing the neck of his instrument closer and closer before tearing it away. Every note burrows into the marrow of my bones, each one digging deeper and deeper until I can’t separate my body from the music swirling around it.

As abruptly as it started, the sound stops. I stagger backward as if the weight of the noise was keeping me upright. I’m still clutching the packages of strings, the paper envelopes growing damp in my palm. My heart raps a staccato rhythm against my ribs and I realize I’m holding my breath.

I was on the fence about how I would feel reading this book. My thoughts would either be love or hate. Turns out I really enjoyed it. I thought Sacha was a believable character who ends up making some tough decisions about her life. This is a young adult book with the subject of drug abuse and alcohol abuse. With lots of real life problems included. Reviewed by Jennifer

I received an advance review copy for free, and I am leaving this review voluntarily. The Sidewalk’s Regrets was a bittersweet, coming of age story. This is not your typical YA Romance, it is so much more! The story shows how easily it is to fall in love and let it dictate your common sense. I loved the dynamic between the characters and how drugs, greed and lies can tear your whole world apart, until you don’t even recognize the person staring back at you!! Dylan a struggling musician falls for straight laced Sacha, a shy and beautiful violinist. They’re love story was sweet and beautiful until it wasn’t . This story was a current of choppy waves, threatening to rip them apart and I held my breath till the end!

This isn’t your typical teen romance. it seems like it when you first start reading. Boy meets girl, boy plays guitar and girl is entranced, mind you, Sacha is no groupie, and what follows is an intense love story that starts innocently enough, but ends in heartbreak. I would classify this book as mature YA bordering on NA due to the subject matter. There is sex, drinking, and drug abuse, and it’s more appropriate for the 18 plus crowd. I just want to throw that out there before you recommend it for your 16-year-old. I myself, obviously well over 18, found the story captivating. The beginning of their relationship was nostalgic and made me long for the throes of first love. Unfortunately, that’s short-lived when Sacha joins her love in the city and finds out he’s developed an alarming habit. What’s a young woman to do? She’s desperately in love and has no experience with any of this. I don’t want to risk spoiling it, but let’s just say I was more than shocked with the turn in direction of the story, but no less enthralled. I found this book well-written, evocative in the extreme, and refreshingly unexpected. The ending really threw me, and if I have any issues with this story, it’s how things ended up for Dylan. Trust me, it’s not what you expect but it sure is more realistic. Still, I had hope for something else. If you like conflict, and realistic drama with your romance, then I think you will enjoy this book too.

This story was so well written and the graphic detail of how easily anyone can become an addict was amazing. I also loved that the family support was always there. I thought the end was poignant and real.

Love can turn you inside out at any age, but especially when you’re young. Finding yourself within that mess can be tough. A resonant message written beautifully!

This one is a good read. It's kind of a heavy read. Sacha is a good girl who spend most of her time playing violin. She meets Dylan at the music store. He plays the guitar in a rock band. They are complete opposites but have a great chemistry. Their relationship builds quick. Dylan's band is gaining popularity and Sacha starts giving up more of herself for Dylan. Sacha is a very relatable girl. At some points I just wanted to shake her and tell her not to follow Dylan. Dylan is a good guy. He isn't mean vicious or mean to Sacha. They both just end up doing things they never planned on. I liked how it all turned out for Sacha but I didn't think I got all the closure I wanted with Dylan.

This is definitely not an easy review to write. I finished reading this book last night, and it keeps going through my mind. And it’s just hard to write down what I really felt about this book. For one, it made me think back to my early teens, which isn’t a time I like to think about at all. Secondly this book made me angry, sad, laugh, overall confused. This book made me feel all sorts of emotions. When a book makes you feel so many different things, not only good things, and makes you want to keep on reading at the same time.. I can only say one thing.. Bravo to the author! In ‘The Sidewalk’s Regrets’ we meet seventeen year old Sacha. Sacha is a musical prodigy who lives a very save and controlled life. All she ever wanted was to be a great violinist. So she practices every day for hours, her parents do everything they can to take her to every class and every event she needs to go, and she doesn’t party or just hangs out. Accept for the occasional girls night with her best friend, but nothing to bad. So when ‘naïve’ Sacha meets guitarist and rock band member Dylan her world changes instantly. Sacha soon finds out her world has been very small, and there is a lot more to figure out. For one rock music, love and bars.. but also drugs and lies. From the moment I started reading I couldn’t put this book down. I just had to know what would happen to Sacha and Dylan. There where many moments while I read this book that I was almost screaming to Sacha, to make her take another decision and to let her see the so obvious signs. But I soon realized that the signs she missed about drug use etc. are probably all signs we wouldn’t see either as a seventeen year old in love. The writing in this book was easy to follow, and kept you hooked to the pages. The romance between Sacha and Dylan was so relatable. I loved reading how in love they were, and how much they wanted to be together even though Sacha’s parents seemed so against it. There love was sweet and intense and I wished so many things for them. And the drugs.. well I’ve never used drugs but as a nurse I’ve seen people with drug addictions. And it’s definitely something that is dangerous, and inviting and just something I wished people wouldn’t have such an easy access too. The author described the ‘high’ in an fascinating way. I could almost understand why someone would want to take another ‘hit’. Almost.. ‘The Sidewalk’s Regrets’ is an intense read that will probably keep me thinking for a while. It’s a lot different from all the romance novels I’ve been reading lately. But this book is definitely a good one. And although I thought about this book as a 4 star read when I finished it.. I’m going for 5 stars! A book that still keeps me thinking about it so much, even after I finished reading it deserves 5 stars.

Chasing the Taillights by Kate Larkindale