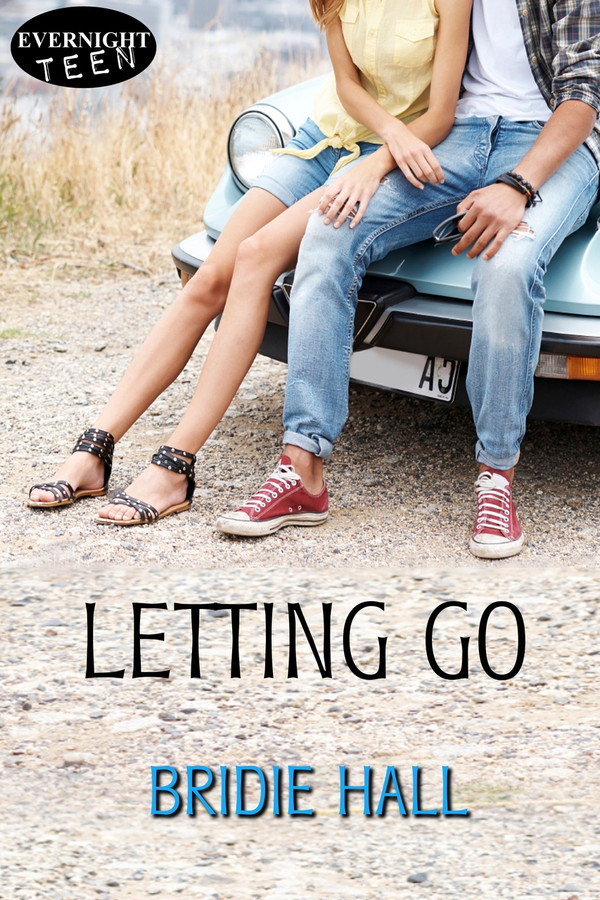 Isabelle is left stranded at the airport, and her only chance of getting home is with her boyfriend’s older brother, Harper. When this good girl and bad boy set off towards home, it turns out that maybe she’s not such a good girl after all. And even bad boys have reasons for their bad behavior.

The road trip is full of shocking revelations and unexpected emotions, bringing the two of them closer than Isabelle ever thought possible. Maybe too close.

They had to use their jackets to shield themselves from the rain as they ran to the car. It was pouring again.

“I’ve had enough of this rain,” Isabelle said.

“It’s been like this the entire week. Freaky weather.”

“At least I got some sunny days in Paris,” Isabelle sighed as she got in and closed the door.

“Did you go see the Luxembourg gardens?” Harper asked and started the car. Driving down the street, he typed a quick message to Missy, and Isabelle itched to give him a lecture on safety.

“I loved them,” she said instead. “I went there almost every day and watched the people. It was almost like a gallery, but the pictures were alive.”

“Did you see kids playing with the sail boats at the basin?”

“Yeah. It was such a nice, calm place. I can imagine going there to relax or cool off.”

“It’s the perfect spot. But then again, every spot in Paris is damn near perfect.”

“Is it my imagination or are you a hopeless romantic?”

He looked at her and smiled crookedly. “It’s an inspiring city, that’s all.”

“Did you visit it alone?” Isabelle asked, smiling.

“Hm. What happened to her?”

“Come on, tell me.” She only half teased him. She wanted to know more about the Harper she’d glimpsed last night when they talked about his family and earlier in Missy’s kitchen. He astounded her, made her curious.

“She ditched me over a physics student,” he said as if he were ashamed of it.

Harper turned to her.

“What? A physics student as opposed to a web designer that can cook? That’s a no brainer.”

“It certainly was a no brainer for her,” he said dryly.

“You cared about her?”

They fell silent. Isabelle mulled over the things she had learnt about him. She’d only dated one boy before Jamie and it wasn’t very serious at all. Still, when he dumped her, her pride was hurt. Chloe went on a mission of returning her self-esteem by taking her on shopping trips where they spent most of their time assessing the boys they saw because neither of them could afford to buy anything. That was how Isabelle first noticed Jamie. He was in front of them in the line at the ice cream place at the mall and she remembered he chose vanilla and chocolate. The ice cream was why she noticed him. She had a habit of choosing the flavors with the wildest colors, so she rarely picked vanilla and chocolate. Jamie, as she learned later, always picked the same flavors.

“Did it hurt?” she now asked Harper.

“I got over it,” he said. But the way he said it answered her question better than the words. She could imagine his heartache and it made her sad. His entire life had been sad, Isabelle thought. She guessed that was one of the reasons for the distance that he created between himself and the people around him by being sarcastic and unkind. He deserved a break. He deserved someone to make him happy. Why was it that some people never got to be happy?

“What’s your favorite ice cream flavor?” she asked, thinking of Jamie standing in line at the mall. When Jamie had turned and smiled at her, she thought he was cute. Decent and good.

“I don’t have one. I always pick a different flavor. Why?”

“Just curious,” she said, her smile tense. “And thanks. For a wonderful morning.”

“See? I told you that you could trust me.”

“I’m beginning to realize that sometimes it’s easier to trust others than myself.”

Glancing at her, he said, “What got you thinking that?”

“I don’t know.” Isabelle looked out of the window into all the rainy greyness. “If you don’t mind a Miss Pageant moment, I’d say that if I had the magic wand, I’d make everyone happy. That would make the world more pleasant and easier to live in.”

“You’d definitely win the pageant, but you could never make everyone happy. Not even with a magic wand.”

“Why not?” she said, frustrated.

He glanced at her, but when she met his eyes, he looked away. “For example, someone will want a sunny day, but their neighbor might like rain. Or to be less prosaic, say, two people are in love with the same person …”

Harper let the rest of the sentence hang in the air. Isabelle froze when his words amalgamated into a coherent sentence in her mind. She didn’t dare guess whom he was talking about. She didn’t respond.

What do you do when your boyfriend&#039;s &quot;bad boy&quot; brother becomes more attractive, and the last thing you want to do is hurt your boyfriend? Hall in &#039;Letting Go&#039; explores the dilemma Isabelle finds herself in when she is stuck on a road trip with her boyfriend&#039;s brother, Harper, ALONE. The more she gets to know him the harder the struggle becomes. Harper is also wrestling with feelings, and a personal story that makes him even more irresistible to Isabelle. An exquisite romance that will pull you in with the dialogue. Find out if these two seemingly opposites (at first) can find a way.

Letting go is a fun and fast paced story about realizing that what one might think is good for him or her is not always what one needs. It is a story that features the favorite romance novel topic of opposite attracts and ‘I love to fight with you because I love you’. After return from her trip to Paris, Isabelle was robbed and forced to return home with her boyfriend’s older brother, Harper. They have this weird love-hate relationship, but after this trip their emotions toward each other became clearer. Overall this is a predictable story, but that did not bother me at all, because there were many other elements of surprise in it. I learned about Isabell’s childhood and Harper’s family dynamic, and how some events in their past shape them. I found Isabell and Harper interesting characters and I like the way they were slowly learning about one another and fall in love in the process. I especially like how ‘playing it safe’ Isabelle learned that for love, you have risk a little. All in all, Letting Go is an enjoyable read. If you are looking for a story with strong emotions, the right amount of drama, and not too much angst, this is a good choice.

Road trips are supposed to provide a sense of adventure without actually exposing the people on them to any real harm. Unfortunately Jason and Levi’s trip isn’t exactly following that rule. As interesting as all of the human characters are, by far my favourite character was Otanewainuku. I’d never heard any legends about the Taniwha before, and it was fascinating to imagine what it would be to meet one of them in person. They are a unique species that fit in well with the rest of the science fiction and paranormal elements of this book. While Jason and Levi’s paranormal abilities are clearly described early on in their adventures, I would have liked to learn more about the origins of them. The handful of hints about where these powers might have come from are intriguing, but the story would have flowed more smoothly had the author taken the time to explain such an important part of their identities. The well-paced, exciting plot made it hard for me to put this novella down. It has the kind of worldbuilding I’d expect from a full-length novel, but each chapter was so engrossing that I finished it within a few days. The plot-based narrative introduces background information as needed, and while there were times when I wished certain details were revealed a little sooner I soon learned to appreciate how the author brings up the most important facts in such a fast-paced story. A Taste of Gold is rollicking adventure that is begging for a sequel. While I don’t know if the author is planning to revisit these characters, I highly recommend getting to know them in the meantime. This is a fun, short tale that this reader had a great time zipping through.

Letting Go by Bridie Hall is a cute and addictive YA contemporary romance, novel - one once I started, couldn&#039;t put down. The story follows Isabelle - a teenage girl who has just returned home from a weeks long trip to Paris. And at the airport her luggage is stolen, leaving her to call her boyfriend for help. The only problem is, her boyfriend is on vacation in Florida and sends his older brother - Harper, to help her. Isabelle has always felt uncomfortable around Harper - maybe because she&#039;s heard some pretty bad things about him, or maybe it&#039;s because deep down, Isabelle knows that there is something between the two of them, that she tries to hide. But with no other choice but to except the help from Harper - the road trip they take is soon to become very intense. I really enjoyed Letting Go. It&#039;s been a while since I&#039;ve dived into a YA contemporary romance novel and this was a great choice. I really enjoyed the way Bridie Hall set the story up and I loved how easy it was to settle into the story - how easy it was to connect to the characters and how intense it quickly became. Isabelle and Harper were very likable characters. Even despite their problems, you could see deep down, they had something special. The problem was Isabelle let her feelings for her boyfriend cloud her judgement - she let his feelings for his brother cloud her judgement too, so she was always judging Harper before she knew the full situation. I&#039;m glad Harper didn&#039;t give up on Isabelle though, most people probably would have with the way she treated him sometimes, but he didn&#039;t and was always so sweet to her, pushing her to step out of her comfort zone and try something new. It wasn&#039;t just a fun road trip, but it was one about finding out who the other person really was, and as you can see, I really enjoyed it. The one thing I noticed about this story was there is a lot of dialogue between the characters. Sometimes it&#039;s needed less, and more of the characters feelings or more back story about her father/mother. It just felt sometimes that the characters were talking and talking forever, but this didn&#039;t affect my overall feelings of the story - I really enjoyed it and it&#039;s certainly worth a read if you&#039;re a fan of this genre. Enjoy!

A Taste of Gold by Deryn Pittar

Until You by Bridie Blake