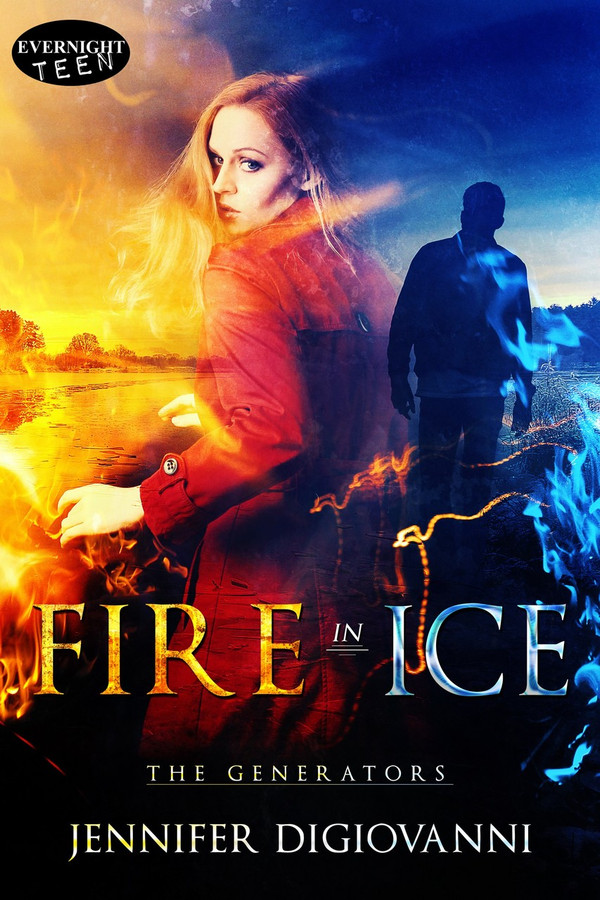 After suffering a rare illness, straight-A student Cara Scotto struggles to deal with lingering side effects. Refusing to admit she can’t handle the disruptions in her otherwise normal life, she tries to move on and heal.

Alexander DeMarsh is unhappy about returning to his small hometown for three weeks. He prefers living in the city, where he attends an elite boarding school far away from his overprotective parents. Sure, they have reason to worry about him. As a Generator, Alex’s body constantly manufactures supernatural energy that’s often difficult to control.

Over winter break, Alex runs into Cara and picks up on the powers they share. Soon, he realizes Cara is the only person in the world who has any chance of understanding him. But first, he needs to find a way to draw out her supernatural abilities without revealing too many secrets of his own.

Pete put a tail on the girl, Cara Scotto. Around ten, I’m sitting in the basement, watching basketball on my super-sized TV, when he calls to tell me the “target” left the movies and arrived at The Firehouse with her friends. Really? That hole in the wall? I’ve never set foot in the joint, but now I need to convince Kyle to go there with me.

I click the remote and the TV snaps off. “I’m bored. Let’s take a ride.”

Kyle doesn’t even bother looking my way. “You want to drive around Amber Lea for no apparent reason?”

“C’mon. My dad claims his new car does zero to eighty in record time. Your team’s losing and I need to get out of this house.” Which is true. I’m ready to explode from all of the energy bottled inside of me. I just don’t want to go to The Firehouse, burst into a ball of flames, and watch the replay on YouTube tomorrow.

Aside from this target-chasing nonsense, winter break has already reared its ugly head in the form of James P. DeMarsh.

Dad found me today and he cut right in with the ‘What are you doing with your life, Alexander? You need to plan, Alexander. Your life is different from everyone else. You can’t assume everything will turn out well without any effort.’

What does he want from me? I get good grades, stay out of trouble—most of the time—and show up for all of his mandatory social functions to act the part of my dignified, charming self. Yes, I have issues, but so does everyone else in the world. I just don’t revolve my life around my issues the way he does.

After five minutes of trash talk, Kyle agrees to ride into town. When I pull up in front of The Firehouse, he starts to laugh.

“You’re kidding, right? This is a joke?”

“No joke, Ky. Pete requested take-out from his favorite joint. I like to keep the big guy happy in case he sees anything incriminating on those cameras of his.”

“Alex. We’re not going in there.” He jerks his thumb at a scrawny guy huffing a cigarette. “Pay that guy to pick up Pete’s effing dinner.”

“Since when are you into bribes?” I cut the engine and shove Kyle against the door of the car. “C’mon. You’re my intimidator.” At least he looks scarier than me with his ridiculous height. I can snap a person in two faster than he can blink, but no one’s supposed to know about that.

Ten minutes of torture to prove Doctor Eric Barnes has no idea what he’s talking about.

We walk into the dive and a hush goes over the crowd, as usual. The locals whisper and point, as usual. I avoid making eye contact with anyone, as usual, just hand the girl behind the counter my card and tell her “Pick-up for DeMarsh.” But if I don’t at least glance around, how will I find her? I forgot to ask Pete what she looks like.

So I decide on my own type of test. I clear my mind and channel my energy. Then, I release a small blip into the atmosphere. Like finds like.

The response is instantaneous. I pick up on the charge released when Cara’s brain shifts into supernatural gear. My eyes dart through the crowd until I find her, trying to act like she’s not looking for me. We zero in on each other and time freezes.

She feels it. Hold up. She feels my energy? She reacted, so she must.

My breath catches in my chest. I need to talk to her. When she looks away, I check out the guy sitting next to her with his glazed eyes focused on the basketball game. I shouldn’t start trouble if she’s with someone else. But I have to say something.

“Let’s go, Alex.” Kyle grabs a stack of pizzas and heads for the door like he’s ready to storm a fort.

As I close in on her table, she purposely avoids eye contact, but I stop anyway.

“Are you Cara Scotto?”

She snaps her attention on me, her green eyes wide under glittery make-up. “Do we know each other?”

Her voice sounds perfectly controlled, low and calm. But I sense the freak-out vibe pulsing out of her.

I reintroduce myself and we exchange a few meaningless sentences. The guy next to her shoots me a hard stare. Kyle barges out of the place, fed up to the point where he’s ready to let me walk home with Pete’s dinner.

I want to ask her if she knows what she’s capable of. I’m guessing by her clueless reaction that the answer is no. She would’ve reacted differently if she understood what we have in common.

Now I have to see her again. Find some way to test her. Just her versus me, no friends along for the ride.

How long can Cara deny her supernatural abilities? Cara is a strong-willed young woman. After recovering from a severe, mysterious illness, she’s unwilling to admit it might have changed her permanently. She pushes past the debilitating headaches determined to live a normal life. Everything seems to be going pretty well for Cara until Alex appears. The moment Alex sees Cara, he knows she’s supernatural like him. When Alex tells Cara about her abilities, he expects her skepticism. He doesn’t expect the spark of attraction that flares to life the moment they touch. Can Alex convince Cara of her true nature before the power becomes too much for her to handle? Cara and Alex are an intense couple. They have an entertaining push and pull relationship in the beginning. Their attraction to each other is unlike anything they’ve ever felt before, and neither are quite sure how to handle it. It was interesting watching them try to figure out not only their romance, but how to manage how their powers react when they are together. I enjoyed the concept of people who are generators, and I think that Cara handled the news realistically. She didn’t automatically accept it, and she was curious but also wary. I will say I found it easy to predict how certain events and conflicts were going to play out. However, I cared enough about Cara and Alex that I wanted to see how their story would end. My patience was rewarded as there was a bit of an unexpected twist at the end. I’m glad I had the opportunity to read Fire in Ice, and I look forward to reading more about Cara and Alex in future installments of this series.

This was a great book! It was a true start to finish, well written story. I was really surprised with this story. It was an attention grabber from the start to the finish. Some parts were more exciting than others, but other parts were more intriguing than others. There really wasn’t a time that was boring nor was there a time that the story was “skim through” worthy. It is a story you’ll want to read from the first word to the last word. Details and descriptions were great. They were written in such a manner that you didn’t ever guess what was going on in the story, but also never overdone. This story wasn’t filled with “extras” that just padded the word count. It painted a detailed picture, easy to visualize, and easy to keep playing in your mind. I loved the fantasy portion of this story. It’s always fun to me to read a story that is fantasy but isn’t so far into the fantasy genre that it’s unimaginable. While I realize it was fake, it was still fun to think about. The characters were great! They meshed well and were characters that you’d want to know. If they were real, they would be the type of people I’d like to hang out with and get to know. I’d love to read more about them in future stories. Overall, an absolutely incredible read. It was fast paced, easy to follow, and one that held my attention. I recommend this book without a second guess. * A copy of this book was provided to me with no requirements for a review. I voluntarily read this book, and my comments here are my honest opinion. *

He is like a livewire, filled with a supernatural energy he has always struggled to control. Alexander is also the son to the wealthy and privileged family who lives in seclusion in the small town. Cara is struggling with some unusual side effects from a recent illness. When she and Alex, the mysterious town heartthrob meet, more than sparks of attraction will fly as their powers both attract and repel each other. Now Alex must help Cara learn to understand and control the powers she has been given. Neither expected the emotional bond that would grow between the rich “player “ and the small town girl who was as innocent and down to earth as she was charming. When Cara’s abilities are sought by an evil entity, they will find that even all of the protection that Alex’s family could buy will not be enough to keep her safe. FIRE IN ICE by Jennifer DiGiovanni is a slightly different twist on supernatural abilities with a slow burning romance between two teens that makes for a wonderful read and a solid start for a new series, The Generators. Written for a young adult audience, there are great supporting characters of all ages, a realistic feel as the characters interact with one another! Easy to follow, just enough tension to move the story along fabulously and of course, the villain who hides in the shadows to make his move! I received a complimentary copy from Evernight Teen!

I love superhero stories! This was a great origin story of Cara, who reluctantly learns that she has superpowers from a hot guy she wants nothing to do with. It goes beyond just her origins and has a twisty-turny adventure thrown in, as well as a rich history of the superpowers in question. The superpowers in this world are original and uniquely written, perfect for people who love superheroes or people who have never read them before. I loved watching Cara and Alex&#039;s relationship grow and see how Cara changes as a person throughout the book. I&#039;m very much looking forward to the second one!