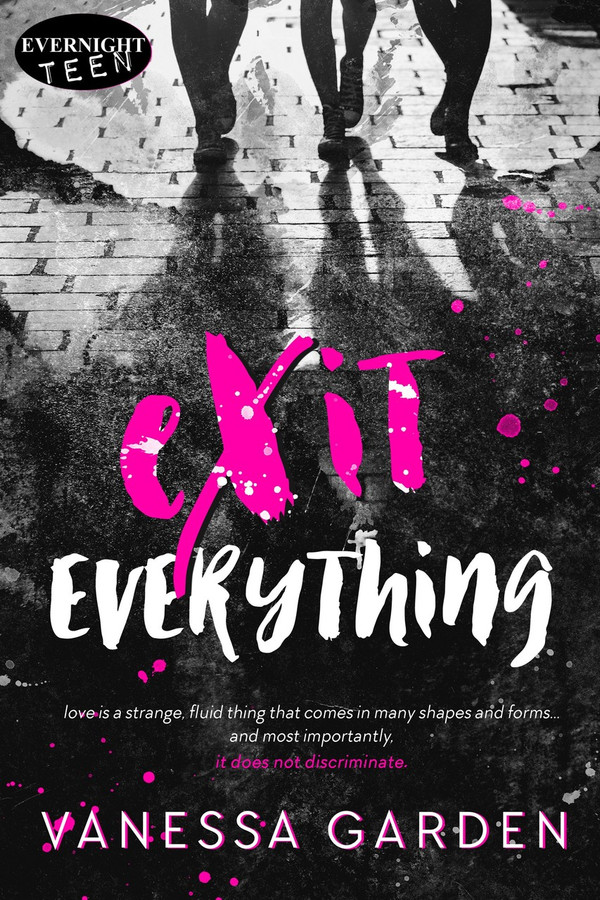 Ronnie was born without her left hand.

All three teens are looking for something … they just aren’t sure what that something is.

When the unlikely trio go on a road-trip with only their love of late post-punk guitar legend Rowland S. Howard in common, something happens.

They leave on Friday as strangers, but return home Monday forever changed ... and maybe even a little in love.

But what if the one you’re falling for is in love with another?

The trio are about to discover that love is a strange, fluid thing that comes in many shapes and forms … and most importantly, it does not discriminate.

14+ due to sexuality, adult situations

He looked up to find her smiling gently.

“Would you kiss me? I mean, can I kiss you?” he asked, hating the desperation in his voice.

The smile died. She frowned slightly. “Um, okay. I suppose.”

He pressed his lips to hers and her mouth parted when he pressed his tongue against her lips. She was wet and warm. It felt nice and he managed to get a tiny bit hard, but he pulled away when he thought about how much her friendship meant to him. What the hell was he doing? This was Ronnie, he reminded himself. She didn’t deserve getting screwed around.

“What the hell is going on?”

Harlon stood in the doorway, his hair damp and the top of his white shirt wet down to his chest.

Seth stood up, his heart thrashing against his chest. He’d never kissed a boy before. He’d kissed a girl. Maybe it was time to kiss a boy and find out once and for all if his attraction to men was real or just a fantasy inside his head.

“Harlon,” he said, not recognizing his own voice, husky and gravelly after the ugly cry only moments ago. “Can I please…” Woah. He exhaled. “Can … can I please kiss you? I just wanna be sure.”

Ronnie caught Harlon’s eye and he raised his brows ever so slightly in either a silent plea for assistance or out of genuine concern for Seth. Most likely both.

Seth sat back down, trembling on the edge of the bed, his face pale, looking completely vulnerable in Ronnie’s dad’s oversized clothing. He pressed the balls of his palms into his eyes and sucked in a deep breath. “Sorry. Forget I even said that,” he said, his voice cracking beneath the weight of his sorrow. “I’m such a fucking idiot.”

After a long, painful silence, during which only the rain lashing against the house could be heard, Harlon cleared his throat. “I don’t mind … d-d-doing it, kissing you if you n-need me to.” Concern softened Harlon’s pointy features and Ronnie couldn’t help but notice the way the scars on his face darkened when strong emotions seized hold of him.

Seth wiped at his eyes again. He was no longer pale but an intense shade of red. He kept his head down and stared at his bare feet. Ronnie’s dad’s trousers were far too long for him.

“You don’t have to,” he said, but Ronnie could hear the hope in his voice.

Harlon gave Ronnie a single wide-eyed stare of alarm before he drew in a deep breath and sat down beside Seth. “Just once,” said Harlon, his intense, vivid blue eyes fixed on Ronnie. “And only because you’re a mate.”

Seth nodded and wiped his eyes once more. “A few seconds and I’ll know,” he said and shrugged. “Who knows? Maybe I’m not gay at all. My dad could be right.” When he locked eyes with Harlon, Seth’s chest started to rise and fall with sharp, short breaths.

Ronnie wanted to turn away, give them some privacy, but froze, captivated, as Seth leaned in and pressed his full, perfectly shaped lips against Harlon’s.

At first, Harlon remained stiff, his lips a thin line, but then he softened to Seth’s attention and when he did, it was like somebody had flicked a switch inside of Seth, who responded by kissing Harlon more hungrily. Seth brought a trembling hand to Harlon’s jaw and caressed it, all the while breathing heavily through his nostrils like some kind of wild animal.

Ronnie gasped and felt her heart stutter as her warm pulse throbbed. Watching the boys kiss was … well, it was kind of hot.

Harlon abruptly pulled away and stood, catching his breath.

He wiped his mouth and locked eyes with Ronnie, looking at her with dark longing in his eyes, as though he wanted Ronnie to put her mouth to his and kiss all the Seth away.

Ronnie ached to do just that.

“Sorry, Harlon,” said Seth, catching his own breath, his cheeks flushed, a small smile curving his lips. “For going a little crazy there.” He stared back down at his feet and mouthed a ‘wow’ before looking up at Ronnie. “I guess my dad was wrong. I’m definitely gay.” He shook his head, the smile of bewilderment still on his lips. “Shit.”

Outside, the rain poured and a fierce wind rattled the bedroom window.

The room remained dim except for the occasional flashes of lightening.

“This is a good thing,” said Ronnie. “At least you know for sure now.”

“I knew anyway, mate. Always knew,” said Harlon, who had moved to Ronnie’s dressing table to look at the pictures she’d stuck along the fringe of the mirror. Half of them were of Rowland S. Howard, in his younger days, where he looked a lot like Harlon did now.

“My dad will disown me.” Seth flopped back onto the bed.

Ronnie joined him and lay beside him. “Come, Harlon,” she said, patting the empty side of the bed.

I had to read this book after seeing the title and recognizing it as being the name of one of my favorite songs. Set in Australia, the book follows three kids who have never really fit in at school. They don't really know each other despite having been in classes together since they were little kids, but wind up going on a road trip together that changes their lives. Bound together by their mutual of love of a singular artist, they hit the road without any real direction in mind. They just want out. Out of town, out of their lives, just out. Interestingly, the road trip isn't that exciting. Not a lot happens except some drinking and one brief act of violence that is diffused far too quickly to feel very perilous. Yet the way the dynamic between the three characters plays out is interesting. There's a definite love triangle going on, and more than once the possibility of a threesome is mentioned, although this doesn't actually ever happen. And these are interesting characters. They could be more distinctive in their individual voices, but their issues and the problems they are running from are real and feel genuine. These are people who would definitely drown their sorrows in screeching guitars and blazes of feedback. If you're looking for a story about outsiders finding a community of their own, this is one of those stories.